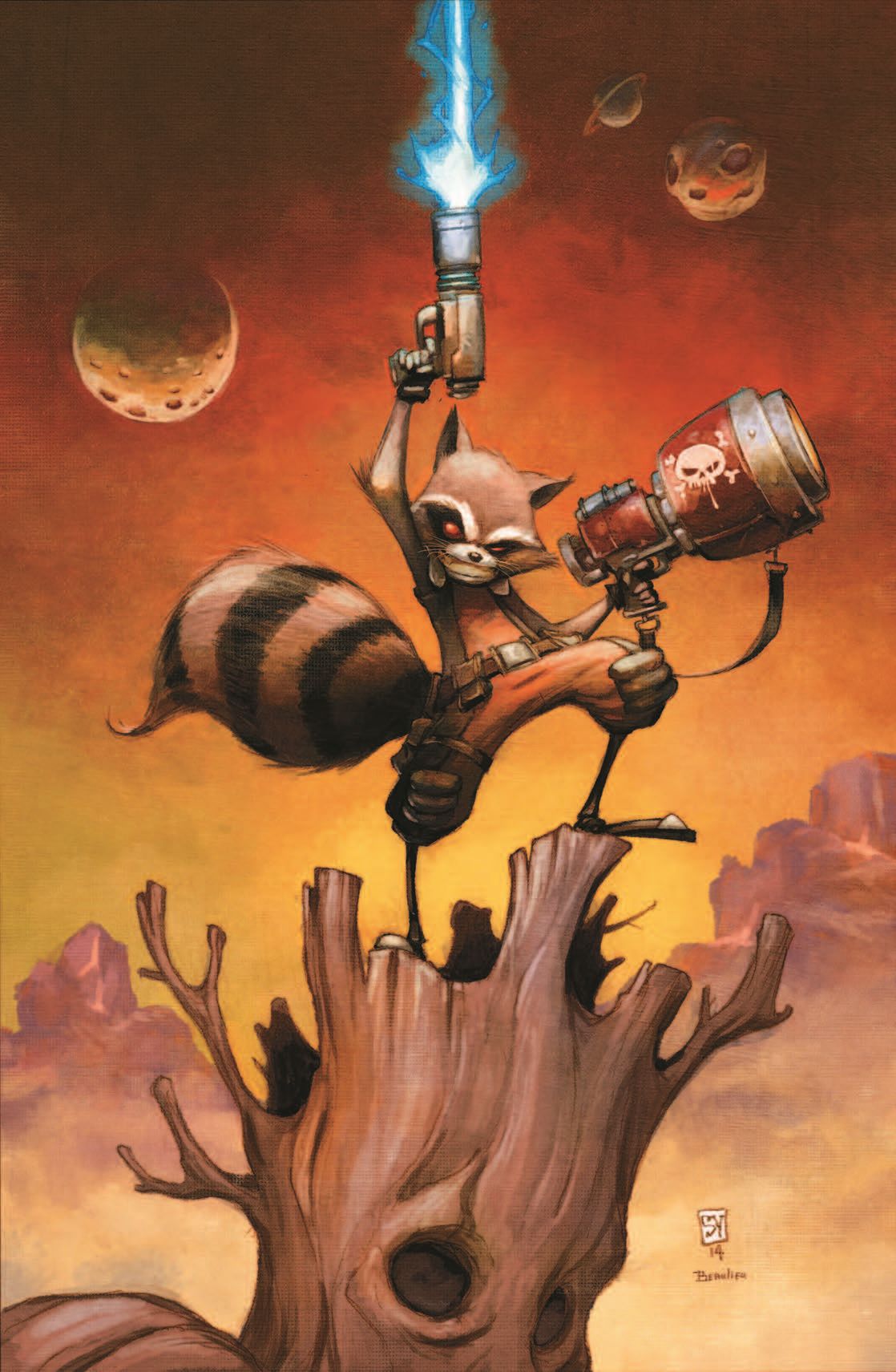 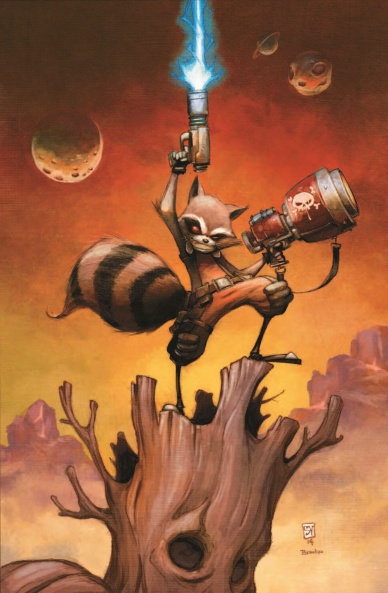 Announced via MTV, it looks like Rocket Raccoon has decided he needs his own book, and he’s hired Skottie Young to do it. (Or something along those lines.)

Clearly banking on the assumed success of Guardians based on the previous success of “Guardians,” Marvel will be launching a new solo book for Rocket that appears to be an ongoing, and not a mini like what DnA did previously in the latter-half of “Annihilators.” What’s interesting here is that Young apparently has carte blanche to not even try and make Rocket like the movie-version, which (taking a look at the current “Guardians” book) is probably a blessing in disguise. In fact, to quote Young directly,

“I think it’s going to have a connection to that nostalgic feeling for ‘Looney Tunes,’ that old animated flavor where everything wasn’t squeaky clean, you know? Daffy Duck would get his bill blasted off with double barrel shotguns… That’s what I grew up watching, and being able to play around with that in this hyper-superhero intergalactic universe will be a lot of fun.”

So really, this is pretty excellent — and it’s honestly nice to see Skottie Young get work that doesn’t involve just drawing baby versions of popular heroes. Young has had a few comics through Marvel that he’s written and they’ve all been pretty enjoyable, so we’ll definitely be looking forward to what he can do with everyone’s favorite bad-mouthed murdering sociopath alien-that’s-not-actually-a-raccoon-but-is-still-called-a-raccoon.

Update: Now with a preview and a press release! 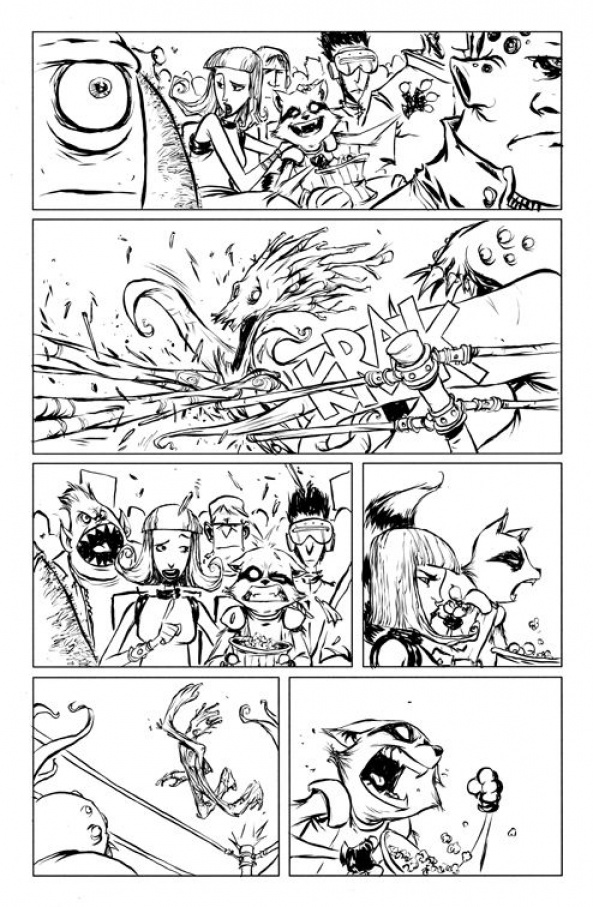 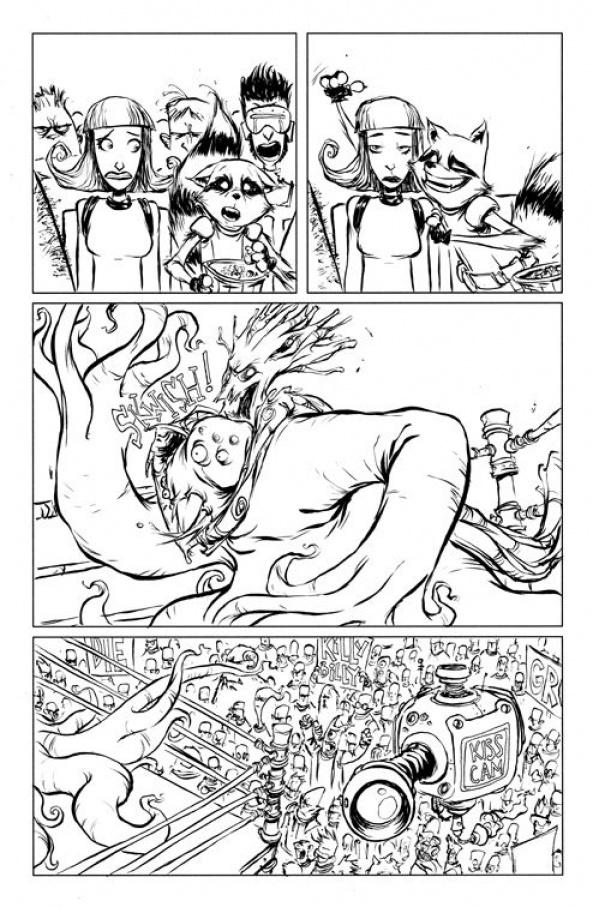 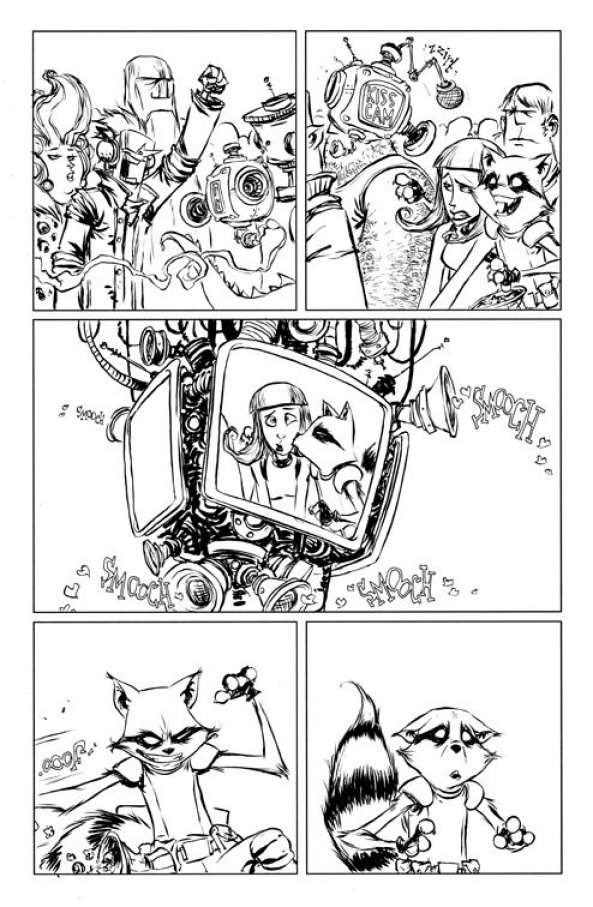 This July, blast off with the fuzziest Guardian of the Galaxy in ROCKET RACCOON #1 – an all-new ongoing series from Eisner Award winning fan-favorite Skottie Young! And you’ve never seen Rocket like this before!

As defenders of the cosmos go, Rocket Raccoon has faced his fair share of galactic battles. He’s been a hero to the weak, a champion of the good, a protector to the innocent, and a heartthrob to many intergalactic species across the cosmos. But is he ready to be a raccoon on the run?!

Rocket’s high-flying life of adventure and heroism may soon be a thing of the past when he becomes framed for something he didn’t do! And the authorities aren’t the only ones hot on his TAIL! (Yeah, we went there.)

“I figure that a guy like Rocket, with his attitude, has swindled his way over many planets and charmed many ladies,” says writer/artist Skottie Young. “He’s racked up a malitia of ex-girlfriends I’m dubbing the Exterminators. They’re all fed up and they’ve decided it’s time they dish out some payback on his furry little tail.”

With his pal Groot at his side, Rocket will have to blast his way out of trouble (and blast his way into some) if he wants to clear his name. Along the way he’ll tussle with some of the fiercest creatures in the known galaxy! But they’re about to bite off more than they can chew if they think they can go toe-to-paw against the shortest Guardian with the biggest gun!