DC’s full solicitations for July won’t be out until Monday, April 17, but we’ve got an exclusive first look at the Young Animal titles for that month. Young Animal has been one of the most successful DC experiments of recent memory, mixing dynamic creators with stories that blur the line between the classic DC Universe, the tone of early 1990’s Vertigo, and a freewheeling, independent spirit that consistently surprises.

Thanks to DC for giving us this sneak peek, and make sure to grab the books come July! 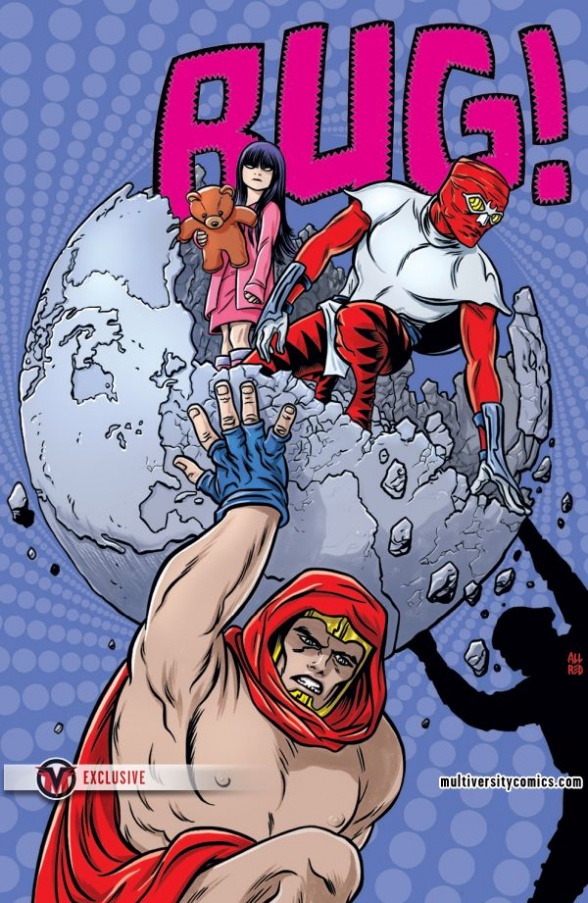 BUG!: THE ADVENTURES OF FORAGER #3
Written by LEE ALLRED—Art and cover by MICHAEL ALLRED—Backup story and art by JAMES HARVEY—Variant cover by AARON CONLEY
Forager’s latest tumble through time and space lands him in a rough wilderness. There he meets the muscleman Atlas, who himself has run afoul of Chagra, the mysterious figure that caused the reality shards that put Forager on this multidimensional trip to begin with. What happens when a Bug of New Genesis teams up with a legendary powerhouse like Atlas? It’s a story we could only call “Atlas Bugged”!
On sale JULY 5 • 32 pg, FC, 3 of 6, $3.99 US • MATURE READERS 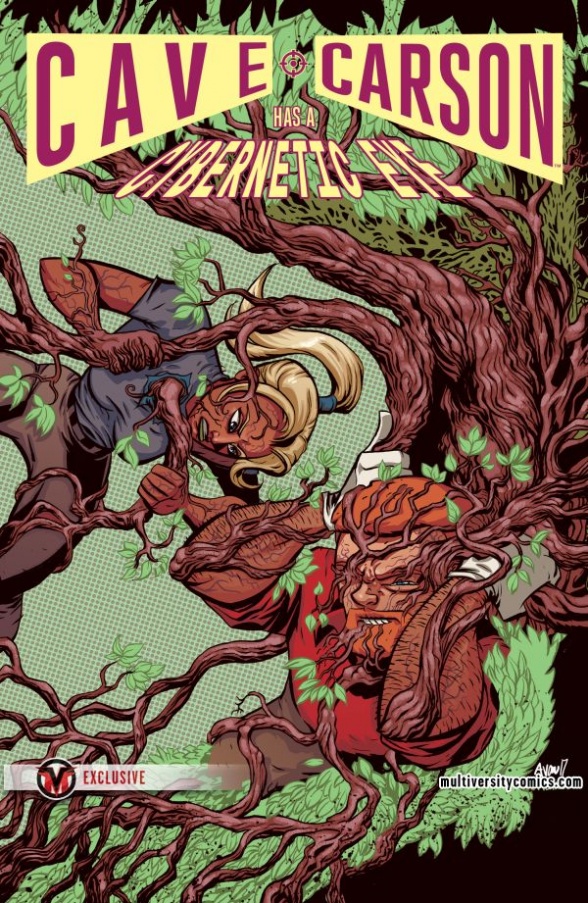 CAVE CARSON HAS A CYBERNETIC EYE #10
Written by GERARD WAY and JON RIVERA—Art and cover by MICHAEL AVON OEMING—Backup story written by MARK RUSSELL—Backup story art by BENJAMIN DEWEY and BRANDON BIRD—Variant cover by BENJAMIN DEWEY
Things aren’t just weird for Team Carson, they’re mega- weird, as their trans-dimensional adventure brings them to a world unlike any they have ever seen before (with or without cybernetic enhancement!), filled with sentient plant life and megafauna. Plus, a new installment of “The Wonderful World of Rocks with Marc Bartow” by Mark Russell (THE FLINTSTONES) and Benjamin Dewey (Autumnlands) and “Bane’s Coloring Corner” by Brandon Bird!
On sale JULY 19 • 32 pg, FC, $3.99 US • MATURE READERS 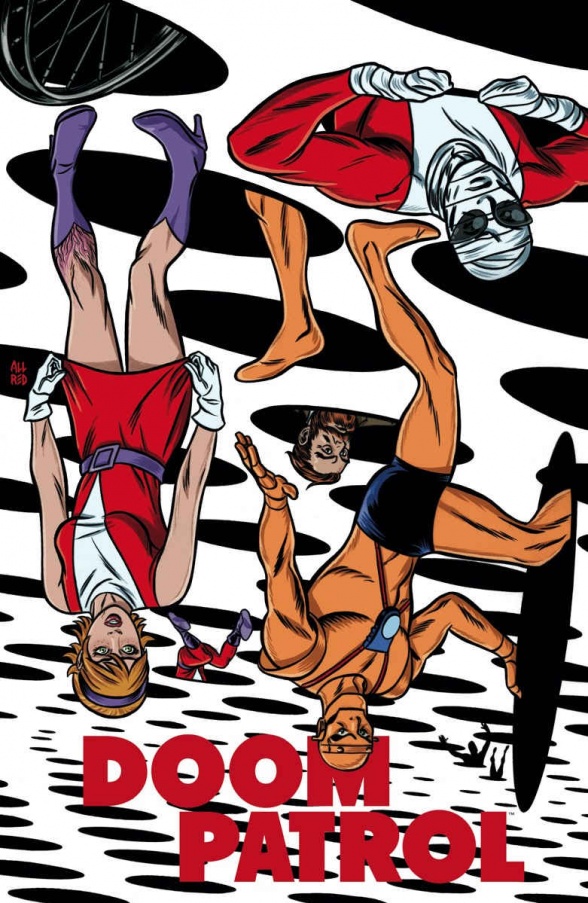 DOOM PATROL #7
Written by GERARD WAY—Art by MICHAEL ALLRED—Cover by MICHAEL ALLRED—Variant cover by NICK DERINGTON
How have you been, Niles Caulder? The Chief is back, and he’s ready to reshape the new Doom Patrol to be just like the old Doom Patrol—a prospect not everyone is happy with. But the team’s former leader hasn’t grown less manipulative in his old age, so nobody make any rash decisions. Pretty sure he’s up to something. Michael Allred (iZOMBIE, Silver Surfer) joins the team for this special issue.
RESOLICIT • On sale JULY 26, 32 pg, FC, $3.99 US • MATURE READERS 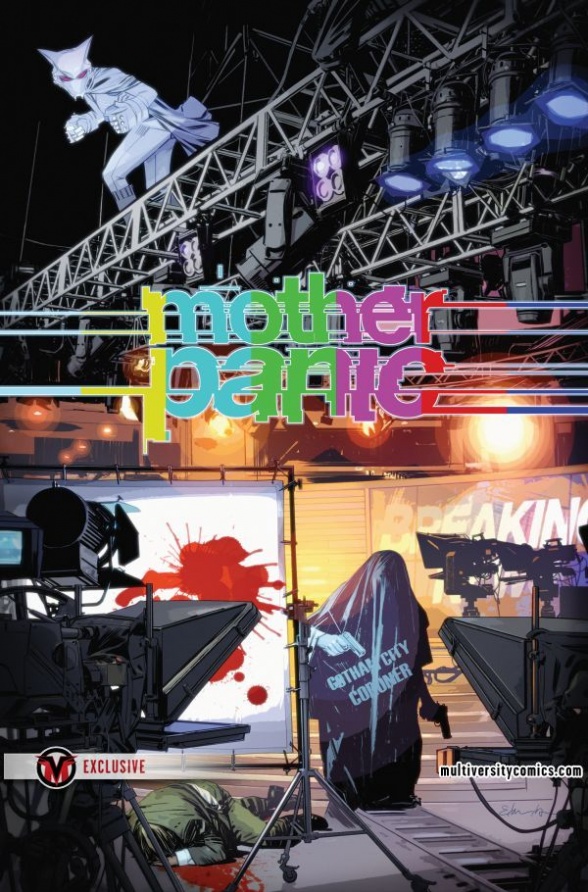 MOTHER PANIC #9
Written by JODY HOUSER—Art by JOHN PAUL LEON—Backup story written by JIM KRUEGER—Backup story art by PHIL HESTER—Cover by TOMMY LEE EDWARDS—Variant cover by PHIL HESTER
As Mother Panic zeroes in on Remains, Violet’s augmentations continue to lock up, making her unbelievably vulnerable. Will she be able to defeat her mysterious nemesis in time, or will Dr. Varma’s warnings and predictions finally be actualized? Also includes the next installment of “Gotham Radio” by Jim Krueger (JUSTICE) and Phil Hester (GREEN ARROW)!
On sale JULY 26 • 32 pg, FC, $3.99 US • MATURE READERS 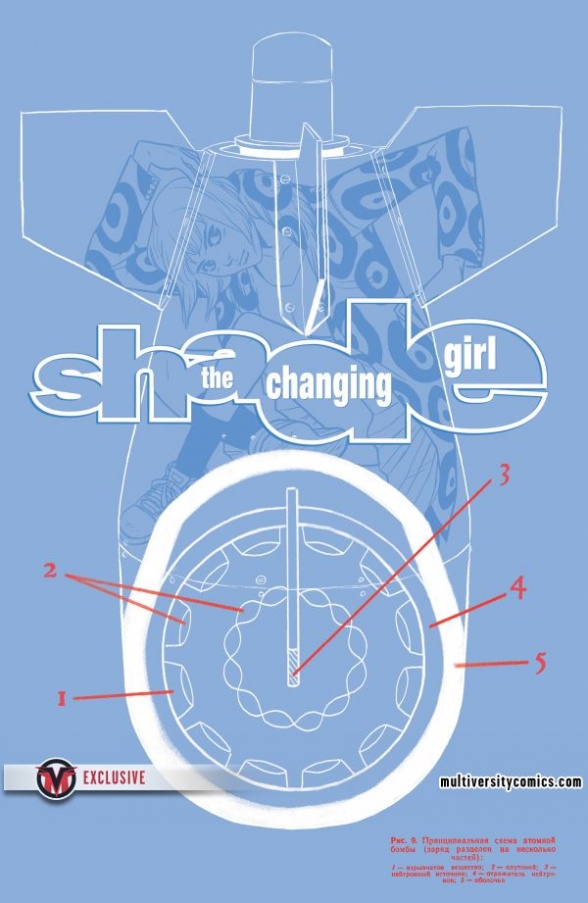 SHADE, THE CHANGING GIRL #10
Written by CECIL CASTELLUCCI—Art by MARLEY ZARCONE and ANDE PARKS—Backup story art by LEILA DEL DUCA—Cover by BECKY CLOONAN—Variant cover by JILL THOMPSON
Following her encounters in Gotham City, Shade decides to head out west and check out Los Alamos, New Mexico, the one-time location of nuclear test sites, and also the setting of her favorite TV show, “Life with Honey.” But it’s been half a century since those bombs went off—and since “Honey” went off the air. So what kind of ghostly memories await Shade in the desert? Plus, a brand new “Life with Honey” backup story.
On sale JULY 5 • 32 pg, FC, $3.99 US • MATURE READERS