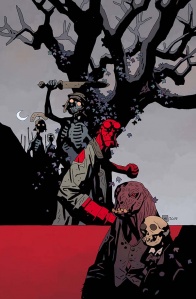 As Hellboy continues his journey across England with his mentor, he confronts some of the most horrible figures of British folklore—Rawhead Rex and Bloody Bones.

First up, if you’re new to the Hellboy universe, then Hellboy and the B.P.R.D. is proving itself to be a fantastic introduction—1953 even more than 1952 was. These stories are light on the big mythology stuff, but heavy on mood, character, and fun.

I quite enjoyed the last issue of Hellboy and the B.P.R.D., but I enjoyed this one more. I said it previously in my last review, but I think it bears repeating that Hellboy and Professor Bruttenholm together in a comic make for an interesting read. The two are are such different characters: Hellboy is young and impulsive, Bruttenholm is older and measured. Hellboy is like a sledgehammer, blunt and powerful; Bruttenholm is a like scalpel, sharp and precise.

In the last issue, Hellboy got to fight a demon-infested phantom hand and Bruttenholm dealt with a kelpie. While both interactions were compelling, ultimately they dealt with these problems alone. However, in the first story in this issue, The Witch Tree, we get to see the two of them working together, and I must say, they make a effective team! And they make great humor too.

The Witch Tree is certainly my favorite. It’s got the folklore in there, the odd locals, and an undead witch. All good things. But it also adds to the grander Hellboy Universe mythology, something I’ll talk about when I get to the spoilers portion of the review. The Witch Tree is a story that stands alone, but just like that fan-favorite story The Corpse, it has connective elements that could be used in other stories. I have my fingers crossed.

Ben Stenbeck obviously had fun with this. I mean, given what he got to draw in the latter half of the story, how could he not? The fight sequence was great. And it was so awesome to see Bruttenholm in the fray with Hellboy, fighting side by side. Don’t let the exterior fool you; Bruttenholm is handy in a fight.

And those Roman skeletons looked great. I mean, I think most artists would have treated them as a horde of relatively identical skeletons, but not Stenbeck. Some have got some face still clinging to bone or a patch of moldering hair on their scalp. Others have missing teeth or an unhinged jaw. He breathes character into these guys.

Then there’s Rawhead and Bloody Bones (or should I say Mr Stump and Dr Tolliver?). This was the shorter story of the two, but Stenbeck and Mignola wring a lot from only six pages. I can’t say much about this story without ruining it, save that it builds very well and the pay-off is perfect. Classic Mignola.

Well, it’s reached this point far more quickly than I expected. It’s rapidly becoming difficult to talk around spoilers, so if want to avoid them, jump to the end.

OK, let’s get back to The Witch Tree.

Ogdru Hem again! First in 1952, now here. These creatures are already showing up surprisingly often. Hellboy’s arrival on Earth has stirred them up, it seems.

And the way this Ogdru Hem transformed the witch tree, that was truly something to behold, especially with all those eyes on the trunk. There were several panels there that I imagine Mignola laid out, because they so definitely have his sense of composition. The first on the final page was one such panel. It is such a striking image to end on, and it feels so much like Mignola… but Stenbeck doesn’t ape Mignola’s style at all, he’s just tremendously good at evoking a Mignola-esque mood.

And how about that reference to Sir Edward Grey? I hope there’s a short Witchfinder story to accompany The Witch Tree some day. Given Stenbeck’s history with the character, it’d be good for him to tackle it too. With only a couple of exceptions, all the Edward Grey stories we’ve had so far have been five-issue miniseries, but I’d sure love to see a bunch of two-issue, one-shot, and short stories with him.

But the best bit of The Witch Tree was seeing Bruttenholm in action, fighting by Hellboy’s side, and then figuring out how to deal with the skeletons and the tree at the same time. And then in Rawhead and Bloody Bones, seeing Bruttenholm save the day by pure dumb luck was a nice counter-balance. He and Hellboy have that in common.

The dynamic between Hellboy and Bruttenholm is something I look forward to seeing evolve over their forty-year history as fellow B.P.R.D. agents.

I had an absolute blast with these short stories. Mignola’s writing was right on point, and Stenbeck’s art was the perfect accompaniment. There’s just the right mix of somber, creepy, and absurd. I laughed a lot throughout this issue, and I’m sorry to see these shorts come to an end so quickly. I could have easily read many more like this.

But then, that’s one of the great things about Hellboy and the B.P.R.D.: this is just the beginning for Hellboy and Bruttenholm. They’re going to have all sorts of adventures all over the world together, and once Bruttenholm resigns as Bureau Director in 1958 (I wonder if there’s a story there?), we’ll get to see him in the field a lot more often.

What I enjoy about Hellboy and the B.P.R.D., more than any other Hellboy Universe series, is that the stories can be practically anything. Abe Sapien Dark and Terrible and B.P.R.D. Hell on Earth, as much as I enjoy them, they’re on the rails. Every issue moves them closer to their destination, and an issue that doesn’t have that forward momentum feels a bit lesser for it. Whereas Hellboy and the B.P.R.D. can go to England with Hellboy and Bruttenholm on their own little series of investigations and that’s perfectly OK.

Plus Stenbeck and Mignola are a great team. I think I said that already. But it bears repeating. I hope to see another story with them working together very soon.