“2099 Alpha” #1 tries to be many things at once, and ends up failing to rise admirably on any of them. Part character reintroduction, part new take on a beloved universe, part a menu of services for the one-shots that will follow it, this issue is not a great start for this event. 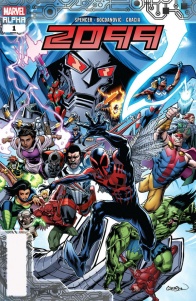 80 years ago, the Marvel Universe was born. 80 years from now, will it die?! THE FUTURE IS IN PERIL! Events of AMAZING SPIDERMAN have been leading to this for months. Something is happening in 2099 that spans Nueva York and beyond and will shake up the official Marvel Future forever. This is not a drill!

The 2099 Marvel Universe was launched in the early nineties, imagining how the world of beloved Marvel characters would be nearly a century from then. It was an imaginative take on super-heroes, taking the familiarity and established concepts as a base, and expanding upon that foundation with unique views and concepts. Now, in 2019, the publishing line is positioned squarely in the middle of its origin in 1939 (eighty years ago) and that future (eighty years from now), so the timing was poised for a relaunch of this future and imprint. Enter “2099 Alpha” #1 to make the proper introductions.

Starting with the positive first: Viktor Bogdanovic’s art was a perfect fit for this purpose. His linework has an eerie, offbeat style, that evokes some of that needed familiarity, but favor a more progressive approach. His very firm pencils and inks are sharp, reinforcing the notion of a futuristic, deeply scientific setting. The first thing readers will notice are Bogdanovic’s designs, both for surroundings and characters. What he does with Transverse City and Nueva York is truly beautiful to look at: as a combination of the neon filled, and yet noir, ‘Blade Runner,’ but with the more outlandish aspects expected of a Marvel comic, these cities are brimming with personality.

The same can be said of his characters. Without going into spoilers, there is a particularly well-known cosmic characters present on this tale, but the manner and role he is introduced is amazing to look at given the artist’s choice. It is one of those visual components that make a story or a series be recognized for. Also, as an alpha book for a series of one-shots, Bogdanovic has his hands full in presenting the new visuals from multiple characters. Some he leans very close to their original depiction (such as Spider-Man 2099, almost exactly the same as on his debut issues, decades ago), while for others he ventures far off into new territory (like Doom 2099).

Should go without saying that Marte Gracia’s colors are a joy to observe, especially on large, external settings, or on the more enclosed laboratory and office spaces. His palette is fully aligned with the drawings, enhancing the nocturnal shapes of these large megalopolis, to how artificial lighting has become in this far future. Gracias, as in his past works, helps make each character distinct, not only because of drawing designs, but given the specific color choices he imbues them with.

Despite the beautiful package, “2099 Alpha” #1 is not a compelling read given the hodge-podge manner Spencer’s script behaves. While there is something of a central point to the story in the shape of Doom 2099 and an accompanying figure, the plot jumps from character to character, without really making the readers connect to any of them. This looks more like a quick browse through a large cast, instead of a more meaningful examination of who they are, and what purpose they serve on this story.

It is not entirely up to the script’s fault. This type of issue usually suffers from the difficult juggling act of introducing a lot of concepts, but the specific problem with “2099 Alpha” #1 is that it shows enough to make readers confusing, but explains too little to cause it to make a lot of sense. For instance, Spencer assumes that readers have certain familiarity with the lore of the 2099 universe, and even some of his recent “Amazing Spider-Man” issues. On the other end of the equation, the script spends too much time on few characters, stealing the spotlight of some of the less-known properties of the 2099 universe.

At the end of the day, “2099 Alpha” #1 works as a rotating display of available characters, without actually placing them on the situations and settings that will provoke the event itself, that will actually move the plot forward. Only the most well-versed readers with the 2099 universe will make certain connections and be engaged with the storyline, and even they might find it difficult to determine where to read next on the multiple one-shots.

Final Verdict: 6.0 – While it is admirable to see the attempt to juggle such disparate plot threads and characters, “2099 Alpha” #1 is little more than a beautiful display of interesting characters and setting, without a proper drive to make it move forward.