I was on a minibus going to a hostel in central London about a month ago. On the right, as we drove I saw the shell of Grenfell Tower, wrapped up in white sheets with a green heart and an epitaph, ‘forever in our hearts’ across its top. This is the only time I’ve seen this thing that’s symbolic of a lot more than a fire. On 14th June 2017, a fire spread up Grenfell’s 24 storeys, killing 72 people, and destroying the home of many more. This was only a week after a general election that united and energised the British left, and, from afar, it felt symbolic of failings of a system of privatisation and budget cuts and ignoring social housing. But perhaps more important than that larger political picture is the lives of the residents, the trauma suffered, the community torn apart. “24 Panels” is an anthology of 24 stories, all no longer than 24 panels, of community, trauma, hope, and solidarity. It brings together creators from comics and beyond to support PTSD needs of Grenfell survivors. 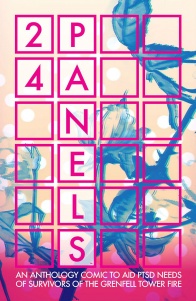 In June 2017, the Grenfell fire killed 72 people in a 24-story tower block in West London. 24 PANELS is an anthology comic to support the PTSD needs of the survivors. Curated by KIERON GILLEN (THE WICKED + THE DIVINE), it features 24 stories, each no longer than 24 panels. Half drawn from professional creators who volunteered their time and half drawn from open submissions, 24 PANELS is about community, hope, and (most of all) raising as much money as possible.

‘It’s still happening,’ the introduction, written by Gillen and illustrated by Sean Azzopardi with letters by Hassan Otsmane-Elhaou, boldly reminds us in full panel text – Darkseid is style. A year and a half on, the effects of the fire are viscerally still felt by the community. This anthology isn’t late, it’s perfectly timed, says the series of starkly rendered faces. This is about as direct an appeal to the Grenfell tragedy as there is in “24 Panels,” as the book’s main focus is on hopeful, community-driven stories.

“24 Panels” is an anthology that brings together disparate creators from mainstream comics, from independent comics, from outside comics. Names like Alex De Campi, Al Ewing, Laurie Penny, Alan Moore, Racheal Smith, Caspar Wijngaard, Ram V, Hassan Otsmane-Elhaou (who’s the most common name in the book, lettering 6 of the 24 stories, and the introduction), and a lot of others. As much as it’s a book, in content, about community, in itself  “24 Panels” is a large, community effort — bringing together writers, artists, cartoonists, and more to build something greater than they could on their own.

That being said there are a few more overt invocations, in Antony Johnston, Robin Hoelzemann, and Pippa Mather’s People First, the faces and names of the dead are depicted across three pages, giving humanity to an event that’s often seen symbolised by this inhuman, burnt rectangle of a building. Alan Moore, Melinda Gebbie and Otsmane-Elhaou’s comics poem, If Einstein’s Right, juxtaposes the ephemeral and fleeting nature of time and life, with direct and concrete references to lives lost, lying political blame with senior figures of the Conservative Party.

Both of those pieces are moving and serious, but a lot of “24 Panels” is lighter, and a bit fun. It is an incongruity that the anthology only just pulls off. The piece after People First, is called Dream Job: A Choose Your Own Story Comic!, in which cartoonist Lizz Lunney sends you darting around the double-page spread to different panels depending on your chosen responses to different panels. It’s funny and a little weird and definitely silly. I really liked Dream Job, but the first time I came to it, after spending a couple minutes quietly remembering, it took me a moment over that page turn to adjust my emotional setting. But that’s also a wonderful thing about this book; it can acknowledge the pain and trauma, while also bringing out moments of joy, combining aspects of life that do often come together.

The real high points of the anthology, though, are the pieces that sit in between that joy and pain, that aren’t silly like Dream Job, nor memorialising like People First. In Alex de Campi, Ro Stein, Ted Brandt, and Triona Tree Farrell’s story They Say, shows the layers of a community, as a young girl chasing her cat around the block of flats she lives in. Across two energetically rendered double-page spreads, we see the exterior of the flats, captioned with stereotypes of what ‘they say’ about the residents, but then we see the inside, see an interior life for the block and those live in its walls. A Little Hope by Dilraj Mann is a silent highlight, as a woman struggles through the ups and downs of a wilderness, until she can no longer pick herself up, and needs help from what’s in the space around her, a bird, to keep moving. Laurie Penny, Gavin Mitchell, and (again) Otsmane-Elhaou’s Human Child is a lovely tale where a magical creature occupies the life of a twin to a baby, building love and family connections, while demonic forces try to rip them apart.

An anthology responding to the demise of a tower block naturally leads to responses that deal with the physical space of buildings and locations as well as the communities within them more broadly. This includes things like They Say, mentioned above, but also The Favelas by Daniel Santos, Débora Santos, and Toben Raciot, taking us through the Favelas of Rio as a girl rushes to a ballet class, narration giving us a potted history of their spontaneous and tenacious growth, their name deriving from a wild flower, Faveleira. The gorgeous Silhouette Titans, written by Ram V, a writer whose preoccupation with place seems clear in much of his work, with Pablo Clark and Otsmane-Elhaou, discusses humanity’s architectural ascent towards the sky, from ancient Indian spires for royal decrees, up to urban sprawl, and eventual decay.

When I saw Grenfell last month, it became a quiet moment, the music I was listening to fading in my mind, the people around me on the bus weren’t there. For a minute things sat; it was me and this building that was once a community. Seeing the tower is emotive, but what is maybe more powerful is seeing communities stand together, push forward, and survive.