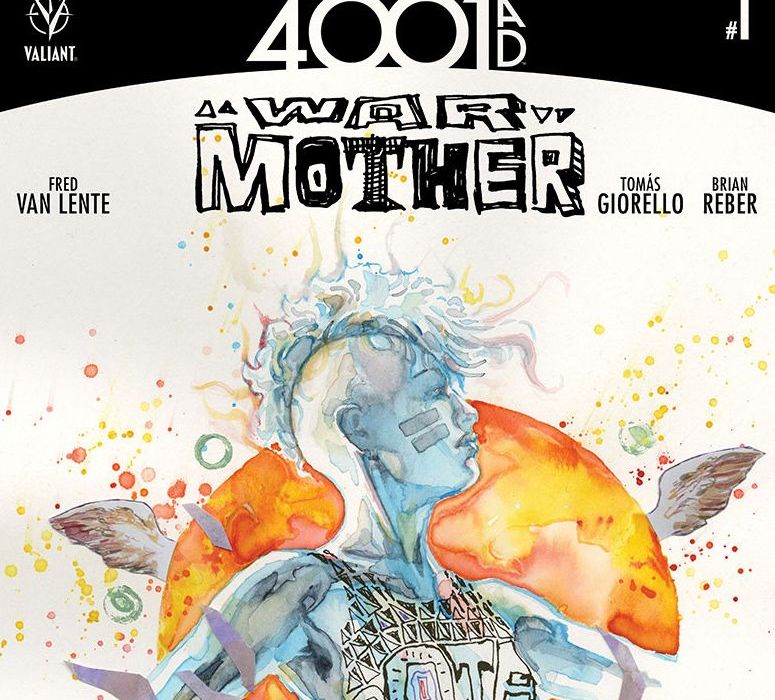 As the final battle commences on the falling New Japan, the effects are felt upon the Earth. How does one scavenger benefit from this? Let’s find out! 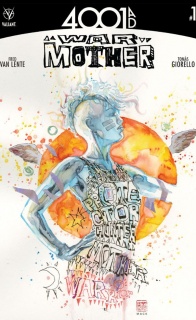 Witness the battle-scarred debut of Valiant’s top-secret new hero! As the war for 4001 A.D. rages, the coming of War Mother starts now in all-new standalone adventure torn from the pages of the summer’s biggest comics event! In the 41st century, much of the planet has been reduced to a barren wasteland. New Japan orbits the Earth as a floating oasis that towers over the ashes of the old world. The survivors of this desolate new age, robbed of the planet’s once-lush natural resources, must endure great hardships to survive. Amidst the devastation, one outpost of scientific knowledge has thrived by adhering to a strict code of isolation. But even the denizens of this walled city must venture out into the wasteland to gather supplies from the remnants of what was. This task is designated to one and one alone: War Mother. But all is not peaceful, even in New Japan. When the space-faring empire begins jettisoning city-sized sectors to Earth during the onset of a civil war, War Mother is called upon with a new mission: mega-salvage! Armed with a newly born sentient sniper rifle, War Mother is a one-woman army bent on sacking the crash-landed sector’s technology-laden debris for anything of value to her tribe. But, as calm turns to chaos, Sector 8146 will reveal a telling secret about Earth’s true order that will collide War Mother against her community, her code, and her calling?and bring destruction down upon one of humanity’s last surviving outposts of order. Out of the ashes of the summer’s most ambitious crossover event, New York Times best-selling writer Fred Van Lente (GENERATION ZERO) and spectacular rising star Tomas Giorello (Conan) introduce the Valiant Universe to the boldest new hero of this century or the next when War Mother makes her history-shattering debut!

So, as I have been discussing over the last couple issues, “4001 A.D.” as an event is getting a bit long in the tooth for me. Not a bad event (especially when compared to that other event from that other company), but I am starting to look forward to the end. So, thanks a lot, Fred Van Lente, Tomás Giorello and Brian Reber for re-igniting my interest in the 4001 side of the Valiant Universe, you jerks!

Okay, that’s only moderately true. This issue is without a doubt my favorite issue of the event, but I just have preference this by saying it shares a similar downside to “4001 A.D.: Shadowman #1”, it feels very pilot-like, and as such crams a lot within its pages. That being said, I really really dug this book!

This story surrounds a place known as The Grove, an isolated community in what was once South America that is near self-sufficient. “What we need, we grow! What we cannot grow, we gather!” is their motto and only one leaves the Grove. That’s Ana, queen of scavengers and the titular “War Mother” (“Scavenger Mother” not being anywhere near as good a title). Now, one can see a great deal of Max Max: Fury Road’s influence on this piece, to good effect. That being said, it’s a story about a scout/scavenger named Ana with a unique sniper rifle so I’m going to make the more topical Overwatch reference. Weird weird coincidence.

Speaking of unique sniper rifles, the biggest relationship explored in this issue is that between Ana and her sniper rifle. Yes, the sniper rifle has sentience, an artificial intelligence that serves as the analysis and targeting interface. It’s name is “Flaco” and, despite it’s snark, is kind of a newborn itself. It further drives home a theme of parenthood throughout this book, with Ana serving as not only the mother-figure to this intelligence, but being the chief scavenger for the Grove and the orphans she takes care of in her downtime. This is emphasised further when she is exploring one of the New Japan sectors that fell to Earth and finds a survivor, a child who was genetically designed for some couple in New Japan who has a real high opinion of himself until the reality of his situation settles in.

Tomás Giorello is an artist that I haven’t looked at in a long time (last time being when he drew “Earth-2 #0”, back when that series wasn’t the utter trashfire it would become) and I have really missed it. If I had a comparison, it’s painting-like visual (combined with Brian Reber’s great colors) honestly reminds me a deal of Esad Ribic, except a bit more sharp and jagged at times. The design work on the architecture and people of the Grove really does a great job of selling the fusion of organic, return to nature society along with the futuristic technology (some of the Grove leadership combining roots and moss with body armor). Giorello’s design of Ana herself is great too, combining sensibility and practicality with just a touch of flare. Just from a warmth in her smile that Giorello draws, you can tell that, while Ana is no-nonsense, she’s not a cold hearted uber-serious “Strong Female Protagonist”.

As I mentioned above, this issue does suffer in the same way as “Shadowman”’s tie-in in that it wants to do a lot in the page space it’s allotted. And while the first half with Ana leaving the Grove right up to finding the boy in the ruins flows real well, it’s the return back and the fight to allow the boy into the Grove (Ana being forbidden from bringing anything living back) that kind of suffers from pacing issue. A great deal of dialogue and panels gets crammed into those last few pages and even some of the artwork feels a bit cluttered. It isn’t as bad as “Shadowman”’s pacing though, where it felt like it wanted to be a four-issue arc condensed to one. Maybe if “War Mother” had about three or four pages to let that series of events breathe a bit more, it could have worked.

The other disappointment has nothing to do with any faults with this book, but further enhances how good it is: it ends with the words “The Beginning…” and, at time of writing, we have no knowledge of any further plans that Valiant may/may not have in regards to “War Mother”! I know that sounds like a cheap thing to complain about and it comes off as “fannish” and not “critic…ish?”, but I really had a load of fun with this. It makes me sad that this potentially can be all we have with this character for the foreseeable future.

Final Verdict: 8.7 – A really cool pilot for more stories with a fun protagonist.