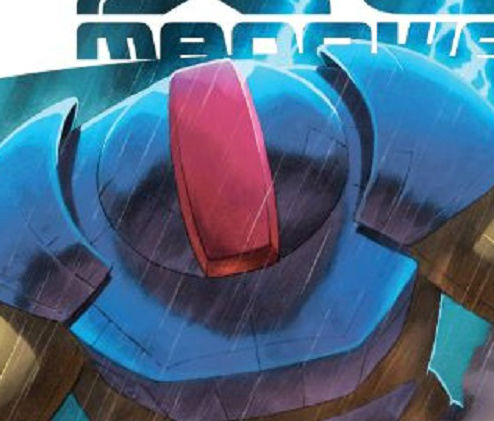 “4001 A.D.” is a comic event and what would a comic event be like without tie-ins (don’t answer that)? X-O Manowar is the first, hoping to add a bit to the history leading up to Father’s orbital supremacy. How does it play out? Let’s see… 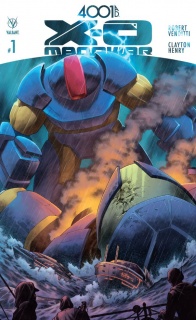 ROCKETING OUT OF THE PAGES OF 4001 A.D…the present and future of Valiant’s #1 hero come together for an essential standalone chapter at the heart of the summer’s blockbuster comics event! How did the rise of Earth’s most powerful hero lead to humanity’s ultimate destruction? Just what was the War of the X-O Manowars…and how did its catastrophic fallout bring ruination and despair to a besieged planet? And why is the sacred extraterrestrial armor called Shanhara the one weapon Father fears more than any other? The answers to the pivotal questions behind Valiant’s planet-shaking summer event arrive here as New York Times best-selling writer Robert Venditti (BOOK OF DEATH) and acclaimed artist Clayton Henry (IVAR, TIMEWALKER) blast two thousand years into the future of the Valiant Universe to reveal the never-before-told history of New Japan’s dominion over Earth…and the doomed role that the X-O Manowar armor was forever fated to play in the coming war for liberation!

Tie-ins to an event book can be good. That may go against pretty much all the rhetoric within comics journalism in regards to event books, but no less valid. They can help flesh out the backstory or mythology of the world it takes place in while still telling their own emotionally resonant story. Hell, one of my favorite comics, Kieron Gillen’s “Journey Into Mystery” started life as a tie-in. That series broke so many hearts and created so many laughs. It can be done and it can be done well.

This tie-in actually depicts an event in the history of New Japan. It is 100 years into the future (our future, not the 4001 future…. I hate sci-fi) and Father has launched the fledgling New Japan into orbit. Keep in mind that New Japan is the size of a nation and its launch causes major ecological damage to the world, not to mention the mass amount of fear knowing that there’s a giant A.I.-controlled satellite up there who could come down and squish you at any time. So, naturally, the nations of the world decide strike first. They manage to harvest a sliver of the X-O armor that belonged to Aric and use it to replicate it and develop these giant X-O mechs, one to nearly every major power on Earth Pacific Rim-style (or G-Gundam style, but that show was way more culturally insensitive). The result of this attempt is… well, let me put it to you this way: 2900 years later, New Japan is still up in the sky and a lot of the Earth is messed up.

Now, all that I just said may seem like there’s a lot to chew over here. The answer to that is… not really. It’s the big flaw in this tie-in. Sure, there is stuff happening, but it feels like I’m reading the events out of some futuristic textbook (albeit probably heavily edited because Father seems like the kind of dspot who’d do that) or, perhaps a bit more accurately, the Cliffsnotes of such an event. We have tidbits of some of these events shown to us, but it doesn’t show us the events, relying on third-person exposition to fill in gaps. Even when we do get to the main event, it just feels very emotionless. We don’t get to ever know any of the characters, they’re just there to move the story to a conclusion we all knew was coming. There’s the optimistic and charismatic X-O pilot. There’s the gruff military commander. The only character I felt a pang of emotional resonance was only because this character was introduced in “Armor Hunters” and their presence here was kind of baffling, if I am to be perfectly honest. It’s all just very basic, information is being given to us, but it’s just very surface detail.

Clayton Henry has been one of my more favorite Valiant artists if only for his very clean linework. While we do get that here, even the art feels a bit basic. The characters all look fine in that they are well-shaped and don’t look like noodle people. That being said, outside of maybe a couple of these X-O Mech designs, there really feels like there is little that stands out. It is fairly standard character design work for the archetypes these characters fill and even the paneling feels very standard. Colorist Brian Reber (w/ Andrew Dalhouse assisting) does provide a bright tone for the book and while I normally do appreciate that (books like “Archer & Armstrong” being a great example), it does feel a bit out of place considering the rampant destruction that is the ending of this issue.

With the incredibly accessible debut that was “4001 A.D. #1”, it is a bit of a shame that the first tie-in out of the gate was a bit of a flop. It isn’t a bad comic, it manages its purpose. But that’s all it does. It wants us to care about the people who are absolutely terrified of this computerized tyrant and his floating nation looking down on them like a god, but it carries little of the emotional connection one needs. Perhaps if this had been a three-issue mini to help us get to know the characters it could’ve worked, but it just fits that ever annoying spot of “average”. It sets out what the event requires of it and accomplishes that adequately enough, but it adds little to the history of an event that we already knew the result the moment we read the first page.

Final Verdict: 5.2- A tie-in that communicates information but does little to elevate it.