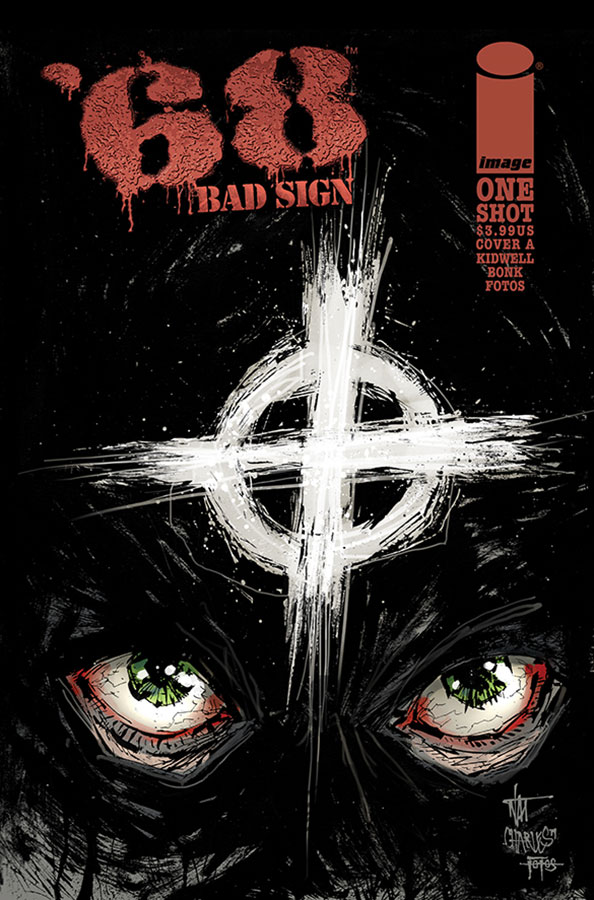 The Zodiac Killer is arguably one of the great modern-day boogeymen. With the years between the present day and his killings grow further and further in between, it would make sense for him to occupy the same place as other significant killers like Jack the Ripper in pop culture. And “’68: Bad Sign” attempts to do just that. With zombies.

We’ll uh… we’ll let you know how that goes in our review below. Spoilers ahead! 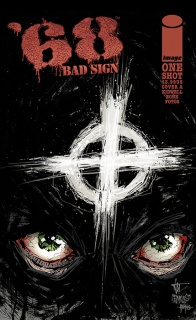 In December of 1968, a violent, random serial killer launched a spree of terror on the San Francisco area. On February 13th…the living dead rose and turned the entire world into a slaughterhouse. Now, hidden away in a derelict warehouse deep in the butchertown district, a human monster continues his bloody work, taunting the few remaining cops and hunting humans without fear in a city of the damned.

In the interest of fairness, I should state that “’68: Bad Sign” is my first experience with the “’68” series. The comic centers around a zombie breakout that occurs in 1968 (the year the classic Romero movie came out) and how that affects issues like the Vietnam war and the numerous protests occurring in America. On paper, it sounds like a cool idea; an exaggeration of America coming at the seams in such a tumultuous time that allows for the creators to explore certain issues about American culture and history. But if “Bad Sign” is any sign (ho ho ho), then the creators don’t seem to have much to say at all.

For one, “Bad Sign” can’t seem to tell if it’s a zombie story or a serial killer story. The two elements just kind of clash together into a confusing mess. In the midst of the world falling apart due to zombies, The Zodiac Killer is still on the loose and chopping up the Bay Area. And what could lead to an interesting compare and contrast between human and non-human monsters leads to some of the worst horror tropes, if not general tropes, wrapped up into one comic. The Zodiac Killer isn’t the tactful murderer that got away from ever being recorded. He’s a crazy transexual who wears leather and screams about his mother while carrying his sisters’ embryos in a jar. You know. As one does. This may sound redundant for a comic that has zombies and the literal Zodiac Killer, but it’s all too much. It’s like I’m supposed to be shocked about all the violence going on but I’ just confused. There’s no context for anything. Just dead babies and mutilated priests for twenty pages until the cops throw the killer out a window.

Speaking of too much: these fucking cops, man. There’s three main ones: Chief, Mustache Hero, and Woman. The Chief lost his daughter dammit and has been keeping this city together dammit. Neither of those ideas are really explored, but they do establish that we’re dealing with some tough officers, dammit. Mustache Hero is exactly what he sounds like and Woman set progress for female characters in comic books back by 47 years. Not only is she not an actual cop – she’s a meter maid who was hired because the zombies ate all the men cops – her first appearance is getting dressed after the chief calmly interrupted Mustache Hero having sex with her in his office to talk about this case, dammit. Or as she says in a panel with an appropriately gratuitous ass shot, “Sex isn’t the only thing left to look forward to, Captain. Or hadn’t you heard… It’s the end of the world.”

Somewhere out there, Robert Rodriguez just involuntarily pissed himself.

If “Bad Sign”‘s goal is to be an off the wall grindhouse film, then it succeeds to some extent. The art is incredibly gruesome, with real detail bestowed upon things like necks being torn away at or face’s ripped wide open. There’s some cool design played in with the reader looking through the Zodiac Killer’s binoculars, but most of the art’s focus is on grossing the reader out. If you’re into that type of story, then good on you. I’m normally down for some ultra violence as well but without any real context grafted onto the horror then what’s the point? The idea of a serial killer working among a zombie apocalypse is intriguing but there’s no real thought as to how that story would work. It’s like the comic went from initial premise straight to print, with little thought in between. And while it is hard to create an entire world within a one-shot issue, surely some of the needless violence could have been replaced with some sort of world building. At least some reason to care about Mustache hero. Hell, even just an explanation on why the SFPD are worried about the Zodiac when there’s a zombie apocalypse raging on would be nice.

Final Verdict: 4.2 – “’68: Bad Sign” has a solid premise on its hands but does nothing to back said premise up. The 20th century’s most controversial year and most controversial killer are smashed together to make a mess that is so close to telling an interesting story but is more concerned with crying fetus corpses and mustaches. That may not be emblematic of “’68” as a whole, but “Bad Sign” makes a case for the whole series to be approached cautiously.