As A-Force’s first, unofficial mission builds to a crescendo, we take a look at how the groundbreaking new team are shaping up. 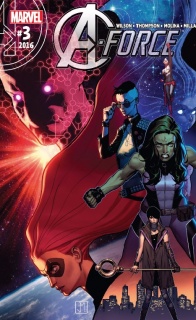 As Antimatter grows increasingly dangerous, SHE-HULK, CAPTAIN MARVEL, MEDUSA, DAZZLER and NICO MINORU must put aside their differences and learn to become a real team – the team Singularity knows they can be – before it’s too late.

Three issues into a rather action-packed run, I’m still not exactly sure how I feel about post-Secret Wars “A-Force”. The first issue set us up with a heroine, a villain of sorts, and a situation that threatens the world enough to start pulling some of our favourite female heroes into the orbit of the crisis. It was a very neatly handled affair that flowed logically into the second issue that saw the team expand and develop an ad-hoc base of operations while they scrambled to find a way to defeat the newly discovered Big Bad. This latest issue steps the pressure up a little more, and as our not-quite-yet-a-team team botches an attempt to tackle their latest shared foe goes way south, our heroine realises that, to stop the world from plunging into darkness, she’s going to have to face her fears and stand up against her enemy alone.

Wilson and Thompson’s script is every bit as light and playful as you’d expect, even as Singularity and her rag-tag bunch of heroines find themselves in space, facing off against their own personal version of Galactus, there’s room for levity that helps buoy the weightier elements of the story along without dragging you down. This issue, like the two that preceded it, is heavily based on action, but given that this is a team made up of a lot of heavy hitters, both in terms of superpowers and star power, there’s not really any weight behind the violence in this book.

The most interesting part of this issue, bar the ending, is a short interlude on S.W.O.R.D. base that shows the team debating a final attack on Antimatter. We get to see glimpses of personality in these moments of downtime, She-Hulk’s natural leadership and negotiation skills, Medusa’s haughty regal nature (slightly overdone at times, but still) and Dazzler going for broke as the rebel of the group. These roles still feel slightly uncertain, and at times a little clichéd, but they offer a sense of the positions that characters may adopt once the team becomes more formalised.

Molina’s sharp, clean line-work really makes this book look like one of Marvel’s flagpole cape-and-tights titles. He’s got a great eye for telling a story through action, and manages to keep each set-piece feeling fresh and engaging. He’s backed in this endeavour by Milla’s stellar (in every sense of the word) colour. Milla manages to render several different versions of space throughout this issue, as well as keeping control of the constantly swirling constellations within Singularity and Anti-Matter in a way that makes this book seriously pop.

There’s a lot going on in this book to like, but I purposefully kept my round-up of the happenings vague in the opening paragraph to shed light on my chief concern with the series: The story plays out, more or less, like any number of super-books that have come before it.

The A-Force that Singularity remembers (from the Secret Wars run) were a group of heroes guarding Arcadia, one of the more peaceful areas of Doom’s Battleworld that She-Hulk had managed to carve out for herself. In this new incarnation they play out like a lot of the other ensemble books on the Marvel roster right now, a self-style non-team of individuals with no clear links to one another, pulled together to fight a larger enemy. Essentially, echoing the most informal versions of an Avengers team.

So many Marvel books at the moment seem to be opening with a variation on this form, most notably “All-New, All-Different Avengers” which follows a very similar route in its first issue, and it gives the overall feeling of a lack of personality to the group books that has left me feeling a little cold on a fair few titles. Specifically with “A-Force”, it surprises me that Wilson has let the book run on for three issues without really examining any of the relationships between the women in this team. Are any of them firm friends? Bitter rivals? Enemies by circumstance? It’s as though every major player in the ANAD universe has managed to read a wikipedia rundown of the rest of the world’s heroes but has no strong feeling about anyone either way.

Wilson’s work on “Ms. Marvel” was categorised by completely the opposite technique, a focus on relationships, friendships, and growing up that found itself mirrored in the trials and choices Kamala had to make as Ms. Marvel, instead of being overshadowed by them. While I’m not suggesting that all female-helmed books need to be centre around emotions and relationship drama, It feels as though the heavy focus on stopping impending doom is something that is being worked through in numerous other books at the moment, including ones starring Medusa, She-Hulk, and Captain Marvel.

A book starring some of Marvel’s best loved, longest running female characters, and introducing us to a few from the new generation of interesting women in comics could be doing more to actually explore those women in all their unique intricacies, rather than just offering up a relatively generic script about a potential world ending crisis with some infighting and another forgettable villain. While there are few writers I can imagine I’d choose above Wilson and Thompson to put together a female fronted alternative book with mainstream appeal, it feels as though they’re being channelled towards writing a gender-swapped “Avengers” title, and rather than finding a new and exciting avenue to tell their own story, they’re struggling to make their way down a path already clogged with similar narratives.

Final Verdict: 6.2 – As far as popcorn comic stories go, it’s solid enough, but it’s too safe and straight-forward to get truly excited about.