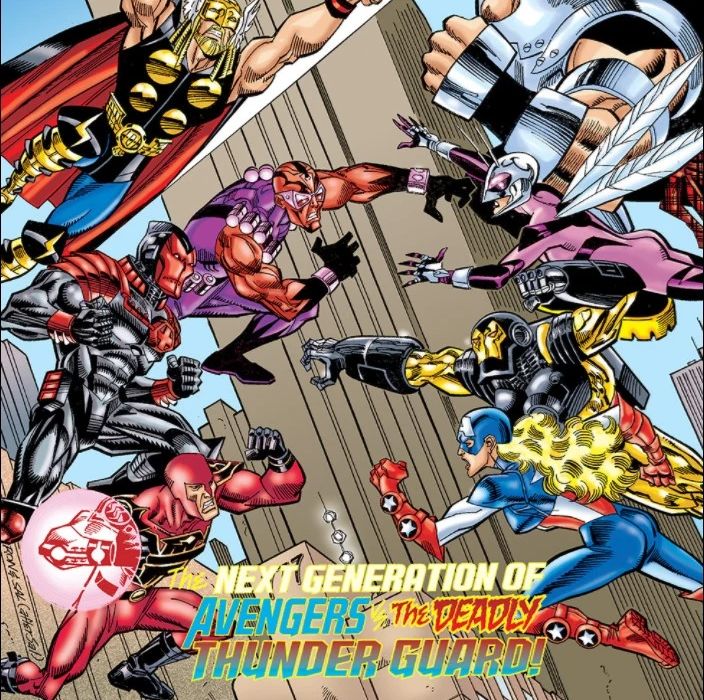 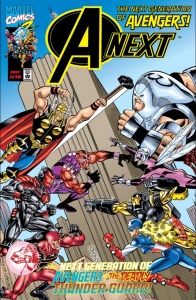 This is it, folks! Our brave new heroes have ventured into the portal and into “Ragnarok”! And boy howdy does this issue go to great lengths to start tidying up every loose plot thread established in the last few issues. First things first, we pick up right where we left off with Jarvis bidding a remorseful farewell to our team as they enter the portal that the old Avengers tried so hard to keep sealed. It’s at this moment that we finally see what happened to the Scarlet Witch: she’s still asleep, I guess? The moment is so briefly touched on that it feels like such diffusion of what was a huge last page stinger two issues ago. We do, however, meet Tony Stark who’s suitably shocked that Jarvis let the Avengers walk into the exact same trap that scarred the old team so heavily so many years ago. Frenz and Milgrom use some great shadowing and silhouettes here to convey how moody and sad this moment is, whilst also giving Tony a killer turtleneck/jacket combo (a candy purple colored turtleneck, thanks Bob Sharen).

Meanwhile, the Avengers find themselves in an alternate dimension, which we know because J2 exclaims “So THIS is what an alternate reality looks like! COOOOOOOL! Can we go home now?”. Frenz and Milgrom go ham on the splash page introducing this world, populating it with massive skyscrapers and vistas. Jim Novak also gets a chance to shine here too, detailing so so many billboards and advertisements with little indications of what this world might be like, with some standouts being the “Obedience/Diligence/Vigilance” and “DOOMSDAY IS COMING” posters. The heroes are initially treated with fear and reverence by the population since the superheroes in this world are a fascistic police force. However, they notice American Dream’s costume as a sign of resistance, starting a fight that causes the actual capital R Resistance to find them and spirit them away to the hideout, where they find a grizzled, eye-patched Jarvis! The mood here, whilst dour, doesn’t feel like a force that the Avengers have never fought before, as previous issues have hyped up so much, but DeFalco still has two issues of this series to go so something could be waiting in the wings.

In between a lot of these scenes, DeFalco starts to fill readers in on a few of the other mysteries that have been going on. Back in the home dimension, Jarvis is attempting to defend his choice to Tony, mentioning how capable the new team is. This feels like a good progression of Jarvis’ arc, since he’s already been in the depths of depression in a very similar situation, and is now trying to stay optimistic. It feels like Jarvis has evolved from a cranky grandpa figure to someone more than willing to pass the torch on to the new generation. Meanwhile, the two are interrupted by a blind Hawkeye (he always seems to lose his sight in these alternate futures!). This suave figure reveals himself as the person that trained the second wave of A2, the American Dreams and Freebooters, and whatnot. It’s a lukewarm reveal compared to the next, in which we find out the person who sent Ion Man to kill Cassie was none other than Hope Pym! She actually reveals the motivation behind this, that she blames the old team for her father’s death and thinks that the new team is “making a mockery” of his death by re-opening the portal. Which, honestly, I do not blame her for! Each reveal works well as it makes the book come full circle, having the past directly come to terms with the future moving in a different direction.

Back in the bad Earth, we find out that Captain America never died on the original mission, he stayed with the Resistance in this reality to help their cause. Additionally, big blue reveals that this Earth had the Red Skull assassinate Hitler back in WWII, drastically changing the future to a point that Victor Von Doom eventually took control with a “universal cube”. Frenz and Milgrom are having a hoot in these cut scenes, with Milgrom’s inks echoing peak bronze age Jack Kirby in how the Red Skull is drawn, looking rough-hewn from a rock. The Resistance is interrupted by this earth’s fascistic super-police, the Thunder Guard, which is comprised of twisted versions of the heroes we know and love. Most of these are pretty run-of-the-mill, with the exception of this Earth’s Scott Lang, Pincer. He’s revealed to have mutated himself to become more like an ant and killed his version of Cassie because she wouldn’t swear allegiance to Doom. Cleverly, his costume also echoes the Frenz/Milgrom design of the good Earth, with Sharen providing the same red/purple palette, just with more of a skinhead aesthetic over classic tokusatsu.

The battle rages on for a while, with the reveal that Kevin’s father, Eric Masterson, exists as an evil Thor/Thunderstrike in this reality, which appropriately shocks our dear sweet boy to his core. Frenz and Milgrom go for high drama at this moment, contorting Kevin’s face to the extreme, whilst Novak stretches his lettering speech to different sizes to show the wavering, emotional pitch. Eventually, the team retreats to a safe spot, realizing how outmatched they are. Captain America goes into all square-mode and delivers a speech about how the team shouldn’t be here and should go home since not even the original Avengers could stop this threat! It’s a pitch-perfect Cap speech for this time period, but our A-Next team is having none of it! Captain America doesn’t know that they already cleaned their own house last issue! Now it’s time for them to aid him! It’s a short, fun rebellious moment that keeps the ball rolling for the next issue, making this final arc feel appropriately momentous. 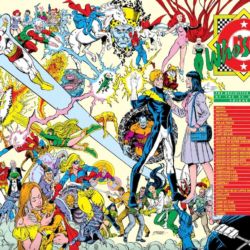 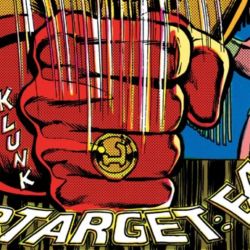 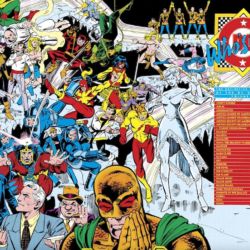