A futuristic comic from inception to execution. Colinet and Charretier bring their triumphantly unique project to the U.S. 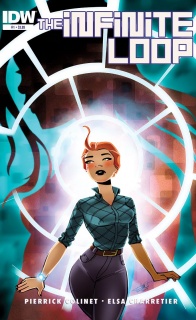 Tearing along the open road in an authentic muscle car might just be one of the most visual representations of ‘Freedom’ that I can imagine. But, although the first few pages of “The Infinite Loop” might feel like a throwback to 70’s era American cinema, French creative team Pierrick Colinet and Elsa Charretier found their freedom in a decidedly 21st century way.

After sending out some test pages to a few publishers, but feeling like they were treading water slightly, Colinet and Charretier headed to Kickstarter to offer their book directly to an audience. After smashing their initial target and releasing the first three issues in their native language, “The Infinite Loop” managed to get some recognition from IDW, who picked up the 6 issue series for mass release.

The premise for this opening issue is a relatively simple one. Teddy, our charismatic protagonist, is a field agent for a shadowy company whose job it is to police time-travel anomalies and ensure that history continues on the course it has been/will be forever. The mind-meltingly, time-traversing nature of her job has long since worn off on her and, as she chats casually to her office-bound co-pilot Ulysses,  Teddy comes across as seasoned and cynical in a way that feels relatable, rather than ungrateful. Issue one opens up with her in 1960’s Nevada, heading out to an anomaly that needs fixing, and the first half of the issue serve to set up both a standard day-in-the-life for our protagonist and lay the groundwork for what is clearly going to develop into a complex, emotional character. The issue continues onto a playful jaunt through multiple time-lines that allows Colinet and Charretier the chance to display their incredibly symbiotic creative process, and it closes on a cliffhanger that feels like a fresh re-working of a classic concept.

Colinet’s writing feels incredibly natural in English. This could be something to do with editor Sarah Gaydos’ input, but it seems far more likely that Colinet and Charretier – creatives who both say they’ve been heavily influenced by American cinema and comics – are just that good at offering work that resonates with an American audience. There’s some initial clunkiness to the first couple of pages of dialogue, but it’s entirely forgivable, especially given the heavy lifting they’ve set themselves up with in terms of time-travel rules. As displayed through pretty much every film that deals with the subject, time-travel can be a tricky business. But, rather than let himself get bogged down with the details, Colinet seems to have subscribed to the Bruce Willis in Looper school of time-travel, ‘Don’t think too much about it’.

Colinet’s writing is steeped in literary allusions, all of which are subtle enough to work as part of a unified narrative without pulling you out of the story at hand. Even the first ‘mission’ Teddy is sent on feels suspiciously like an homage to a certain popular Japanese/American film series. He’s clearly a man schooled in the art of cinema, and it seeps through in his tight pacing, conversational, dialogue-lead scripting, and the structure of the comic itself. While the story is, ostensibly, a tale of time-travelling anomalies, both Colinet and Charretier have stated that the concept behind the comic – one that will presumably unfold as the story continues – is to explore the difficulty of living a happy, healthy, same-sex relationship in a society that frowns upon that sort of thing.

There is a distinct feeling of cinematic sexual banter between the female Teddy and the Male Ulysses, but they come from a time in society where we have seemingly evolved beyond love and affection. It’s interesting to see this concept floated out there, with the more traditionalist Ulysses being chastised by Teddy for his atavistic animal impulses. While this initial issue is focussed more on scene and tonal setting for the series, Colinet has already begun to sow the seeds of a less than conventional relationship dynamic that should prove interesting as the series progresses.

But with all that said and done, this comic would never have gripped me like it did if it wasn’t for Charretier’s amazing artwork. initially her bold line work and slightly cartoonish character design was a bit disconcerting but, once I’d gotten used to it, I began to find the quirky, dynamic style incredibly endearing. She aides Colinet’s cinematic writing style with a multitude of Teddy’s on each page, allowing her to progress the story at a faster, more engaging rate than a lot of other books from far more established creative teams. There seems to have been a distinct focus on punchy, narrative-driven movement in this first issue, and it’s an interesting decision given that they’re working to a six-issue limit. That being said, there’s a section during the middle where Ulysses and Teddy are just eating at a burger bar, but Charretier’s framing and expressive faces manages to inject it with tension and emotion.

Charretier’s panelling does a lot for the frenetic pace of this issue, grabbing you from the first encounter with an anomaly (which, by the way, contains an interactive flow-chart that combines elements of Jurassic Park with Back to the Future) and keeping you on your toes till the final panel. She’s constantly experimenting with perspective, colour, washes, and achronal settings in a way that makes every page feel unique and yet still tied together. By the time you reach the last page it’s obvious that there has been no effort spared as far as inventiveness goes. Charretier pens a chase scene like few artists working at the moment, and her visual representation of the multilayered network of time is perfectly suited for this raucous, helter-skelter comic book.

Final Verdict – 7.7: A fresh, and fun-filled romp of a comic book that promises social and sexual consciousness as it progresses. How could you say no?