“A Walk through Hell” #1, the new book by Garth Ennis in collaboration with Goran Sudzuka, is another prime example of what the famous writer can do to surprise its audience. With an issue that is mostly setup and focus on lead characters, this is a ride that grabs readers early on and doesn’t let go until the very end — if even then. 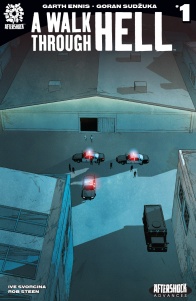 So these two FBI agents walk into a warehouse… Special Agents Shaw and McGregor handle the routine cases nowadays, which is just the way Shaw likes it. She’s pushing 40, a borderline burnout, the ghastly memories of her last investigation still clinging like shadows. McGregor is younger, more dedicated, hanging onto some measure of idealism whatever the world might throw at him. When two fellow agents go missing inside a Long Beach warehouse, Shaw and McGregor are sent to investigate. But what they find waiting is far from routine, as the local police have already discovered to their cost. Before the night is out, our heroes will encounter terror beyond their most appalling nightmares-in a place where the night may never end at all. A new kind of horror story for modern America, written by Garth Ennis (Preacher, The Boys, Crossed) and drawn by Goran Sudzuka (Y: The Last Man, Hellblazer)

There is something refreshing about approaching a new series to which there is more modest promotion and anticipation. The number of unknowns is bigger, the possible consequences on every turn of a page stronger. Ennis uses that to his advantage here, framing the story behind layers of reveals, so that the full picture of what is really happening can only be understood upon further examinations. At its most basic, “A Walk through Hell” tells the story of two bureau agents on the day leading up to a bizarre investigation with even more unexpected outcomes. And while this could seem like a generic paranormal suspense, the details and characterizations present make it much more than that.

Sudzuka’s art is fundamental to make this debut issue work. Taking a chance on pacing, this issue is almost deprived of action, save for some panels upfront and for a mostly off-camera situation at the end. Therefore, the focus on character moments, conversations and usually mundane setting takes center stage. That is precisely where Sudzuka’s ability to make believable characters (all with unique traits) and precise facial expressions come into play. There is a particular moment on the opening pages, where the utter desolation on a man’s face can be observed that sets the tone for the rest of the issue: the sense of hopelessness, of being unable to make a change in reality, even if one desperately needs to. As the issue progresses, that same skill translates into how each of the agents behave (with others and among themselves), so that no exposition is needed to convey what is going on the lead’s minds. An equal amount of attention is given to the general surrounding: note the background chaos on the opening pages, or even how the staff of the bureau goes about their daily lives on the building´s diner. This issue is filled with nuances like that, offering a very satisfying art package.

Svorcina colors are nothing extraordinary here, but they serve its purpose to add atmosphere to the detail-heavy line work. They efficiently change the tone at the beginning of the issue as the aforementioned event occurs (the before and after on those pages can be seen clearly on colors alone), as well as during its final moments, where the scenario shifts between the entrance to a warehouse and the interior of a van.

Where “A Walk through Hell” #1 really shines though is on the sharp script handed by Ennis. There is a lot to take in here. From the setup of the lead characters, each of them clearly with motivations and past experiences that will play out in future issues, to the political debate around violence, prejudice and fear around the world on today’s climate. While still debating current and polemic topics, the issue never feels preachy, often offering multiple sides and viewpoints to these discussions, which further adds to the overall characterization of the lead agents and the support cast around them.

In addition to the main plot, the issue weaves interesting events – largely focused on each of the agents – that will surely pan out as the series progresses. While it is still too early to say if those will be additive to the main story, rather than detractors from it, for the time being they contribute to the sense of a larger world, with situations that are as uncontrolled as the main story beats.

The situation that this issue builds up to can only be summarized as addictive. The final pages do such a great job on building up expectation, with slow reveals building to a crescendo, that readers will try to flip the proverbial last page a few times to see if there is more to the story after it wraps. This is an issue clearly designed around the serial nature of comic books, making it one of the exceptions on today’s publishing preferences where trade-waiting may be a big disservice. The anticipation of what is coming next is surely one of the high points of “A Walk through Hell…” and one that should leave readers trying to decipher what that title actually mean.

Final Verdict : 8.2 – Sharply written and drawn, “A Walk through Hell” #1 makes the best of the comic book serialized form, offering just enough of characters explicit backstories and problematic situations to keep readers invested, as they peel the layers of this detailed book for any hints on what may be going on. Well worth the time to revisit it multiple times.