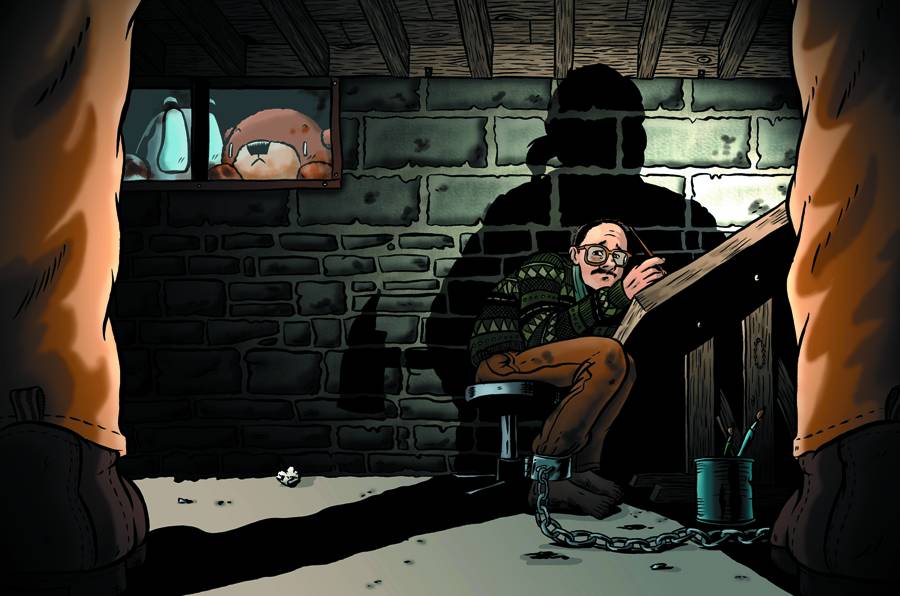 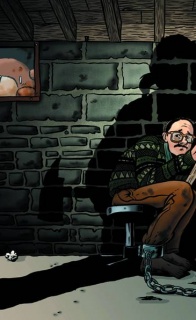 Written and Illustrated by Rick Worley

Rickets the broken robot and Prester the born again teddy bear finally discover the whereabouts of the elusive Bill Watterson; he’s spent decades as the prisoner of a deranged Jim Davis, forced to draw Garfield comics! Can our heroes rescue Watterson from the clutches of this commercial enterprise, or have they arrived too late?

A lot of “Waste of Time” can be off-putting and alienating.

In previous issues of the series, cartoonist Rick Worley blatantly admits this himself. He kicks off the story with his representational character, Rick the Rabbit, complaining to a monocled piggy bank named Capitalist Pig that his work hasn’t found an audience, though he toils away at it any chance he can get. Pretty much everyone around him points out his odd sense of humor, his obsession with twinks, his smug, bitter, and angry plot lines aren’t exactly the most immediately engaging things but Rick believes honest, expression in art ought to be rewarded and held in as high esteem as the more commercial fare. So much of “A Waste of Time” has dealt with the value and soul of art — the life of it, the commodity of it, and the spirit of it. As the story gets deeper and deeper in, as the jokes start flying in from all directions and get more wild and ridiculous, and as the questions become deeper and more personal, “A Waste of Time” becomes something more welcoming and relatable.

For “A Waste of Time” #3, published by Northwest Press, Worley splits the story into two different plot lines, both of which take on a different aspect of comics storytelling. The driving one is more like a journal comic, where Rick has a therapy session that allows him to reflect on how he became interested in being an artist. Worley delivers these fantasies about being part of these great groups and movements — the Beats, the Rat Pack, the Warhol crew — but has the memories of shopping for art supplies at Michaels. He reflects on a “lineage of artists”, wants to engage in an “active dialog with what comes before and after” in the “river of ideas from one generation to the next.” He remembers choosing to pursue comics because images were a driving force in any of his narrative tricks and the cost of expression with comics was far less than with film. It’s an empathetic position Worley takes here as he tries to figure out what made him so passionate about the medium in the first place.

The second story line deals with two of his characters — a born again teddy bear named Preston and a broken robot named Rickets — heading to Colorado to investigate the mysterious disappearance of “Calvin & Hobbes” creator, Bill Watterson. In the myth of “A Waste of Time,” Watterson was involved in a car crash some 15 years ago, then promptly disappeared forever, not turning in a single piece of work since that time. Now, Rickets and Preston are searching for Watterson because they want him to give Rick the Rabbit a sort of pep talk and advice on how to make it as a famous cartoonist. However, this is so Rick will have enough money that they can indulge in cocaine and Jesus Sticks until their hearts explode. These sequences are more immediately engaging and fun, and their relationships provides fodder for a great deal of jokes and gags.

Worley rhymes these two sequences well. Both of them deal with odd fantasies the characters face (Rick in the company of artistic movements; Preston and Rickets in kinky sex role-playing, among others). Both of them feature characters pining for something that may be ultimately detrimental to their well-being, but they don’t give a fuck regardless. Both of them move from instances of rolling-on-the-floor-laughing gags to heartbreaking moments.

If in earlier issues (or in the previous webcomic version of the story) Worley came off as pompous and arrogant, he manages to give his avatar far more empathy and affinity. I think a lot of this comes because the journal section is so earnest and honest. His thoughts, concerns, and fears about working in a creative and artistic medium definitely can be related to dealing with pretty much anything. His enthusiasm for Watterson and Rimbaud and Bob Dylan feels genuine, and I think that honesty and pure passion was something lacking from the Rick character previously.

His cartooning is also far more accomplished. His art is filled with heavy shadows, cross-hatching, and clever transitions. The beginning of the therapy section, in particular, is a well done and funny way to put the characters into their places. He keeps his page compositions to a newspaper strip-like grid, but generates a nice rhythm to help sell a lot of the jokes. His work with lighting, especially in a book with little instances of toning, definitely stands out.

“A Waste of Time” #3 is filled with a lot of big questions about art, and Worley doesn’t pretend to have any answers to them. He’s not afraid, however, of just having a lot of stupid fun with his characters, and his juggling these two different elements helps make the book an interesting and thought-provoking read. Worley’s willingness to be honest with us and to release his safety net of smugness give this book a deeper and more effective connection. You’ll want to keep coming back to see what Preston and Rickets are going to do once they find Bill Watterson, but you’ll be pondering about all these more existential questions dealing with art long after you’re done reading.