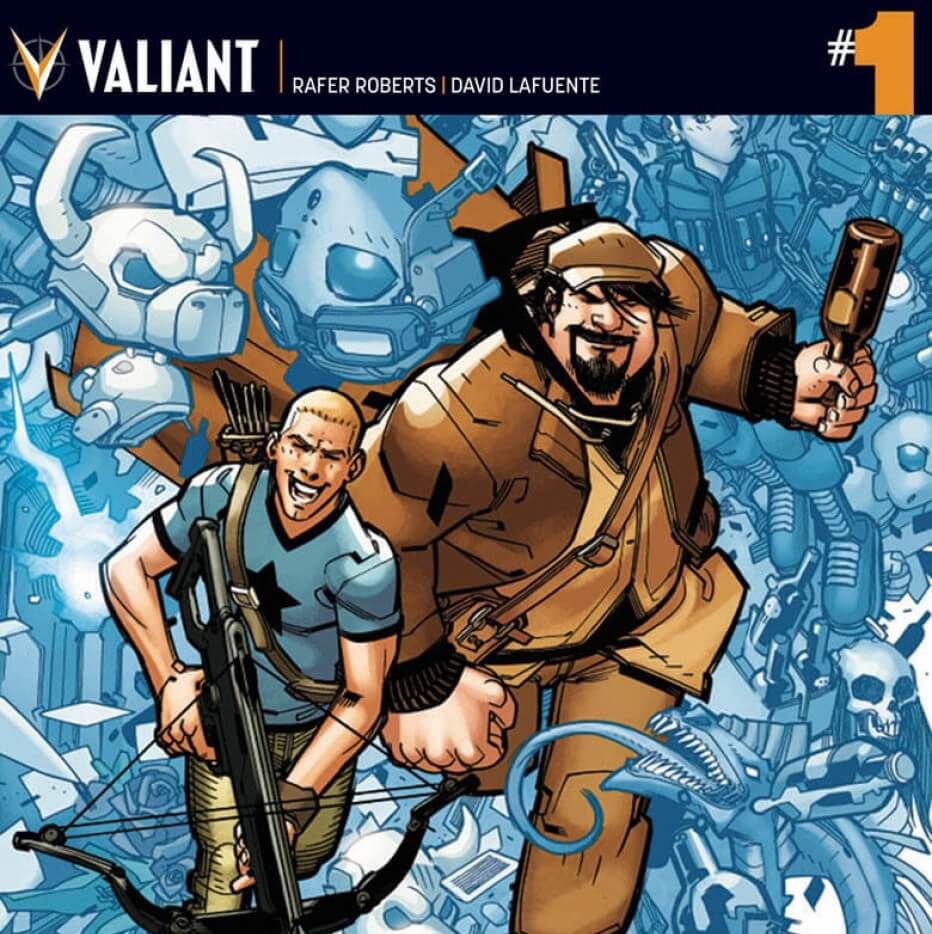 After about a year off, teenage genius Obidiah Archer and the immortal drunk known as Armstrong have gotten a new ongoing series. How does the start of their new adventure go? Let’s find out! 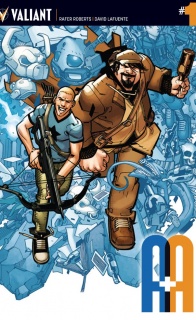 GET SMASHED…OR BE SMASHED! Valiant’s (somewhat) dynamic duo are going “IN THE BAG” for AN ALL-NEW ONGOING SERIES from rising star Rafer Roberts and comic book superstar David Lafuente!

Meet Armstrong: Since the ancient city of Ur, this immortal adventurer has spent the last 7,000 years drinking and carousing his way through history alongside some of the greatest merrymakers the world has ever known.

Meet Archer: A sheltered teenage martial arts master and expert marksman that was raised for a single purpose – to kill the devil incarnate. Little did he know that this undying evil was actually Armstrong (he’s actually a pretty good guy…once you get to know him) and, since hitting the road together, the two have become great friends and even better partners.

Now: Archer is about to set off on his most dangerous mission yet – a quest into the mystic reaches of Armstrong’s bottomless satchel to liberate his friend and comrade from the clutches of the mad god Bacchus! (Okay, so, Armstrong went into the satchel himself to get a bottle of whiskey that he kinda misplaced and got stuck. It’s like the Amazon warehouse of arcane treasures in there…and he doesn’t exactly have a maid service.)

Imprisoned in Armstrong’s satchel for centuries, Bacchus now commands a legion of monsters, goblins and golems bent on escaping back into the world of man and enacting revenge on their captor… Can Archer single-handedly combat the godly embodiment of intoxication himself – and rescue his best buddy – without becoming lost amongst Armstrong’s endless repository of bizarre artifacts and historical oddities in the process?

Here’s the story: When I first got into Valiant, my favorite book was Fred Van Lente’s “Archer & Armstrong”. The ending of “Harbinger” would eclipse it, but I still had an extreme soft spot for the action comedy. And I am happy to say that this volume seems to be off to a good start.

Like I said with Faith, there’s always a worry when new creators come onto characters that have been so synonymous with other creators. That said, Rafer Roberts does get the voices of Armstrong, Archer, & Archer’s step-sister Mary-Maria well for the most part (which I’ll get into). Archer’s naivete and good-heartedness are on full display here as is his impressive combat skills and memory. And Armstrong’s world weariness hidden by well-done humor and oafishness is as smile inducing and poignant as it has always been.

I would like to talk about the concept for the first arc, entitled “In The Bag”. Where Archer has to go find Armstrong, inside the satchel that Armstrong always carries. Seriously, it’s a TARDIS-sized world of insanity filled with odd creatures and people and it’s the kind of wackiness that fits so well into this side of the Valiant universe, one that is mystical without being pretentious.

Let me say that I. Love. David. Lafuente. From his cartoonwork in “Ultimate Comics: Spider-Man” to the several issues of “Batman Eternal” he did and now to this. There is a great deal of animation to his comic-work that brings such a fun and playful tone to the story. Every facial expression is well crafted to convey emotion (and inker Ryan Winn uses a firm line to help emphasize). He draws a very cute Archer. Don’t look at me like that! Archer uses his puppy dog face as a weapon to get Mary-Maria to help him and Lafuente and Wynn make it work real well! Helping Lafuente and Wynn is colorist Brian Reber. If you want a book that screams wacky and fun, his color palette hits that mark (unless he’s coloring “Imperium”, which is Valiant’s grimmest book). This along with “Faith” are the most vibrant looking books Valiant is putting out.

And here’s where I grumble that we still don’t have “The Ludocrats”! What?! I was shown a Gillen/Rossignol/Lafuente creator-owned book and it seems like it’s not coming!

The design work behind the world In The Bag is great. There’s elements of Escher paintings in there as well as bogs, liquor rooms (of course) and all sorts of other weirdness. This is personified in two new named characters: Davey the Mackerel and Bacchus. Davey the Mackerel is… well he’s exactly what you would expect, an anthropomorphized fish that wears a suit and hat and talks like The Thing a bit. And then there’s Bacchus. While it is up for question if he’s actually the Roman (actually Greek) God of wine and revelry, he does have some of the traits associated (such as goat horns, like the Satyrs closely associated with Bacchus). And he is the arch enemy of Armstrong… who doesn’t remember Bacchus in the slightest. I find a hilarity in that. It’s the “But For Me It Was Tuesday” trope and I’m not saying that just because I rewatched Street Fighter: The Movie recently.

There is one criticism I had for this book. Archer is…kinda violent in this. Okay, it’s an action comedy book, obviously there will be violence. What I’m saying is he was pretty prone to violence first, especially in one particular scene where he’s trying to get information on Armstrong’s whereabouts. It really left me unsettled and felt way out of character for Archer.

That aside, this is a very strong beginning and I’m looking forward to seeing where it goes.