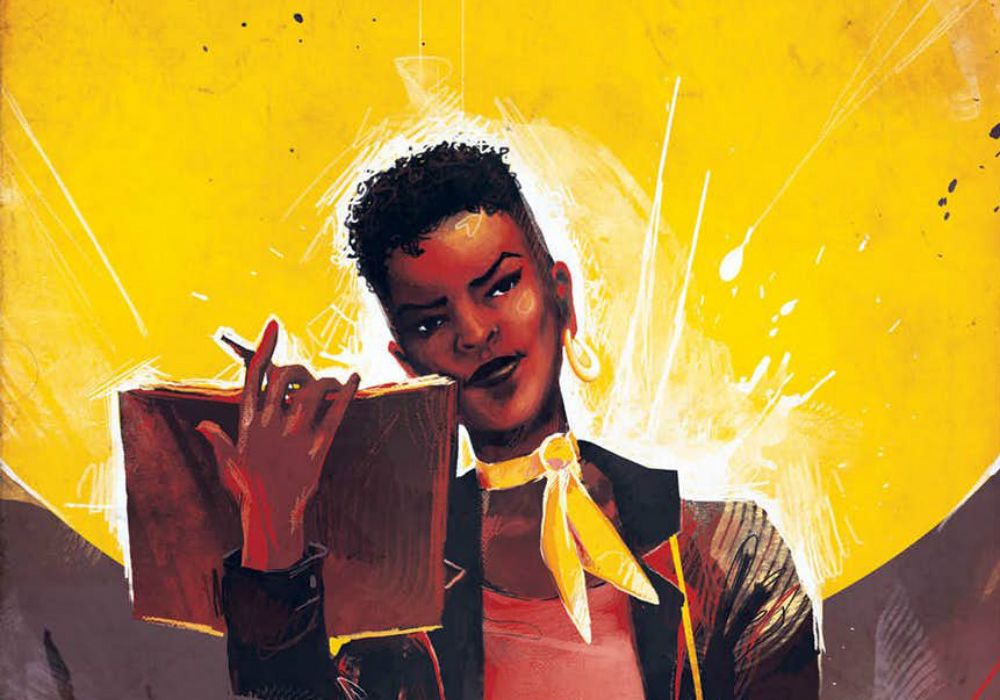 A city on the edge, racial tensions pushed beyond breaking point, and one journalist caught in an occult murder mystery. Read on for our review of our Pick of the Week: “Abbott” #1, which contains some spoilers. 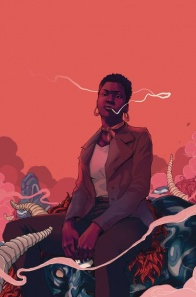 Hugo Award-nominated novelist Saladin Ahmed (Black Bolt) and artist Sami Kivelä (Beautiful Canvas) present one woman’s search for the truth that destroyed her family. Hard-nosed, chain-smoking tabloid reporter Elena Abbott investigates a series of grisly crimes that the police have ignored. Crimes she knows to be the work of dark occult forces. Forces that took her husband from her. Forces she has sworn to destroy.

There’s a dark atmosphere to “Abbott” #1, one that thickens every interaction and practically drips off the page. There are the occult elements that rear their mysterious heads throughout the narrative, but what’s more palpable and pervasive is the portrayal of racism and sexism that hits you like a heatwave: a dense fog of bigotry that surrounds the main protagonist Elena Abbott as she navigates a world that’s designed to work against her.

Saladin Ahmed has created such a deep and fascinating character in Elena. She feels completely out of her time but essentially of her time too; a hardened journalist that’s had to play the misogynistic game that goes on around her, in a world that prejudges her based on the color of her skin, and yet she persisted. Not only that, but she’s the best at what she does which, in this case, is investigating the murders of young black people in Detroit in the 1970s. It’s a thankless task that lands her in nothing but trouble, but there are darker elements at work that only she can see, driving her on.

Those darker forces are woven into the narrative in a way that feels natural, no easy task based on how unnatural they are. The mutilation of a police horse triggers dark memories for Elena, ones involving unknown occult forces that overwhelmed and killed her first husband. This part of her history, along with the oppressive white man’s world around her, has given her a hard edge, a no-nonsense attitude and an overdependence on routine and order in her life as, in her words, “it keeps the chaos at bay.”

What’s important about “Abbott,” and undoubtedly the driving factor behind Ahmed and Kivela’s work is that this is not a story traditionally given to a black female character. The tropes and story beats all feel like a period detective drama, one that could easily have been released in the era in which it’s set, but if that had been true, Elena Abbott would have been Alan Abbott: a cranky old white guy that’s seen it all. Representation matters, now more than ever, and “Abbott” is a book that the crime genre has been craving, not to mention comics in general.

The world of Detroit in 1972 wouldn’t feel as real were it not for Sami Kivela’s art. This book is a tour-de-force that manages to paint a rich world that’s bustling with life, while simultaneously making the underlying tensions and attitudes feel like actual tangible aspects of the art on the page. There are multiple pages throughout “Abbott” #1 that are filled with detailed establishing shots of Detroit that help to flesh out the city Elena inhabits, as well as the fashion that feels entirely on point for the time period. There are also unreal, genuinely scary moments of fantasy that, at this early stage of the story, are only creeping into the narrative, all of which is so effectively rendered by Kivela.

There are two occasions of gruesome gore, and a final page that leans into the more fantastical elements of the plot, all of which are graphic but necessary for the narrative. This is not a pretty world, in multiple ways, but these scenes are there to shock and drive home the point that yes, Elena’s world is frequently ugly, but this darkness that’s haunting her is a visceral, unreal madness that’s on another level.

Aiding Kivela in the creation of this world is colorist Jason Wordie, and he should be credited for a lot of the atmosphere felt in the book. The warmer hues of the city make the whole book feel claustrophobic in a very subconscious way, perhaps to emulate Elena’s situation, being surrounded by such racism. There’s also a conscious decision to paint the supporting characters in the muted colors of their surroundings, in contrast to Elena’s bolder palette. This not only serves to make our protagonist stand out from her peers but makes a statement about the attitudes of the characters: namely that Elena is “different,” and her attitudes stand out from the crowd, whereas the casual racism of those around her are a part of the background of her everyday life. This is all done with Wordie’s colors.

There are a couple of standout moments in Kivela and Wordie’s art. The first is the opening page of the book, which is a fantastically designed introduction to not only the book but the city of Detroit in 1972, with images like a bustling street and a store going out of business, all with a backdrop of important headlines that segway into Elena Abbott’s byline for the Detroit Daily. The other is later in the book, where a page is devoted to Elena’s memories of her husband, grey-toned scenes of happiness and horror, all framed by the flowing orange neckerchief that once belonged Samir but is now seen around Elena’s neck. Incidentally, on the following page, Wordie conveys her rising from her painful dream by using two different color palettes for two near-identical panels; the first drenched in red as she’s still surrounded by those memories, the next a colder blue-green to signify the reality that she’s returned to.

“Abbott” #1 is a brilliantly well-crafted debut issue, one that accurately and thoroughly conveys the time that Elena lives in, managing to craft a nuanced world filled with all the racism – both casual and explicit – and bigotry you’d expect. Despite such oppressive surroundings, Ahmed has created a bold new character in Elena Abbott, one that stands out from the background and is instantly engaging. The edge of dark, supernatural horror adds a fantastical twist to this rich and compelling world, and the issue is an exciting start to what could easily become one of the best series of the year.