Last issue, we got introduced to the world of Elena Abbott, her personal, professional, and societal problems as well as a series of strange, shadowy occurrences. It was a striking debut but the question remains: Does issue two keep the ball rolling or does it spend much of its time spinning its wheels? Beware, spoilers ahead. 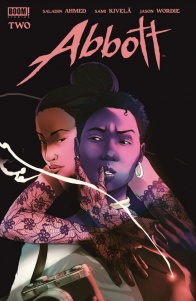 A brutal attack on the edges of the latest murder scene only spurs Abbott further into her investigation.

I ask this question not to belittle the stellar work on display in “Abbott,” and it truly is stellar, but to broach a bigger question about the pacing of the story and the placement of events within it. My big problem with this issue is that, narratively, we begin and end in pretty much the same place. Namely, Abbott on the ground after having been attacked by some shadow creature which she has basically no knowledge about. Moreover, while the specifics are different as she’s in a much worse state at the end of issue #2 than at the end of issue #1, this doesn’t change the feeling that issue #1’s cliffhanger, and by extension this one, was a cheap way to create tension without it leading to anything substantial.

Will this work better in trade? Probably. Most poor cliffhangers are resolved when read back to back with its resolution but it doesn’t absolve this issue of its mistakes. Similarly, we get a few rehashed scenes, such as the ones between Abbott and her boss as well as the one between her, Wardell, and Broadway. These, while well written and a good reminder of Abbott’s habits and her life outside the stories she’s writing, end up feeling repetitive for two reasons.,

One is they were just done better in issue one and the other is they don’t advance the supernatural plot, which has a spotlight on it after being the focal point of the bridge between issues. This seems to be the crux of the murders, is somehow related to her husband’s death, and is just a big, series long mystery but the best answers we get are a bunch of cryptic nonsense from an old acquaintance of Abbott’s.

While I’m not sold on the narrative presentation, that whole scene is the perfect balance of creepy and funny and shows how well Ahmed and Kivelä work together. Kivelä paints Sebastian as equal parts stoner, hippie-Constantine in one panel and in another, the dream lord himself, Morpheus. That panel is possibly one of my favorite of the entire issue. Sebastian’s face is bathed in shadows, his eyes black with just a tiny pinprick for a pupil, making him look almost otherworldly. His words are straightforward yet bathed in mystery and dripping with the terror of the dark. I’m certain that this visual comparison to Morpheus was not by accident.

Furthermore, the first page in this three page sequence is this hectic series of panels, captions, word balloons, and dense environments. Yet the eye is able to follow it with ease, going from the time stamp in the upper left corner, following the path of the captions to Abbot’s silhouette walking towards a ratty looking building in a grungy part of this grungy town.

In the next panel, our eyes begin with Abbott’s words and then our eyes are forced to the two tarot cards overlaid on top of bottom left of the panel, dragging us from the bong and book filled foyer to Sebastian’s hands, dealing out the highlighted cards. I could chronicle the rest of the page but you get the idea. Kivelä excels at these intricate yet easy flowing panel structures, making sure that every overlap has a purpose and that the whole of a page, including the gutters, feels intentional. The simple six panels near the start of the issue are indicative of Abbott’s recuperation and the clinical, sterility of a hospital.

This intentionality helps to alleviate some of the issues I highlighted earlier. Not fully, mind you, but that plus the sheer charm that Ahmed gives to the characters allows me to overlook a bit of the repetition. Additionally, we get enough new information about Abbott’s past through her discussions of/with Sebastian and Amelia Chee that I can’t in good faith say the narrative just stays in place the whole issue.

In fact, the comic takes great pleasure in not going anywhere fast to great effect. Abbott walking over towards Amelia Chee takes only half a page split across three large panels with three overlay panels but Kivelä’s panel layout and the positioning of Abbott stretches it out, making us feel every step. We also learn everything we need to know about Abbott’s actual feelings towards Amelia through the close-up panels. Despite her stoic appearance, she’s nervous and lights a cigarette to calm her nerves. She cares about how Amelia sees her, so she brushes off her shoulder and fixes her necktie. But she also dreads the meeting, so she delays and walks slowly over towards Amelia, so much so that Amelia comments on it. Yet Abbott doesn’t want Amelia to know she cares, so she puts on the stoic face once again.

All this from half a page and only one line of dialogue. That’s strong storytelling and one that cements the focus of the narrative – in Abbott’s troubled relationships with the people around her as opposed to a single-minded pursuit of a story and the supernatural elements that accompany it. It’s just a shame that the issue is bookended by this supernatural stuff, which is interesting and propels the overall plot but frames the story as revolving around her fight against the shadows. We haven’t gotten any progress towards that and, as I said earlier, without any progress, it feels unnecessary and distracting from the more interesting developments.

Still, as far as mysteries go, my curiosity is peaked and I eagerly await an answer or two next issue. I just hope we get one instead of another fake out.

Final Verdict: 7.1 – Unnecessary repetition and the wrong choice of opening and closing holds back an otherwise fantastic issue filled with exquisite paneling, fantastic character moments and an intriguing mystery. Hopefully the next one can recapture the magic of the first issue.