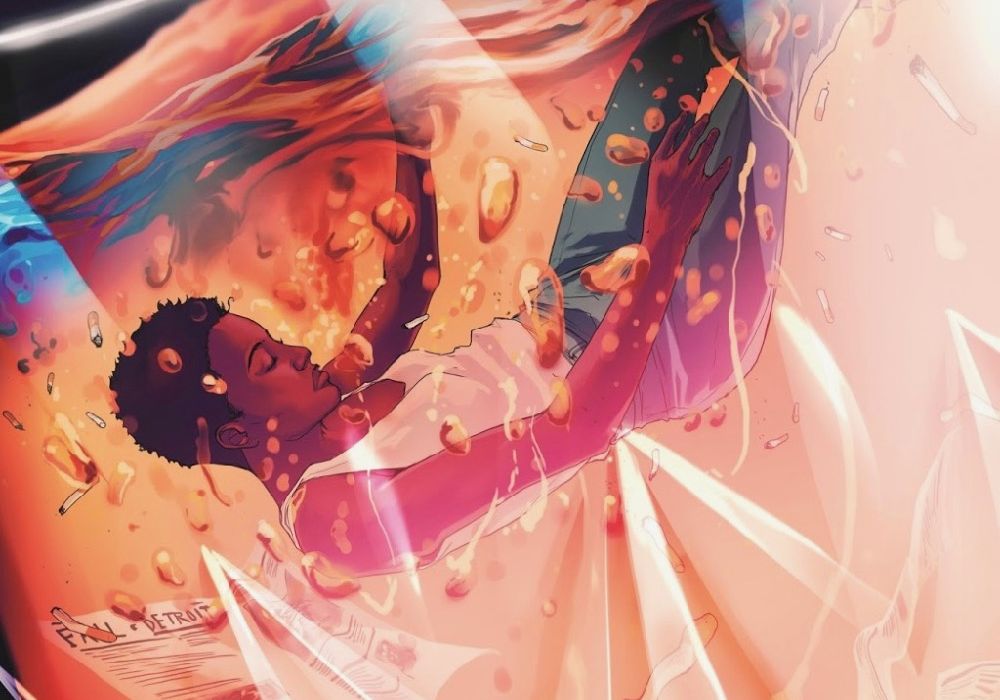 With an impeccably paced script, great illustrations, expert paneling and wonderful colors, not to mention one of the most captivating protagonists anywhere, “Abbott” #4 excels in every facet. 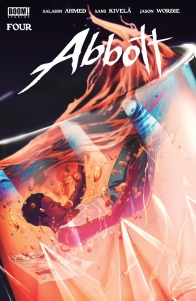 Abbott has hit rock bottom—no job, no friends, and no hope against the mysterious forces that continue to plague Detroit. But that doesn’t mean she’s giving up.

On the first page of “Abbott” #4, smoke snakes from the tip of Elena Abbott’s cigarette to create a lattice of panels. In the center column is an unadorned series of close-ups that starkly depict her current situation: a needle riding the grooves of John Coltrane’s “Blue Train” LP, an overflowing ashtray, Abbott’s hand on a bottle of booze, her termination notice crumpled on the floor. To the left and right of this column are the forces of good and evil that have come to define Abbott’s life. On one side is Coltrane himself, surrounded by musical notes, a wan smile on his face. On the other side is a misty fuschia montage of the otherworldly creatures that currently plague Detroit. On the bottom one-third of the page, subsumed by all of this, Abbott sits in a chair, beaten down but not defeated, grappling with her unwelcome fate.

“All right, then,” she finally says at the top of the following page, somewhat reluctantly concluding, “Time to get to work.”

The first two pages of “Abbott” #4 are a microcosm of the series: they’re efficient, they’re engrossing and they’re exceptionally well constructed. As with any great comic, each of the elements works in concert with the rest, but the alchemical interplay here is a wonder to behold. Central to it all is Ahmed’s amazing script and at the heart of that script is Elena Abbott, one of the most vivid, realistic, engaging and powerful comic book protagonists in recent memory.

Like the story itself, Abbott the character doesn’t often take a break from the action. Not that she has a choice. As a seasoned journalist in relentless pursuit of the truth, she’s fierce, she’s driven, she’s focused and she doesn’t have time for excuses. Too much depends on her unique ability to shed light on the real story, no matter how dark and how ugly or shrouded in mystery the underlying truth may be.

Thematically, as with the previous issues, Ahmed keeps race relations front and center, constantly reminding us of the bullshit micro- and macroaggressions that Elena Abbott endures on a daily basis as an African American woman working in a white man’s world. Yes, the story is set in 1970s Detroit, but the implication is clear: things haven’t changed all that much. Racism is not a dusty, historical notion. The clothes the characters wear may have a retro look and feel, but the racial dynamics Ahmed explores clearly persist to this day. In that sense, the story that unfolds on these pages is not mere metaphor. It’s a harsh, unsettling reminder that for many Americans even the most common, otherwise mundane interactions can be fraught with frustration, tension and fear. In the grand scheme of things, Abbott is a mere mortal battling preternatural forces she can’t quite understand. Simultaneously she must contend with the more banal, but no less corrosive, forces of prejudice and intolerance that she understands all too well.

“If you’re looking to bail out your boyfriend or your son or whatever, that desk is down the hall there,” a white desk sergeant reflexively tells her at the police station.

Not all monsters hail from otherworldly planes. Some monsters live among us and don’t even know that they’re monsters. They inflict darkness by degree.

Visually, this installment is close to perfect. From the paneling to the page layouts to character expressions and body language, the story flows seamlessly from one beat to the next. There is no wasted space, extraneous content or filler. Even the subtlest moment ultimately informs the story and moves the narrative forward. At the top of page three, for example, what first seems like a simple four-panel composition actually conveys four separate phone conversations, deftly communicating Abbott’s mindful transition from “two days of debilitating self-pity” to full-speed-ahead work mode, whether she’s officially on the case or not.

Illustrator Sami Kivela’s paneling is exceptional throughout the book. When Abbott meets with James, her ex-husband cop, inset panels are layered over police documents freshly pulled from a case file. When she is attacked by a mythical humanoid best from another dimension in the garden of a mysterious mansion, we see the scene from high above, told through continuous action punctuated by small cut-away scenes. Then, when Abbott’s life is truly on the line, Kivela unfurls a bold, brilliant splash page that thrusts us right in the heart of the action.

Jason Wordie’s colors have a similar rhythm, ebbing and flowing, rising and falling in conjunction with the action. As the book begins and Abbott is nearly overwhelmed with self-pity, her world is blue on blue, with other worldly shades of magenta, purple and fuschia seeping into frame. Later, as she pounds the pavement in search of clues and more information, warm tones tend to take over, with pale yellows and oranges offset by delicate blues and occasional greens. Finally, in the book’s climactic cliffhanger scene, wispy supernatural magentas assert themselves once more, entangling the characters and refusing to let them go.

Final Verdict: 9.4 – Like its predecessors, “Abbott” #4 succeeds by balancing provocative contemporary thematic elements with brilliant artwork, a tightly written script and one of the most memorable, artfully constructed main characters in any medium. This series started strong, but each issue continues to raise the bar. Whether or not we deserve her, Abbott is the hero we need to help us make sense of life in America in 2018.