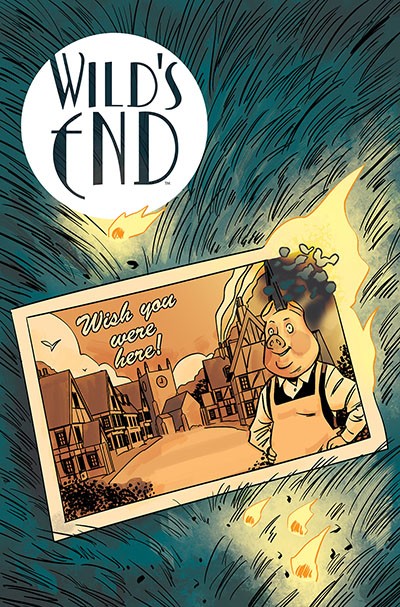 “Wild’s End” – the miniseries that introduced us to a cast of charming woodland creatures, then barbecued them before our eyes. Led by the mysterious Clive, this jolly but ill-prepared village faces a growing alien threat. 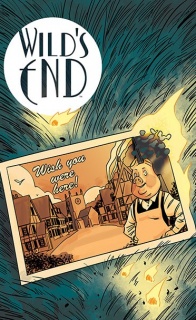 The search for the cause of a devastating fire that has left Crowchurch in mourning leads Clive and the others deep into the forest where they meet a new ally combating an alien threat at her door.

In terms of both visuals and dialogue, Clive is a difficult character to approach. His hidden eyes and drooping jowls make his face difficult to read – so far as dog faces go – and his short and infrequent comments leave plenty of room for interpretation. The villagers know he’s a military man, in any case; and as he simply, almost automatically, sets about marshaling their efforts, it becomes difficult not to like the guy despite, or maybe because of, his remoteness. It’s lucky we have such a solid anchor in this story; a house blazing and a beloved villager dead are only some of the dire facts facing Crowchurch.

As the story moves forward, a new character, novelist Susan Peardew, offers a neat counterpoint to Clive. A cranky, crusty feline wielding a shotgun, she’s altogether unwilling to be caught up by this series of events. Some obvious parallels are being drawn between the two characters, and while the pairing feels a bit heavy-handed, they do have a great moment inspired by a bottle of whiskey. And it is gratifying to come across another character as forthright as Clive – the villagers are pretty bumbling and panicky so far.

Visually, I.N.J. Culbard’s elegant style continues to get at the storybook sweetness of the villagers themselves – all the while managing to sneak in traces of fallibility, incompetence, and hypocrisy. The faces are particularly revealing when Gilbert (a rabbit) and Peter (a mink) dish the dirt on Ms. Peardew. To them, there’s nothing more fun than talking trash about an unsociable novelist, and their glee is legible in the few simple lines of their faces, Again, Clive’s relative impassivity – even as he asks after Peardew – puts him in a whole other category.

And so far as heartbreaking moments go, it doesn’t get much more wrenching than Alphred’s reaction when he finds his aunt is dead. His rash subsequent actions seem like the natural conclusion to that hefty dose of grief and shock and horror.

Sometimes the pages can look a little flat – owing, I think, to the lack of gradient in the colours. But the shades themselves are appealing enough – rich twilight blues and fiery yellows – that the overall simplicity doesn’t grate. Clive’s black military coat also cuts a neat silhouette, punctuating the prevailing colours and setting Clive apart all the more.

In terms of the actual robot-aliens attacking Crowchurch, well – these are as familiar as the woodland creatures and their home, if taken from different source materials. Their simple, mechanical, retro-futuristic design meshes well with the setting without looking like it out-and-out belongs to it, adding a welcome dash of H.G. Wells to the Edwardian countryside.

At the end of the issue, some supplementary materials by Nik Vincent afford us a glimpse into Susan Peardew’s daily life. And while these aren’t exactly relevant to the plot, this window into the frustrations of the reclusive author adds a nice touch of depth to our understanding to the character. That, and it’s pretty fun to read phrases like “unbearable embuggerance”.

Nobody’s determined the exact nature of the aliens ravaging Crowchurch; but as of this issue, the brutality of said menace has been made clear. The body count is rising – and while nobody wants to see a flamethrower turned on the world of The Wind in the Willows, there’s something compelling about the continuing horror of this premise. One would hope that the friendly villagers of any of your favourite children’s stories would be able to look out for themselves if they had to – and while their bumbling side is emphasized in “Wild’s End”, it’s clear they’re not going to take this lying down, either. What do anger and grief and vengeance look like in such a cozy world? Thanks to “Wild’s End”, it looks like we’re going to find out.