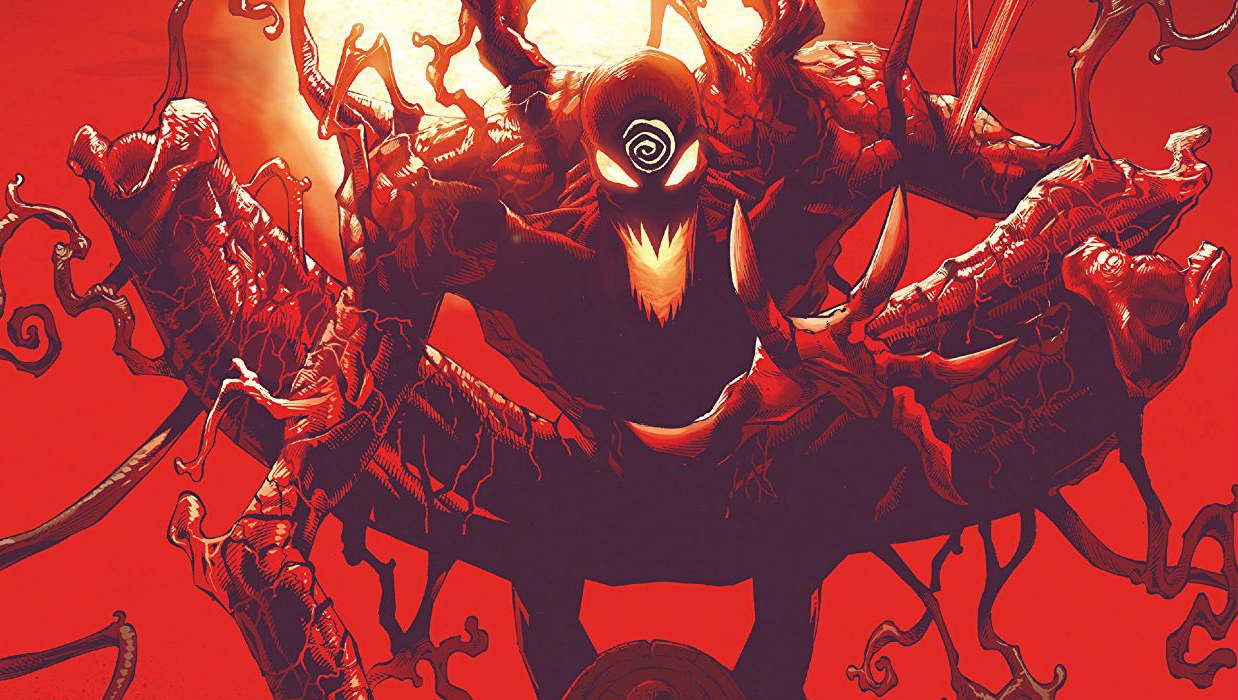 “Absolute Carnage” #1 isn’t a story about Carnage, probably because there isn’t much to Carnage other than ‘I want to kill everyone and everything’. It’s a story about Venom and Eddie Brock that could have been way too excessive and violent, but somehow manages to blend horror, gore, and existential dread into something deeply personal and scary. 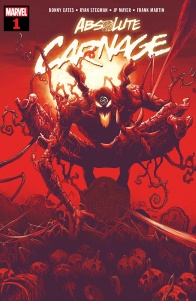 After turning Venom’s world upside down a year ago, DONNY CATES and RYAN STEGMAN are about to put the Sinister Symbiote through hell again, only this time CARNAGE has come calling, and everyone who’s ever worn a symbiote is dead in his sights! He’s skirted the periphery of the Marvel Universe for months, but Cletus Kasady at last stands poised to make his grand return to New York in a blistering 60-PAGE story… and he wants to paint the town red!.

It’s very clear that writer Donny Cates loves Venom as a character and takes an almost perverse joy in making Eddie Brock suffer. His previous work on the ‘Venom’ series helped flesh out the history and motivations of Venom as a character, along with distancing him from the main Spiderman mythos.

Cates gives Venom and Eddie Brock a new mythology to play with, something that was created and developed in his highly successful ‘Venom’ series. The symbiotes are part of something much larger and darker than Eddie Brock could have ever imagined. They started as the soldiers of a god named Knull, who hated everything ever created and sought to destroy the universe. While the symbiotes were once his loyal soldiers, they rose up and rebelled against him, trapping him in a prison of their own bodies and saving the universe from his rage.

Unfortunately, one of Venom’s offspring rather likes the idea of a god that wants to destroy everything and has made it his mission to resurrect Knull and bring him back to life. That offspring is one of the most violent and hateful characters in the Marvel Universe: the serial killer known as Cletus Kassidy…otherwise known as Carnage.

While Eddie Brock and the Venom symbiote must band together in order to stop Carnage from reconnecting with its god, it’s going to be a bit difficult because Brock and the symbiote aren’t exactly on speaking terms at the moment. It turns out that the symbiote hasn’t been completely honest with Brock. Not only has it been keeping its history and past hidden from Brock, it’s been withholding important memories and details about Brock’s personal life from him as well, including his biological son Dylan. Everything is presented clearly and efficiently and Cates does a great job of getting new readers up to speed on the new Venom mythos so that they can enjoy “Absolute Carnage” #1 as a standalone book.

Despite the new cosmic significance of the symbiote and all of the terrible implications it brings, Cates does manage to keep thing grounded and personal with Eddie Brock. Brock is presented as a man struggling to cope with his new place in a world with much bigger stakes and the added responsibility of looking after his newly discovered child. There is a very palpable fear and reluctance to Brock’s character, and he reads as a man who is failing to cope with the weight of the world on his shoulders. Naturally, he manages to find a sort of mentor/helper in Spiderman, a character who knows all there is to know about struggling with responsibility.

If there’s a problem with the comic, it’s how it’s packaged and presented to the reader. Marvel decided to publish this story in a massive, sixty page format that feels more like a small trade paper back than a monthly comic book. While it’s great that we get to read more all at once, it’s kind of jarring to see the book go from excessive violence and gore to classic Spiderman wit and sarcasm in the course of a couple of pages.

In all honesty, “Absolute Carnage” #1 would have probably been better if it had been published in smaller chunks and given space to breathe, but it’s still a good story with decent pacing and great characters.

The artwork is properly terrifying and it is the best part of the book. Penciller Ryan Stegman has a style that blends Western art proportions with over exaggerated anime poses and actions. None of the characters act subtle or constrained, and there’s a sense that they’re always either shouting, gasping in shock, or trying to figure out what’s going on. While this doesn’t exactly work for the few quiet moments in the story, it is perfect for when the book gets loud and goes completely off the rails. Venom and Carnage are not subtle characters, and when the book calls for violence and action Stegman delivers in an extreme, gory, and violent fashion. The book really captures the insanity of Carnage and Cletus and the leering faces and insane wild eyed look of the people driven insane by the presence of a creature that does nothing but inflict pain and misery on others.

Speaking of horror, the absolute highlight of the artwork are the symbiotes themselves. Stegman has a fantastic eye for detail and really brings the creepy and icky nature of the symbiotes to life. The symbiotes move like ferrofluid, not quite a liquid but not exactly solid either, and Stegman nails down the alien nature of the symbiotes perfectly. There’s a very real sense that, while the host and symbiote are bonded and must work together, they’re still their own characters and don’t exactly get along. This leads to some fantastic action in the panels where the symbiote doesn’t move as quickly as it probably should, which leads to some twisted and exaggerated poses that look great and feel twisted and alien.

While the pencils are fantastic, they are complimented by an equally amazing color scheme. It would have been so easy to make each of the pages unreadable with big, flashy colors but Frank Martin goes for a much more muted look that manages to accomplish a lot with very little. The book is dominated by a red and black color scheme with the occasional white and blue highlights which give the book a soft, hazy, and almost otherworldly feel. It does a great job of taking the chaos and fine detail of the line art and making everything clear and easy to understand.

“Absolute Carnage” #1 is a book created by a team who understand each other and are at the top of their storytelling game. On the surface, the reader is treated to magnificent artwork and one of the best visual portrayals of the symbiote ever seen. Dig a little deeper and there’s a heartbreaking story about a man watching his life spiral out of control as he has to deal with the pressures of caring for others while confronting a cosmic scale threat that is much bigger, and much more terrifying, than he could have ever dreamed.

Final Verdict: 8.5 – When something comes along that makes a character like Venom nervous, you should be very afraid…and look forward to some great art and a great story for one of Marvel’s most extreme characters.