While there are some truly interesting ideas on this issue and its connections to both ‘Event: Leviathan’ and ‘Year of the Villain,’ the atmospheric art and sharp dialogue can’t shake the feeling that not much is actually going on. 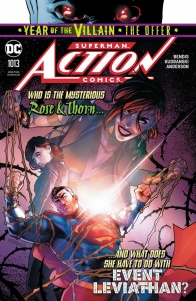 Metropolis is in total lockdown, and while everyone is busy dealing with the impossible threat of Leviathan’s complete takeover, a mysterious antihero called Thorn has decided to wreak havoc on the invisible empire! Witness the return of Rose and Thorn, the most dangerous woman in the DC Universe—and if you’ve never heard of her, it’s only because she is that good. All this, plus a major EVENT LEVIATHAN revelation! But why wasn’t it in the main series?

Plus, the invisible mafia held a death grip on the Metropolis underworld…until Lex Luthor visits their criminal competition!

“Action Comics” #1013 is a strange issue and perhaps an example of how multiple events can often impair the enjoyment of the individual series they intersect with. DC is currently going through not one, not too, but three large events, that of ‘Event: Leviathan,’ ‘Year of the Villain,’ and ‘City of Bane.’ And while the latter is mostly contained to the “Batman” series, the events of the other two jockey for attention on this entry. What is perhaps most jarring is that Bendis is the writer of both ‘Event: Leviathan’ and “Action Comics,” so the juggling act is made even more complex by the expectations readers will have in terms of cohesion to that storyline.

Starting with the positive first: Kudranski art on “Action Comics” #1013 is inspired. His sense of design is perceived on every page, thanks to very intelligence use of unusual panel design and viewpoint angles. The entire issue reads like a very personal and up-and-close adventure, with all main characters being examined closely, never allowing for a full panoramic view, increasing the sense of suspense.

Facial expressions are another highlight. Since so much time is spent on conversations and reactions to the situations around them, characters really come across as three-dimensional by their specific mannerisms and styles. One particular character, who goes through dramatic mood swings, allow for this to be showcased the strongest.

Colors by Anderson add to the entire atmosphere. Special note goes to his use on shades and smoke effects, where much of the depth and movement are conveyed by his range of colors. The combination of Kudransi’s style with Anderson’s palette really created a real world around the art.

Back to Bendis’s script, the main problem readers might face is the sense of quick-pacing disguising a far more empty package. There are several moments on “Action Comics” #1013 where characters, mainly Superman, are just moving around, changing set piece to set piece just to keep up with the main plot moments. It compounds to a general feeling that none of these moments, when looked individually, have any sense of gravitas, all of them being expendable or coming across as milestones that must be checked off.

The real shame is that, when the board pieces do settle down a bit, their exchanges are very good. There are moments of cleverly written situations around sharp dialogues on key characters, especially around Lex Luthor and potential allies, and with Superman on his endless quest to help others. Those moments are the true highlight of “Action Comics” #1013 and a testament of how well-versed on these characters Bendis quickly became.

In terms of the connection to ‘Event: Leviathan’ and ‘Year of the Villain,’ it is quite evident that the core DNA of “Action Comics” is much more aligned with Leviathan, with the elements connected to ‘Year of the Villain’ feeling a bit super-imposed. It is not as jarring as some of the recent issues published by DC (key example being “Batman” #75), but it is still perceptible enough to take the audience out of the pacing and experience. Hopefully those threads will pan out into the narrative this story has been playing since this run began, but at this juncture it does look a bit like a forced connection.

All in all, “Action Comics”#1013 feels like an intermission to the main story, in favor of the larger events occurring in the broader DC universe. Some of these elements could be interwoven better, given Bendis’s leadership and familiarity with ‘Event: Leviathan.’ The visual flair is surely strong, with a strong combination of drawings and colors supporting the overall atmosphere. Hopefully the next issues will pay-off some of the connections established on this issue and move the characters forward in a more meaningful way.

Final Verdict: 6.9 – Despite its very strong art and sharply written dialogue, “Action Comics” #1013 seems to be biting more than it can chew, never really spending time on any moment to make it exciting on its own.