During DC Rebirth’s earliest stages, “Action Comics” was always a polarizing title. The publisher set it up as if it was going to star Lex Luthor, but the book quickly shifted in focus to become the second Clark Kent ongoing in the DC Universe largely divorced from the “Superman” ongoing. In the wake of “Action Comics” struggling to find a voice or direction over the series’ publication, the latest installment puts DC hero Booster Gold back into the hands of his founder, Dan Jurgens. To make things more interesting, Jurgens is coming back to pencil the issue. Even with the quality of the book up in the air, the latest story in the series seems like a labor of love from the creator. 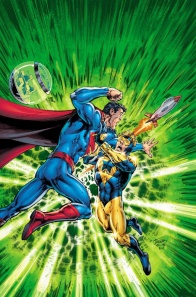 “BOOSTER SHOT” part one! As Superman struggles to cope with Mr. Oz’s true identity, the Man of Steel turns to the only “hero” he knows who can prove once and for all if Oz’s story is true: Booster Gold! But a massive power doesn’t want our heroes venturing through time, and will do anything it can to sabotage their journey!

The newest “Action Comics” storyline, ‘Booster Shot,’ does give the series the proverbial sense of adrenaline. The comic immediately starts off on the right note with Jurgens’s arresting Booster Gold pose taking front and center. The limited caption boxes and lost in thought Booster that starts the story off really adds the intrigue “Action Comics” has always needed. Jurgens even switches up the narrative of the series and gives Booster a sense of dread permeating from him not knowing just what is going on. Given the characters starring in the book, it is safe to assume there is a timestream leakage that needs to be fixed which does pander towards more familiar content starring the character.

This book does start to fall apart when trying to understand the plot. The motivation for Superman and the scenes with Lois feel out of place, disconnected, and out of character. The storyline sets up the issue with Clark Kent going back in time making the story murky, this sequence isn’t given the proper setup for Kent’s motivations and shows Gold and the rest of the characters stretching towards whatever resolution or conflict they need to start driving the plot. Given the context surrounding the issue, Booster Gold himself is the straight man in the comic, which is bizarre since the lead in the story is Superman.

There are still more cracks in the seams as the scene with Jon and Steven Lombard is one of the strangest single pages I have read in a comic this week. Whatever point Jurgens was trying to make with this scene, it was so tonally at odds with the other aspects of the comic: Lombard is the biggest Booster Gold fan and wants to show Jon his memorabilia but in a creepy way. The next few pages open up the incredibly dramatic and insane storyline regarding Lois’s estranged father. This plot point again feels both hugely convenient and purely insane. This is the part of the comic where the book turns into a sort of weird supernatural soap opera. As someone who rarely reads this title, these sequences might bother me more instead of holding a sense kitschy wonder that my heart cannot bear to resist, bubbling just beneath the surface of “Action Comics” there seems to be a sort of weirdness in the subtext.

Thankfully, Jurgens’s art is fairly solid if a little inconsistent as the installment progresses along. The superhero work kicking off the comic looks polished and vibrant. There are lots of multiversal references to larger DC continuity as Jurgens also draws with a certain level of vibrato. The tone of the work feels so dialed into Rebirth as a whole, baked into the core of vast DC Universe thanks to Jurgens’s timeless, rounded lines and expressive work and big muscles he lends to Superman. The real problem with the work comes towards the scenes on The Daily Planet, where the faces become really inconsistent in each panel. The page immediately following returns the quality and from there the artwork remains consistent until the conclusion.

That’s not to say “Action Comics” #993 gets everything wrong either. The scenes bringing Booster Gold and Superman together are engaging to read and getting to know why Superman is acting so weird should hopefully make for an interesting next couple of issues. Some of the larger implications the narrative teases are also fascinating. I would love to get a permanent status quo change-up for Superman for the big upcoming 1,000th issue. If anything were to change, “Action Comics” #993 feels like a good appetizer which may lead to something greater. As much as the story inspires goodwill from me personally, I do think the devil here is in the details.

Final Verdict: 6.8 – “Action Comics” #993 is crass and absurd but the nostalgic attitude and artwork make for an engaging read.