For what seems like the fifth time in the past five years, Vertigo Comics is revamping their line in the second half of 2018. One of the titles being launched is “Border Town,” a story set at the border of the United States and Mexico, but also at the border of our world and a mystical land of legends and monsters. The book doesn’t drop until September 5th, but we’ve got a spoiler-free advance review for you today. 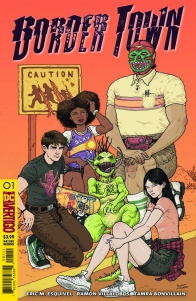 When a crack in the border between worlds releases an army of monsters from Mexican folklore, the residents of Devil’s Fork, AZ, blame the ensuing weirdness—the shared nightmares, the otherworldly radio transmissions, the mysterious goat mutilations—on “God-dang illegals.” With racial tensions supernaturally charged, it’s up to new kid in town Frank Dominguez and a motley crew of high school misfits to discover what’s really going on in this town torn between worlds.

“Border Town” is all about intersections, the spaces where things overlap. The book takes place at two geographic intersections, but also at the intersection of Frank’s, the main character, old life and new one, at the end of one age of public discourse and the start of another, and he, himself, is an intersection between Mexican and Irish heritage. The story is a soup of intention, anger, fear, and isolation, and it could easily be overwhelming.

The fact that it isn’t is a testament both to the writing of Eric M. Esquivel and the illustrations of Ramon Villalobos. Villalobos finds a balance between the average citizens of Devil’s Fork and the quite literal monsters that emerge throughout the story. His extremely detailed style adds some connectivity between the monsters and the high school kids, as he renders both meticulously. A few of these characters act as stereotypes – the white power derp, the wise old lady – but Villalobos is able to give them definition and distinction as easily as he is a chupacabra.

It is incredibly cliche to say that the setting is a character in a book, but Devil’s Fork is exactly that. Because of its proximity to the border, the town is a hotbed of people of who have left Mexico and those who want to stop more from coming in. There is tension everywhere, and no matter what Frank does, he ramps it up. He tries to be nice, and is accused of lying. He manages to get attention from two very disparate groups of people, and that angers both groups. The story, through Esquivel’s naturalistic dialogue, unfolds in such a way that, despite it beginning with a supernatural bent, it is always shocking when monsters show up.

Esquivel manages to get a ton of information across without making every scene an info dump. The exposition feels natural, and because of the circumstances set up for Frank – moving to a new town, starting at a new school, having to introduce yourself – you get a lot of it. Even the unnamed characters that pop up have clear agency and purpose; Esquivel populates the world quickly, without lazy storytelling technique.

The most amazing part of the book is that, despite the monsters, the racism, and the sadness, there is a ton of humor. There is a page of legitimate laugh out loud humor involving various monsters that are popping up in Devil’s Fork. Villalobos finds the perfect balance between things that are actually scary, and the things that people are afraid of due to their biases or backgrounds, and mixes them together expertly. Esquivel and Villalobos, in only their first issue together, do a magnificent job complementing each other, and craft a story that feels lived in.

Due to the mix of horror, humor, and Villalobos’s delightfully maniacal style, it can be easy to miss that, at the heart of this story, is a story about what it means to be an outsider. As his mom’s boyfriend points out early on, Frank is bitching and moaning when kids are literally dying trying to do what he is able to do with an attitude about it. But that doesn’t take away the anxiety of being new. He is auditioning, without knowing it, for various people he meets. To some, he looks too white; to others, he’s too Mexican. Frank is caught in the middle of a world that doesn’t want him on either side, and that’s legitimately scary.

Of course, when you add monsters to the mix, that fear becomes secondary to not, you know, having your head ripped off. But both anxieties are treated seriously, and that makes Frank’s situation feel even more dire. You can cut the tension in the book with a knife from the first page, and it never lets up. Despite that, the book never feels claustrophobic or unpleasant. The book puts you in Frank’s shoes for 22 pages and, while you may enjoy the experience, you’ll be glad to change back into your slippers at the end of it.

Final Verdict: 8.7 – A remarkable start to this new series and, hopefully, a sign of what is to come from Vertigo over the next few months.