When we recently chatted with Matt Kindt on The Hour Cosmic, his enthusiasm for creating a monthly comic was palpable. He wanted to reward the single issue readers with bonus content, including hidden clues, a letters page, and extra stories that won’t be collected in the eventual trades. While this is fine and good, unless the story itself (and the quality of the art) is one that will get people excited about coming to their local shops every month, it doesn’t matter how many extras are included.

Luckily for us, the art and story are pretty damn great. This is a spoiler-free review, so read on. 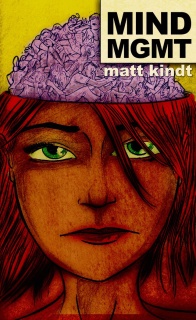 Written and Illustrated by Matt Kindt

Matt Kindt, the most original voice in genre comics, outdoes himself in this bold new espionage series!

Reporting on a commercial flight where everyone aboard lost their memories, a young journalist stumbles onto a much bigger story, the top-secret Mind Management program. Her ensuing journey involves weaponized psychics, hypnotic advertising, talking dolphins, and seemingly immortal pursuers, as she attempts to find the flight’s missing passenger, the man who was Mind MGMT’s greatest success–and its most devastating failure. But in a world where people can rewrite reality itself, can she trust anything she sees?

* From the creator of 3 Story and Super Spy!

* Akira meets Heart of Darkness by way of 100 Bullets!

Before the main story even begins, we are treated to “The Second Floor,” the first of the bonus features, which runs across the inside covers of the book. This story gives information about the history of MIND MGMT, the organization. To call this essential to the story seems incorrect, but it does nicely contextualize the main story, as well as provide some world building in (usually) wasted space.

Once the main story begins, we delve right into a huge question – since our dreams are the result of our subconscious, how can our dreams shock us? How can we surprise ourselves?

This question is left to burrow into your mind as the main narrative begins. On a commercial airline flight, 119 passengers of a 121 passenger flight come out of the air with complete amnesia. The only people on board, including the pilot and all the crew, who do not get mind wiped are a 7 year old boy, and a man named Henry Lyme, who boarded the plane but was not on board when the flight landed.

Our story follows Meru, a journalist trying to get to the bottom of this story two years later, and what happens when she attempts to track down Lyme. It is on that journey that Meru interacts with members of MIND MGMT, and we actually learn more about the organization from the bonus materials than we do from the actual story (so buy it monthly for crying out loud!), and we get our first spotlight on a member of the org in the “Mind Memo” backstory, where we meet “The Futurist,” a man with a gift for knowing what is coming next.

Adding to the ingenious writing is Kindt’s art, the beauty of which is hard to overstate. Kindt is able to draw a simple scene, without busy lines or intricate blocking, and yet more is said in those panels than in the most detailed two page spread imaginable. This is such a relief, and a nice respite from the world of overdrawn and overstuffed comics. (Don’t get me wrong, heavy detail can done very, very well, but the minimalism works here)

It is hard to talk about this book without spoiling it, so I’m going to keep this review short and tell you that this will be the best 4 bucks spent at your comics shop this week.