The post-Adventure Time adventures continue with issue five of this Boom! series! But does this still prove to be worth a look, only months after the end of the TV series? 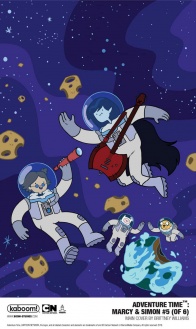 Marceline, Simon, Finn, and Jake are on a quest through the multiverse to free Betty from Golb’s control and resolve Simon’s greatest guilt. They’ll have to fight through lots of obstacles-including some aliens-before they eventually find Betty.

Even considering the fact that Adventure Time only ended less than a year ago, Olson still has a lot of fun visiting some of the less-frequented ideas that the series created in “Marcy & Simon” #5. The way we explore these towns has great pacing and sense of movement to it since Olson has given Simon a ‘Person-O-Meter’, which keeps him sane. It gives us a visual countdown to his slow descent back to the Ice King mindset, and a sense of urgency to the quest. Olsen pulls all the toys out from the bottom of the box once we get started. We get to visit the Crystal Dimension and explore how the Rainicorn/Dog feud has been continuing, and even a little more of the Dog’s and their beliefs. We also get some of the Pillow World and a nice nod from one of the citizens to Finn’s brief time spent in the dimension. Olson is well-versed in the world of this series and has a lot of fun exploring its lesser-known inhabitants.

One of the best elements of this issue is how the Marcy and Simon relationship is explored. The Person-O-Meter plays a big part in this because it gives a sense of tension that Simon could slip at any time and ruin their rekindled friendship. Simon in his purest form is earnest and adventurous, being unafraid to jump into perilous situations but always congratulating and encouraging everyone on surviving them, particularly when Finn takes the team to Pillow World. This brings out a more genuine side of Marcy, who stays collected and sees the best side of things when Simon is normal, like the objects in Pillow World. However, when Simon starts to revert, we start to see Marcy become upset and protective, showing how close the two are and how much Marcy wanted for Simon to be back to his original self. When in Lumpy Space, Simon comes back from a near-insane experience, and Marcy expresses how much she valued their recent time together, and how much he means to her. It’s a genuine moment between the two and Olsen plays up the emotions well.

Slimm Fabert does some great sequential work in this issue, particularly in scenes without panels. The first example pops up when the gang is traveling in the Crystal Dimension down the mines. Fabert cleverly uses the snaking pathways of the mine to show Marcy, Simon, Finn, and Jake finding a mine cart and riding it all the way to the end of the line. Later, we see the gang again falling down a crevasse in the Crystal Dimension, where each party member is a little further down than the other. Fabery cleverly sequences the dialogue and events as we make our way past each character before Finn makes the decision to travel to Pillow World. Even after that, we get a great double page spread while the characters are in Lumpy Space, where Marcy uses her watch to predict what would happen at the center of chaos in each dimension they travel to, depicting a great what-if type scenario for the gang. Fabert plays with sequence, and how to direct your eye through a page super well, even achieving a moving story without the use of panel borders.

Fabert also makes it a lot of fun to explore these dimensions not only narratively, but visually too. Right off the bat, we’re dropped into the Crystal Dimension, and Fabert brings it to life in all its simple cartoonish glory. The houses sport entrancing hexagonal crystal patterns and are spaced out by giant crystal rocks. The mines where the Dogs inhabit the Crystal Dimension is a lot of fun, too. Fabert uses a great fishbowl perspective when we first arrive there to give it an endless feeling and spots the walls with different types of crystal. The Pillow World, Lumpy Space, and Mars do have neat little visual easter eggs, like LSP’s mansion in Lumpy Space, but are a little more simplified. This works for Fabert too, however. The simplicity allows for their presence to constantly be felt in the backgrounds of important emotional scenes, yet they never steal the show or feel too focalized.

Color has always been an important part of Adventure Time as a franchise, and SJ Miller exemplifies that well in “Marcy & Simon” #5. Each set has a well-defined palette, and Miller seems to make them blend naturally into each other. The blues and emerald greens of the Rainicorn town meld perfectly as we go into the Dimension’s depths, to explore the navy blue and purple Dog mines. Once Finn moves the narrative into the Pillow World, Miller gives the tone a similar pink/purple palette, but much lighter and pastel in tone. Lumpy Space then works as a psychedelic mish-mash of all the palettes so far, where we the double page spread blends them all in fantastically in a streaming galaxy of color, and then traveling to Mars gives that psychedelia a more crimson intensity, before finally ending the issue on a mysterious, cold blue palette. Miller makes the vibrant Adventure Time color scheme evolve naturally over the progress of this issue, and it’s delightful to take in.

“Adventure Time: Marcy & Simon” #5 continues to be a light-hearted and fun return to the lesser known worlds of the TV series, whilst still wrapping up some loose threads from the show. Olsen highlights some strong character relations in Marcy and Simon, whilst Fabert cleverly uses page structure to give a single image a sequential feel, with Miller bringing it to natural, vibrant life. This is definitely one for the fans.