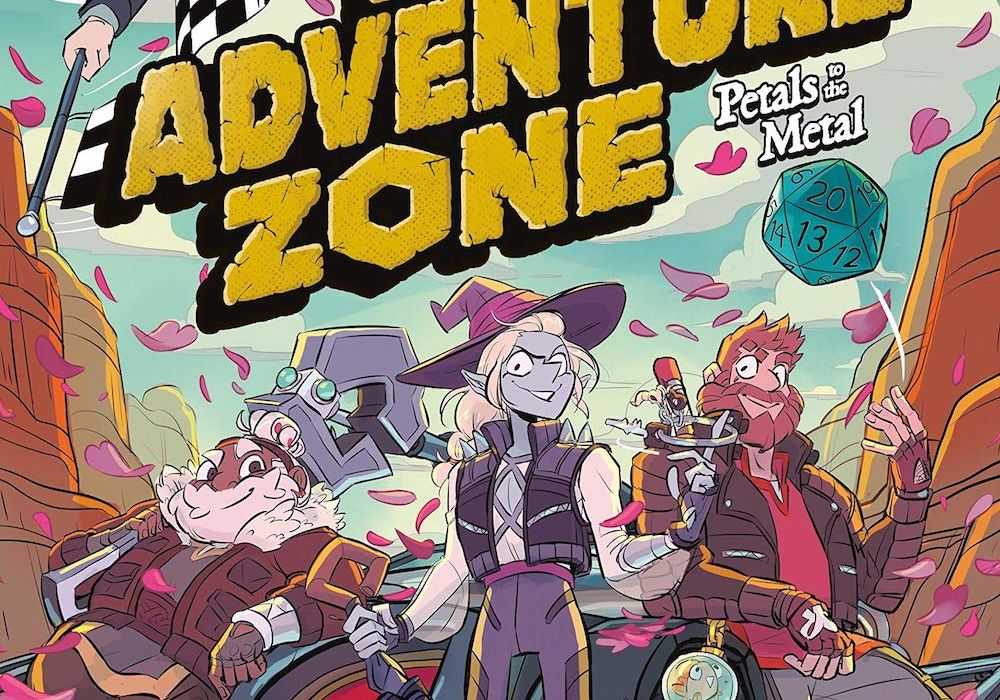 At this point, “The Adventure Zone” series of graphic novels are among the most successful comics of the past five years, and certainly one of the most successful straight up adaptations the comics world has seen in quite some time. As the story progresses through the ‘Balance’ arc, the comic is changing in necessary ways, not all of which are necessarily good. While the book still delivers a fine adaptation of the source material, some cracks are beginning to show. 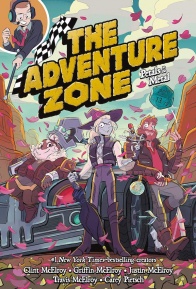 START YOUR ENGINES, friends, Clint McElroy and sons Griffin, Justin, and Travis hit the road again with Taako, Magnus and Merle, the beloved agents of chaos from the #1 New York Times bestselling graphic novels illustrated by Carey Pietsch, The Adventure Zone: Here There Be Gerblins and The Adventure Zone: Murder on the Rockport Limited.

Our boys have gone full-time at the Bureau of Balance, and their next assignment is a real thorny one: apprehending The Raven, a master thief who’s tapped into the power of a Grand Relic to ransack the city of Goldcliff. Local life-saver Lieutenant Hurley pulls them out of the woods, only to throw them headlong into the world of battle wagon racing, Goldcliff’s favorite high-stakes low-legality sport and The Raven’s chosen battlefield. Will the boys and Hurley be able to reclaim the Relic and pull The Raven back from the brink, or will they get lost in the weeds?

Based on the beloved blockbuster podcast where three brothers and their dad play a tabletop RPG in real time, The Adventure Zone: Petals to the Metal has it all: blossoming new friendships, pining for outlaw lovers, and a rollicking race you can root for!

“Petals to the Metal” is by far the most action-based Adventure Zone arc, and this comic leans into that by devoting a large chunk of its time to the battlewagon race that acts as its climax. One of the joys of the podcast was how each arc had a distinct flavor to it, with new settings, characters, and dilemmas joining the main cast in each new arc. One of my critiques of the second volume of the book, “Murder on the Rockport Limited,” was that it didn’t feel quite as distinct from the first volume as maybe it should have. That has been corrected here, with a different color palette and a more kinetic style.

That style came at the expense of some storytelling, however. Artist Carey Pietsch has added so much to the Adventure Zone world, but her strengths are in characters and personal moments between them, and this particular volume may have fared better with an artist more suited to drawing action. There were a few moments during the battle wagon sequence that I honestly had no idea what I was supposed to be looking at, and the action got garbled into an almost Michael Bay-ish swirl of objects.

Luckily, while the battlewagon sequence is a huge one in the book, it isn’t tonally representative of what this story is all about. The story is really about the love between Sloane (aka the Raven) and Hurley, the star-crossed lovers at the center of this book. And when it comes to the emotional beats, Pietsch knocks it out of the park. Her Sloane manages to convey empathy and love, even when she’s under the thrall of the Gaia Sash. Hurley falls in love with Sloane on the page, with her eyes and smile getting wider with each interaction. It’s a beautiful, subtly delivered love story in the middle of this absurdist fantasy tale.

This installment also did the best job thus far of editing a sprawling podcast into a concise OGN. This also leads to one of the funniest moments of the book, where eliminating an encounter and just showing its aftermath does an even better job than the podcast did of showing the absurdity of a situation. “Petals to the Metal” also somewhat retcons the fate of two characters, the first example of the book changing something this major from the source material. I say ‘somewhat,’ because it brings an element from the end of the show to the forefront much earlier, so its not so much a retcon as a reorganizing, and it is one that they’ve spoken about the reason for in interviews. Their intentions are solid for the change, and it mostly works.

Among fans of the podcast, there was a bit of a schism during this part the ‘Balance’ arc, which these graphic novels are adapting. The show went from more of an ‘actual play’ podcast to something a little more creative and unusual. Dungeon Master Griffin McElroy began to weave a larger, more intricate story into the show, and that necessitated more narrative decisions and less luck based rolling. As a listener myself, I didn’t mind this change, in part because Griffin used some innovative approaches to make that happen on the podcast. “Cut scenes,” to use video game parlance, started to appear, and there were scenes where it was just Griffin and one player, to allow certain characters to be fleshed out.

Now, this adaptation is clearly not an actual play podcast or anything of the sort, so the more narrative additions shouldn’t necessarily upset the apple cart in the way it did on the show. However, this installment begins to blend in some of the overarching narrative and, at least in this case, it’s not meshing very well. In fact, I found those additions more jarring here than I did on the podcast itself. Those elements really only appear in the last 20 pages or so, and may have been explicitly intended to shift the tone jarringly. The problem is that the book did not go to the same lengths as the podcast to both tease these elements earlier and silo them in such a way that it felt different. Here, it just sort of falls into the ‘regular’ narrative and doesn’t quite fit.

Overall, this series continues to be a joy to read, both for new readers and for fans of the podcast. The issues that come with the adaptation are less important than the new canon being created by Pietsch and the McElroys.