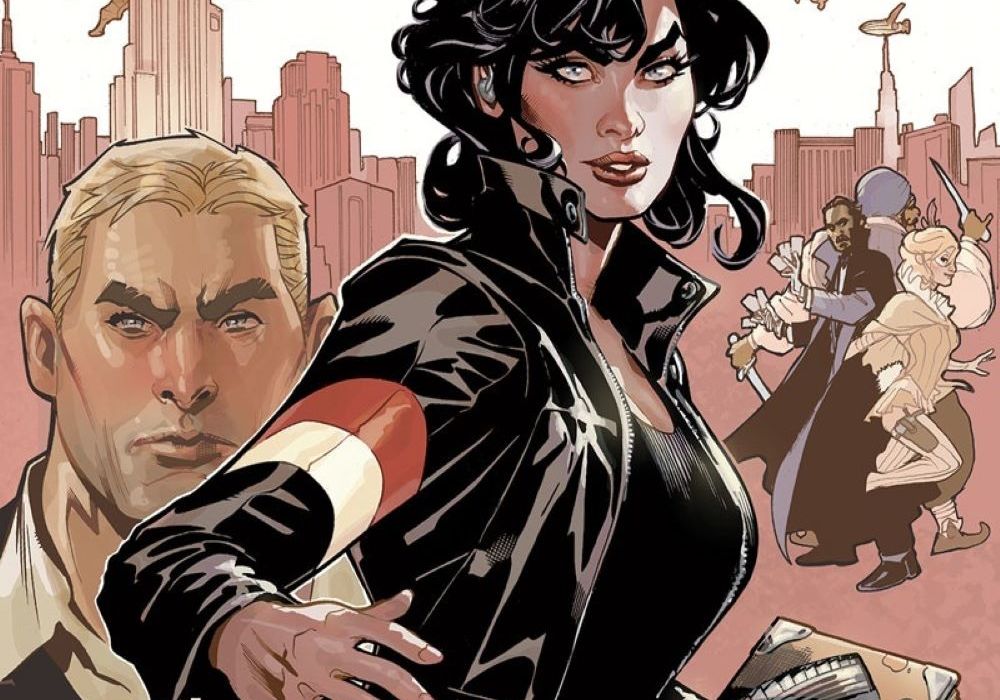 Straight out of the wildest, weirdest dieselpunk fantasies, “Adventureman!” #1 astounds from the first punch! 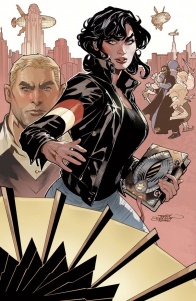 A CATACLYSMIC ADVENTURE DECADES IN THE MAKING!

In this WILDLY AFFORDABLE TRIPLE-LENGTH FIRST ISSUE, revisit how the legend of the greatest pulp hero of them all, ADVENTUREMAN, ended in a heartbreaking CLIFFHANGER with our hero facing execution at the vile hand of his ultra-nemesis BARON BIZARRE on the eve of the MACABRAPOCALYPSE…or did it?!? Eighty years after his apparent demise, single mother Claire and her Adventurefan son Tommy seem to be the only two people alive that remember the thrilling ADVENTUREMAN sagas…but from that memory burns THE SPARK OF RESURRECTION! WHERE HIS STORY ENDED…HER STORY BEGINS! This sense-obliterating, earth-shaking, imagination-quaking adventure that spans generations comes to you from MATT FRACTION (SEX CRIMINALS, Hawkeye) and TERRY & RACHEL DODSON (RED ONE, X-Men/Fantastic Four)!!!

With “Adventureman!” #1, Matt Fraction drops readers into an intriguing, multi-faceted world from the get-go, but not one with too much weighty realism to it.

First, we have Fraction’s take on the eponymous character and his allies, all hailing seemingly from roughly the 1940s. From the very first scenes, we come across ridiculous terminology even beyond that of most comics, to the degree that even the story is humorously self-aware. Adventure, Inc., from the eponymous Adventureman to his cadre of various proto-superheroes of various genders and ethnic backgrounds, all fall comfortably into the familiar trappings of retro-futurism and early twentieth-century technologies known commonly as “dieselpunk,” an offshoot of steampunk, and work very well as prototypical pulp action heroes in a kind of “super team.” The villains are equally wacky and adventurous, being over-the-top and not even trying to pretend that they are trying to do anything but destroy or revel in their own evil. It all feels so corny, so far into hammy theater, that the audience can’t help but enjoy the ride.

“Audience” is most likely the correct word, as Fraction completely changes the narrative partway in, showing a very different, more down-to-earth approach taking place in the modern day. “Adventureman” feels as though it is an over-the-top and perhaps over-acted tale for younger kids… because that, according to the story, is precisely what it is, being read by a single mother to her Adventurefan son. The transition to a closer “real life” story is fluid and natural, as while much of the over-acted narration is gone, the use of internal monologues and the efforts of the rest of “Adventureman!” #1’s creative team (to be discussed later) help to keep up the focus on entertainment and fun even in the most mundane of circumstances. Fraction uses protagonist Claire Connell to examine various other characters, from her family to odd people she comes across, showing that while her life is seemingly intentionally boring, it merely stands in contrast to the “adventurous” ones of just about everyone else in her life, from her son to her six sisters and her father, not to mention the occasional customer at her bookstore. After all, “adventure” doesn’t necessarily have the same definition for everyone, and some people may want nothing to do with anything exciting in the first place.

Where the two tales, from the dieselpunk book to the calmer and more relatable present, coincide is where things get really interesting. From certain people’s attire to others’ apparently supernatural abilities, Fraction leaves a lot for readers to question. What is the world of “Adventureman!” actually like? How much of the seemingly fictional novel is the truth? Could dieselpunk futurism really function in this world’s modern setting? What is happening here?

Terry Dodson and Rachel Dodson’s collaboration on artwork is absolutely nothing to sneeze at, and may even be more of a draw than the script itself. Gorgeous illustrations of the human form help to extol the beauty in every individual, especially in close-ups. Variable thickness in lines, whether through Terry Dodson’s pencils or Rachel Dodson’s inking, helps to put special emphasis on personality and emotions, especially for central characters. While that kind of depth is lost in further shots, it is no more nor less an issue than for other illustrators or colorists.

Even outside of the modeling of the individual characters, the entire story itself resonates far greater with the highly animated art style that fits just as well into a mundane setting as it does into a high-flying action adventure. The heightened emotions of various characters are put into greater definition through fast-paced action or intense thought, while an intricately drawn calm face can simultaneously give a bizarre sense of “action” regardless by way of a plethora of events going on around it in the background. Meanwhile, a decided lack of definition in the form of an intense blur effect allows inhuman characters to remain decidedly uncanny and disturbing by contrast with those around them.

Terry Dodson utilizes various color palettes when dealing with the two different stories nestled within the pages of “Adventureman!” #1. “Adventureman” the book’s world has a more muted colors for everything, giving an increased impression of being from an older time, as if memory of those events have faded from existence as they are rendered nothing but words on a page told by an audience that was not present. By contrast, later tales are darker and have a higher opacity overall, the muted nature being essentially gone due to being much more “modern” and newer than those eight-decade-old events. In both cases, there is a very effective use of light and shadow, adding to the three dimensions of such a tale while also distinguishing recollections of the past or occurrences in the dark from those in the light of day as they are happening. Similarly, deliberate contrast between light and dark, such as a single-color background against a purely black figure, helps to emphasize both, along with the actions taking place, adding a sense of “reality” to it all.

Clayton Cowles is on top of his game with the lettering for “Adventureman!” #1. The words he writes out are emphasized as particularly bold, be it literally in terms of font or figuratively in terms of more artistically-drawn out letters. Introductions of characters within “Adventureman” the novel setting are given far more focus, from a large name in an odd font to a description, complete with an exclamation point, right after, in classic pulp style, not to mention that of some wackier comic books in general, adding to the overall sense of, pardon the pun, adventure, not to mention fun.

Cowles also uses the lettering choices to emphasize Claire’s apparent tinnitus (or perhaps some other hearing issue). Certain lettering choices help to make words seem deliberately intrusive or far too loud, with the letters crashing together and seemingly pushing their way into a panel instead of simply being in the background. Meanwhile, when she removes her hearing aids, those same words are either blurred out to being completely incapable of readers’ understanding, lowered in opacity and color to be far more difficult to read, or both, helping to create the same kind of comfortable silence that Claire herself enjoys in more peaceful moments and to visually illustrate the idea of consciously not listening to someone.

Final Verdict: 8.0– From excitement in the past to mystery in the present, “Adventureman!” #1 leaves readers aching for more!