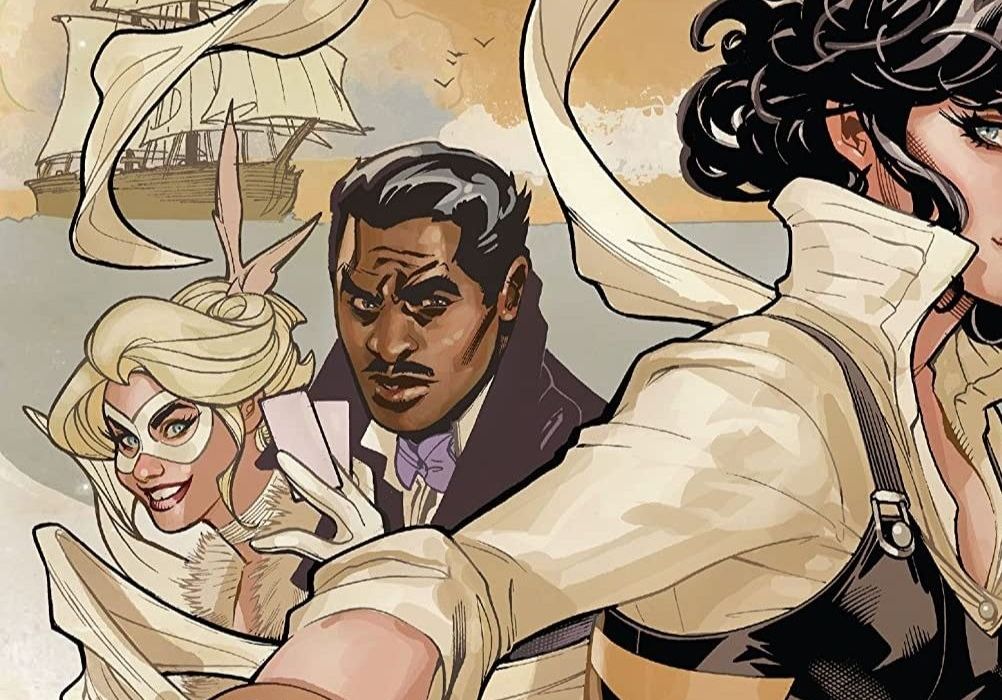 There’s always a little part of us, somewhere deep down, that wants to imagine our favorite fiction is real. That someday you’ll turn down an alleyway or get a mysterious letter and get whisked away to a world of fantasy and adventure, where you discover that your average life is becoming something special. There’s something escapist in imagining yourself on the pages of an adventure serial, or a fantasy adventure, or a science fiction epic. But to bring those stories into reality might not be quite the fantastic experience one might expect, the threats of a magical enemy in a mundane world, putting those at risk with no way to defend themselves. That seems to be the central thesis of “Adventureman” #3. The problem, though, is that it feels like Matt Fraction skipped a chapter or two in the telling of this story. Perhaps it’s a way of building a bigger mystery but it comes off as confusing as a standalone issue. 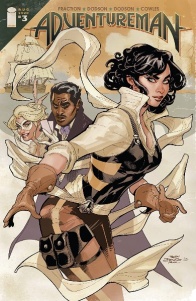 “Adventureman” #3 begins in the hospital with Claire after her world has changed. She is stronger, faster, and able to hear again. While those around her are concerned, she is excited and invigorated, looking to help those around her. This part of the issue works well. Claire’s excitement is infectious. The problem is that it feels like there were some chapters skipped, there is very little explanation about how we got here. Even having caught up with the series, it still feels unclear how we got here. It seems that Claire has been given access to Adventureman’s skills and memories, using details from the adventures to help other people, but we’re missing key details of how it all happened. This isn’t necessarily a bad thing, but to go from Claire coming home in “Adventureman” #2 and then straight to the hospital in #3 feels a little jarring. There’s not even a conversation about the family’s concern, which might have helped at the beginning of the issue.

That being said, the serial adventure sequence of “Adventureman” #3 is the highlight of the issue. Her newfound skills are best showcased in the flash to the pirate fight, which lines up with saving a patient’s life in the hospital, as Claire is able to successfully create a field blood transfusion, mimicking Adventureman saving his friend. The thing that makes this section work so well is the art from Terry and Rachel Dodson. They establish three distinct tones for the different types of storytelling, with flashbacks being colored with an almost olive green color and Claire’s visions as the Adventureman in a bluish tone imitating the look of the classic serials that inspired Fraction and his team. By creating three distinct visual languages, it helps to differentiate if the events we’re observing truly happened or if they’re happening in some created space in the connected mind of Claire and Adventureman. It also raises questions about what is real. Clearly, those in Claire’s life are concerned for her safety. A ct scan shows that her brain is firing on all cylinders, she has gotten taller and stronger, but most concerningly, she has lost time. There are things that she simply can’t remember. Upon advisement with doctors, she’s encouraged to take some quiet time for herself. But it seems that there are growing threats.

The problem of the issue is that it is the one most grounded in reality. The other two issues have a greater blend of the magical and mundane, and overall are a lot more whimsical and fun. “Adventureman” #3 seems to be presenting how the rest of the world sees Claire, a little unhinged and erratic. There were moments in the other two issues where we see how others are responding to Claire, but in those moments there are real tangible things that we see as the audience. Perhaps this issue will work better when the story is printed as a whole, but as a standalone issue, it’s not playing with the central premise as much, which just makes it feel out of place. Similarly, there isn’t as much playing with the format. While the narration feels like dime-store pulp novels Fraction is aiming for, it’s presented in fairly standard narration boxes instead of bleeding into the panels. That being said, there are some creative uses of page layout and text bubbles near the end of the issue with the reveal of Abbathexiddion, beast god of the ultra void. While the black bubble with white text usually reads as robotic or joyless, here it reads as deep and bellowing. But once again, the coloring of this panel seems to fall somewhere between the coloring of flashbacks and the Adventureman sequencing. It makes the whole sequence feel surreal, which further makes us question the reality of the situation.

“Adventureman” #3 lacks a lot of the fun of the first couple of issues. It seems that Fraction is going for showing the other side of the equation, what the real world sees when they look at Claire, but that just removes the energy of the first two chapters. While there are clear benefits Claire is experiencing by following the trail left for her by the allies of Adventureman, it seems that she is isolating herself from the world. It seems as if there’s a possibility that her family will begin to fill the other roles, but at the moment, she is alone (but excited.)

Final Verdict: 5.9 While “Adventureman” #3 might work better in a broader context, as a standalone it misses the mark.