Fans were shocked when DC prematurely pulled the plug on the “Super Sons” ongoing featuring Jonathan Kent and Damian Wayne. DC is now back with a 12-issue mini-series featuring the return of writer Peter Tomasi and artist Carlo Barberi.  The creative team is tasked with working within the confines of the current continuity as the title takes place between previous issues. While the idea of a flashback isn’t the most intriguing angle to pick the continuity up from, it does give Tomasi the advantage of working within his comfortable “Super Sons” status quo. Does “Adventures of the Super Sons” #1 find a way to stand out from previous issues while honoring what came before? 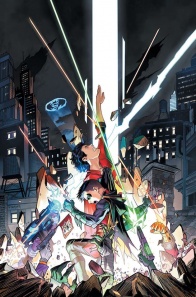 The Super Sons are back in an all-new 12-issue miniseries written by Peter J. Tomasi! Check out the lost and secret adventures of Damian Wayne (Robin) and Jon Kent (Superboy) in this flashback miniseries that takes a deep dive into the bombastic bromance between the sons of the DC Universe’s greatest heroes. It’s an epic dual storyline that transcends current events, as Superboy and Robin find themselves targets of an interstellar team of young badasses called the Gang.

Writing the “Super Sons” requires a really firm set of rules that can be extraordinarily difficult for a writer to conform within. Tomasi and Barberi work well in these rules, but they stumble a few paces along the way. The title has a great self-reflexive and silly, summer attitude. The first page is a charming wink and nudge directly to the readers and serves as an endearing character moment for Jonathan. “Super Sons” also retains actual stakes and a solid direction for the duo to explore. The script explores the celebrity and privilege both protagonists would have if they actually existed in the real world.

Carlo Barberi does a wonderful job staying within the high bar for the art set from past entries in the series. The first page is really loose anatomically but full of great expressions. While the details and anatomy don’t have the razor-sharp aesthetic of the previous contributor Jorge Jimenez, Barberi does have the knack for expertly designing each page’s layout. The composition of each page is impressive. The action sequences convey lots of movement allowing Barberi to really stretch the form of comics. Barberi does have a tendency to draw some of the younger characters with heads that larger than their actual bodies. The line-work sometimes lacks the tiny details like rustling hair or architecture in the background. Overall, the art is incredibly expressive and a joy to look at throughout the issue even if it is lacking some important detail. The colors from Protobunker are also appropriately vibrant and really match the tone of the issue.

The issue starts to stumble when Tomasi introduces a team of villains who are far too silly to fit the relatively grounded tone of the rest of the issue. Jon and Damian are really unique protagonists and they require an incredibly specific threat which is not comparable to a foe the Justice League would face. However, this issue takes the idea of specialization for Damian and Jon too far. The beginning of the story has a more grounded threat fitting the tone of the series much better and is a better match for the abilities of Jon and Damian. While the idea of a cheesy set of villains may seem minor, it could be a big component of the mini-series as a whole. There is little backstory or opportunity for Tomasi to develop these characters which may contribute to their lackluster debut.

The issue has a really strong pacing with the idea of passing time used directly as a structure for the overall series. Tomasi wisely takes Superman and Batman out of the picture allowing for Damian and Jon particularly to stick out from the rest of the cast members. Jon and Damian still have unique personalities, with Damian having a kind of offbeat, loner attitude. Sometimes Tomasi takes the idea of Damian’s raised intellect and immaturity too far, but he seems to be having fun with these characters.

The worst aspect of the issue might be the cliffhanger which offers little motivation for readers to come back next week. The issue awkwardly comes to a close during a fight scene which should have carried more weight. Upon overlooking some of the stranger tendencies “Adventures of the Super Sons” #1 carries, the script is still solid until the last moments of the issue. Tomasi perfectly captures the spirit and energy of the original series and pays lots of attention to the new structure the title has. Hopefully, future issues will be able to rectify some of the strange storytelling decisions made at the end of the issue while keeping Tomasi’s great sense of characterization. Barberi shows lots of potential here and with more detail in his work, he could be one of the best creators in DC’s roster of artists.