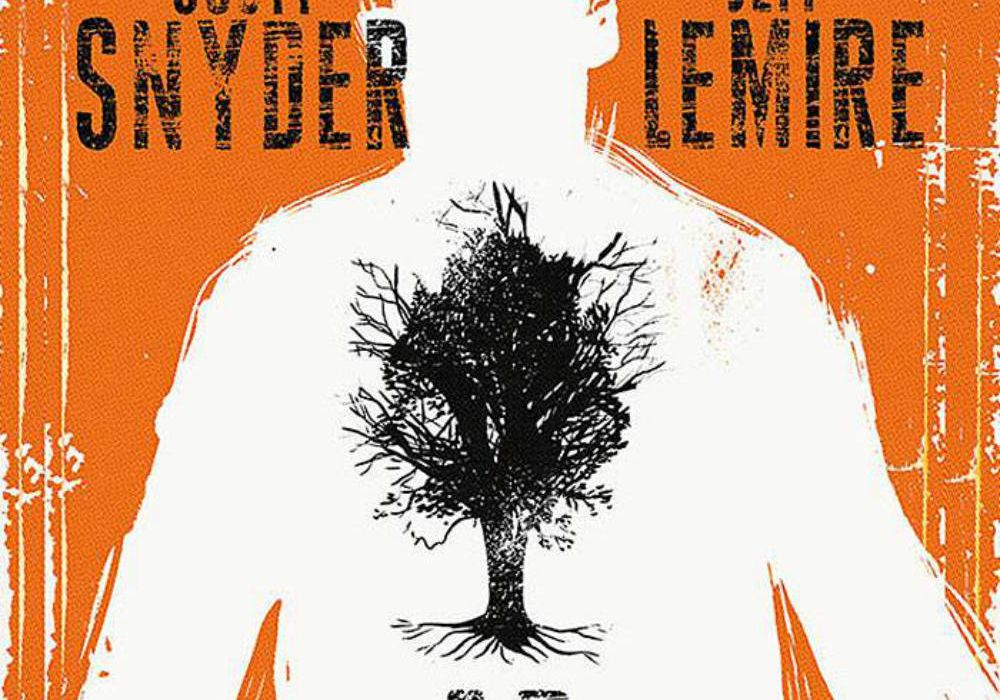 It was only a matter of time before Scott Snyder and Jeff Lemire collaborated on a project together. In fact, the two are such good friends (and in the world of mainstream comics, creators tend to want to work with people they actually like) and rose to prominence in and around the corporately-owned superhero companies, I’m somewhat surprised there hasn’t already been a large scale work from the two of them until now. “A.D.: After Death” #1 finds Snyder and Lemire playing a sort of trust exercise, turning in this mixed-media meditation of mortality over 70-some pages. It reads like the two are trying to push each and compete with each other to generally solid effect. 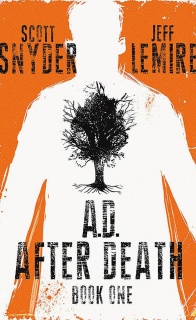 Written by Scott Snyder
Illustrated by Jeff Lemire
What if we found a cure for death?
Two of comics’ most acclaimed creators, SCOTT SNYDER (WYTCHES, Batman, American Vampire) and JEFF LEMIRE (DESCENDER, Moon Knight, Sweet Tooth) unite to create a three-part epic like no other, set in a future where a genetic cure for death has been found. Years after the discovery, one man starts to question everything, leading him on a mind-bending journey that will bring him face-to-face with his past and his own mortality. A unique combination of comics, prose, and illustration, A.D.: AFTER DEATH will be serialized monthly as three oversized prestige format books written by SNYDER and fully painted by LEMIRE.

Sometimes it’s easy to forget that Scott Snyder got his start by writing short stories. There’s a collection out there — Voodoo Heart, if you’re interested, though bear in mind it doesn’t have one of his strongest prose pieces, “The 13th Egg” — where the fantastic serves mostly as a backdrop to his characters’ inner lives and struggles. Like Michael Chabon or latter Stephen King, it’s very introspective and empathetic. Snyder could put together a sentence and evoke some fascinating images and touch on strong feeling, even though his stories had an MFA tint to them. Eventually, Snyder joined the comics world and his stories fell to the way side.

Lemire, too, began much quieter. His “Essex County” comics were reflective slice-of-life stories, snapshots of a bunch of characters in one moment in time. It wasn’t so much about the action, but the emotion, the grandeur of the more barren Canadian wilderness.

Both of them dust off those old skills for “A.D.: After Death” #1. Despite its fantastic premise, where humans have found a cure for death and live out the rest of their lives in these cycles, the book is more about the search for understanding and connection. There’s a scene near the beginning where Jonah, our scientist hero, is trying to make his way through the woods, only to find himself being attacked by these weird purple alien things with lots of eyes. I’m not sure if this was a dream sequence or not.

There are two parts to “A.D.: After Death” #1. The first is an illustrated prose section, which flashes back to 1982 (it’s sort of like the original edition of “Stardust”). Young Jonah is on a random and sudden Florida vacation with his parents, where, during on happy moment, his mother falls over. He reflects back then on his childhood with a mother whose health is rapidly deteriorating in a way no one in the medical world can understand. The second part takes place in the story’s present (825 AD), where Jonah, now a scientist and heavily implied to be one of the people responsible for finding the cure for death, has just transferred to a new facility. He’s also stealing artifacts from the old world — art and old equipment and cows and whatnot.

Both sections are quiet and contemplative, which Lemire depicts with aplomb. It’s actually kind of the perfect story for Lemire to draw. His watercolor work is nostalgic and he’s able to find the perfect image to capture everything Snyder’s writing about. He leads us into these double page spreads, often showing the expansive world and the tiny human figures among it. My favorite was during the introduction to the Inez character, where she stands facing a violet violent electrical storm in the mountains. His sketchy line-work also makes it feel that at, like, any moment, everything is going to fall apart.

One segment is often stronger than the other, but more often than naught, it’s a toss-up between them. And maybe that’s appropriate for the material, since so much of the book deals with mortality, and people trying to deal with losing said mortality.

Apart from the title and the blurb setting the location, there isn’t much telling us how this post-death world operates. It’s not even much like Children of Men either, where the history is in the background. Frankly, Snyder and Lemire don’t seem interested in exploring what this world is like in the first place. This is character-driven science fiction, where the focus revolves more around how these characters are acting with each other, what they’re saying and what they’re avoiding saying. You have Jonah, desperately searching for something (maybe having to do with those multi-eyed alien things near the beginning?), and Inez, who wants out of the cycle. There’s a history between them and I liked how Snyder and Lemire cast it around a floor mat.

If I recall correctly, when “A.D.: After Death” #1 was originally announced, Image listed it as an OGN. Somewhere along the way they elected to instead deliver it in these oversized issues. And while that’s fine, because serialization is part of the comics, this doesn’t feel like a story that was made to be serialized. Snyder and Lemire take their time with the material, intent on developing mood and empathy rather than mystery and action. It’s structured as if they didn’t have to worry about giving it a cliffhanger hook because they had a longer space to tell the story. The book offers a strong set up without necessarily being a strong first issue. Questions are hinted at without being distinctly asked. The character work, however, and those fantastic images, more than makes up for the unknown stakes.

The ambition and delivery of “A.D.: After Death” #1 is definitely something to behold. Snyder and Lemire attempt different techniques and modes with the material, leaving us with a rich experience. It’s quiet and contemplative and sort of beautiful. I admire what it’s doing and interested to see if they’ll be able to pull it off.

Final Verdict: 8.0 – Maybe isn’t the best as far as first issues go, but definitely an ambitious and fascinating piece of work.