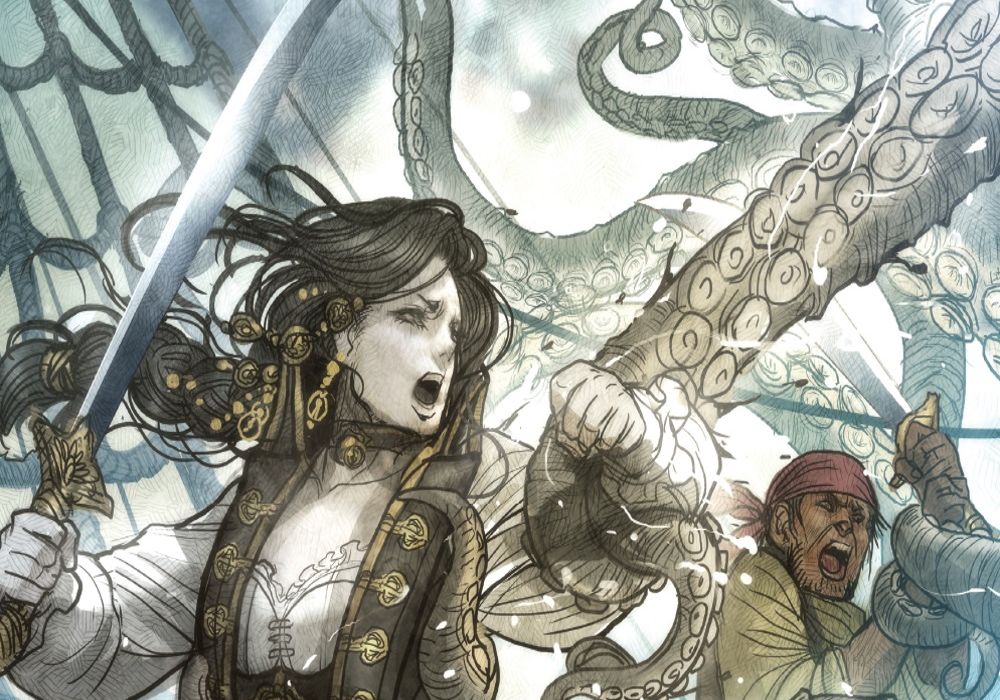 The act of turning a series into a franchise makes me nervous, but “Belit” is a good comic. One way to look at it is proof that a wider shared universe of “Conan the Barbarian” stories is an idea with merit, but that is missing the point entirely. “Belit” does not succeed because the world and characters of Robert E. Howard are intrinsically compelling. It succeeds because a good creative team with a strong vision make it succeed. And in a way, that force of personality is also what the book is about. 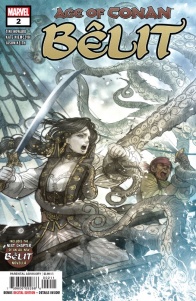 FIRST BLOOD ON THE HIGH SEAS!
•  BÊLIT finds her first battle at sea!
•  But will her impetuous nature lead the crew to victory, or sink her ambitions before they’ve begun?
•  Either way, CAPTAIN SATURNINUS will need a new ship!
•  PLUS: The next chapter in the all-new BÊLIT prose novella!

Belit, the Pirate Queen of the Black Coast made her debut in an original Robert E. Howard Conan story in 1934, and was first drawn by the legendary Margaret Brundage on the cover. The Roy Thomas “Conan” comics in the 70s gave a substantial role to Belit, giving her a new lease on life. For my money though, the best Belit was written by Brian Wood in the Dark Horse Conan series and drawn by Becky Cloonan. This version of Belit was a feral, id-driven animlaistic arch criminal, full of guile and a mad sexual desperation. It was very Robert E. Howard, but Cloonan always managed to project a real power through Belit, making her a worthy barbarian in and of herself.

I’m not saying a male creative team couldn’t craft a good Belit spin-off, but I’m glad this Marvel series puts the character in the hands of women. This is a new origin story for the character, and you can see the influence of all the previous takes on the character. She’s younger, but she already has her regal bearing. She’s bossy, but she hasn’t yet descended into monosyllabic bloodlust. She also really wants to kill some sea monsters, and if that’s not a compelling motivation for the Hyborian Age, I don’t even know what we’re doing here.

Tini Howard is sort of making a career out of barbarian characters, and that is freaking awesome. Take a look at her series “The Forgotten Queen” over at Valiant, or her “WWE” comics! She writes bloodlust as believably as other writers throw in brooding angst. It’s a whole lot more fun. Her cast of supporting characters aren’t as memorable, but they don’t have to be. They are all here to be foils to the future Pirate Queen, and all of them cleverly bring out different aspects of her personality. Maybe they respect her, and allow her to be benevolent. Maybe they oppose her, and gives her an opportunity to kick ass. Maybe the are antagonists, and she’s gotta feed them to the fishes. Tini Howard makes Belit’s bloody work a pleasure to read.

But the real MVP of the issue is artist Kate Niemczyk. You might be familiar with Niemczyk from her work on “Man-Eaters,” which is weird and envelope pushing. It doesn’t scream Conan. And Niemczyk does not pull back and start drawing a house style. She’s doing something weird, weighty, and more than a little bit cartoony. While a lot of modern “Conan” comics fall back on an update of the 70s style, Niemczyk just does something that is all her own. It looks like a really dark season of She-Ra or something. I like it.

Niemczyk is also the one making the character designs work. Tini Howard may be using the supporting cast as foils, but Niemczyk is giving each of them a lived in feeling. Her Hyborean Age is a little weird looking- the technology of the ships looks downright Napoleonic. But that’s forgivable because Niemczyk is forging out her own version of a familiar place and forcing us to see it in a new light.

And if we are doing a Belit series, that is more than necessary. Belit was a hyper-sexualized pale-skinned murder and fetish object. To give her a new series is to give her an agency she’s never been afforded by her, and that means killing the past. So what if the rigging, the clothing, and the throne of Kush look radically different from what we’re used to? So what if Howard and Niemczyk want to stomp on our memories of the glistening musclebound Cimmerian? Belit would burn down anything that stood between her and her objectives (which I remind you are murdering lots of sea monsters). The fact that Howard and Niemczyk would do the same shows they are living the values of their character.

Final Verdict: 8.5 – Tini Howard, Kate Niemczyk and Belit the Pirate Queen take no prisoners in this bold and original spin off series.