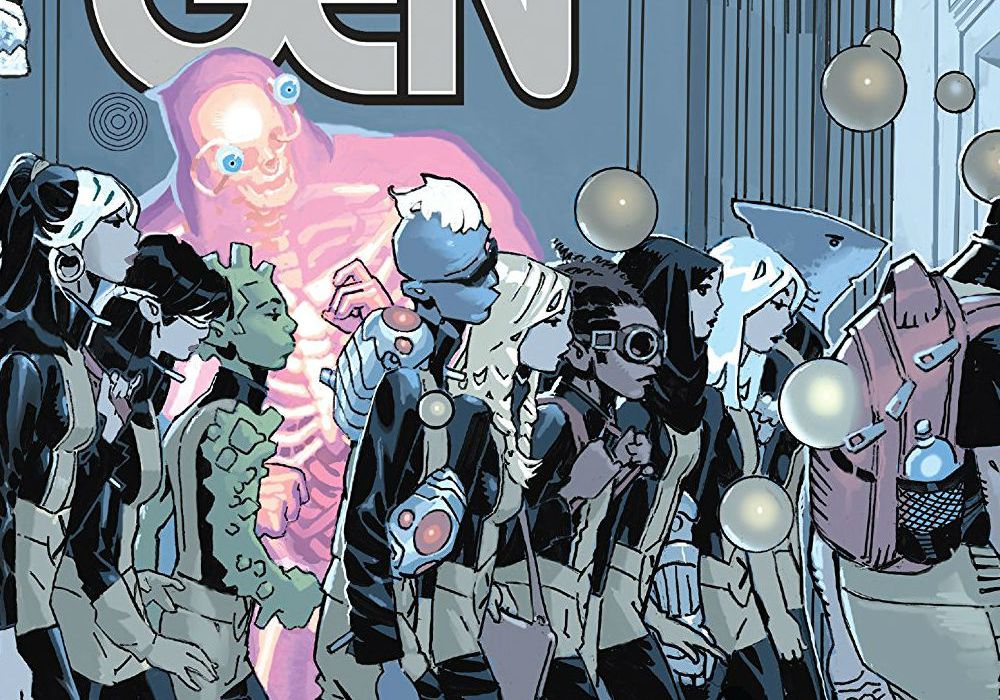 I bought my very first comic book back in fifth grade, a Marvel Select ‘double-sized flip magazine’ from the 7-Eleven. On one side was Joss Whedon and John Cassaday’s “Astonishing X-Men” #11. On the other was my favorite story of the two, “New X-Men: Academy X” #11 by Nunzio DeFilippis and Christina Weir. After that first purchase followed many more 7-Eleven flip magazines and trade paperbacks from Barnes & Noble. I’ve only gotten deeper into comic books since then and this isn’t even my final form. Today, my first comic’s pages are frayed and torn while the cover is long gone. Still, it holds a special place in my heart. The same goes for all the Academy X kids, from Anole to Prodigy, too. 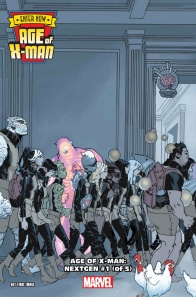 Written by Ed Brisson
Illustrated by Marcus To
Lettered by VC’s Clayton Cowles
Colored by Jason Keith
ENTER THE AGE OF X-MAN! The perfect heroes for a perfect world! The X-Men have helped make the world into a utopia where living in fear and hatred is a thing of the past. All people are united under the banner of mutantkind, and all of mutantkind idolizes the X-Men. Jean Grey! Colossus! Storm! X-23! X-Man! Nature Girl! Magneto! And of course, the amazing Nightcrawler! When danger threatens the world, the Marvelous X-Men set things right for the good of all. And no one dares say otherwise.

I say all that so you know, I am personally very biased towards any comic focused on them. It feels like those comics are a rarity nowadays. It may largely go unnoticed, but it’s been rough for the 2000s-era Gifted Youngsters. Several were depowered and killed back in M-Day over a decade ago. Most are now in limbo, not allowed to graduate and always playing second-string to the ‘varsity team’, so to speak. When it’s time to kill off a mutant though, guess who’s first on the chopping block?

“Age Of X-Man: NextGen” #1 focuses on the students of the Summers Institute for Higher Learning, the lovable Glob Herman especially. The X-kids are all sorted into four disciplines: law enforcement/civil management, agriculture, medicine and history. This aspect is especially reminiscent of “New X-Men: Academy X”, intentionally or unintentionally. An important part of that run was how the students were organized into training squads (New Mutants, Hellions, etc.)

As an agriculture student, Glob spends his peaceful days feeding the chickens and writing ‘fan-fiction’. From context, it’s clear that Glob remembers reality before the Age of X-Man. On the other hand, Pixie and Armor are training for action with civil management. When a fire breaks out across town, the two rush to help. They witness Blob detaining fellow student Bling! and threatening to mind-wipe her because she’s determined to reveal the true fascism hiding under the surface of this utopian society.

Armor wants to help but her hands are tied. She’s even more conflicted when she sees Anole running from the scene. He warns his friend that Bling is telling the truth before taking off into the night. Hisako meets Glob in secret to confide in him. Glob decides that Hisako deserves the truth before abruptly attacking her.

The art is on point throughout this issue. The Chris Bachalo cover alone is beautiful, including neglected characters like Tempus, Triage and Maggott. Marcus To is a solid pick for the interior art, for sure. To has experience drawing younger heroes. He’s drawn titles such as “Red Robin” starring Tim Drake, “Teen Titans” and most importantly “X-Men: Blue”. He’s no stranger to this side of Marvel. The artist manages to clearly covey emotion on Glob’s face, which is particularly impressive since he’s a skeleton. The color-coded training uniforms (the poor history students get stuck with brown) echo “Academy X” too.

The characters and their interactions are enjoyable throughout the issue and a welcome change of pace. The X-Men’s setting has been a school for most of their history but they have strayed from that being the focus. Seeing the X-kids just eat lunch and give each other a hard time is refreshing. The X-Men are a team first and foremost, all business all the time, but the students are good friends. The lead character, Glob, has had a slight surge in popularity in recent history. While it would be great for some other ignored students to get their time to shine, he is always welcome as a main character. His underdog nature and very unique appearance make him very endearing. The hinted Glob-Armor pairing comes out of left field but is kind of adorable. The story is paced a bit slower, not offering much in terms of action. When Hisako goes to assist with the fire, she never even armors up. The other students are sidelined completely, the in-story reason being their designations. Disappointing as that is, it is somewhat understandable. This is the first issue and time needs to be devoted to both the set-up of future events and world-building.

Now, while I’m invested in the characters, I don’t find the world around them to be terribly interesting. A ‘mutant utopia with something wrong behind the scenes’ has been done before in ‘House of M’. It strikes me as a somewhat recycled idea which can’t exactly be ignored. To get a greater sense of what is happening (for example, why Glob and Hisako can’t be alone together), one probably has to pick up the other Age of X-Man titles. This is a ‘tie-in’ after all, by nature it isn’t the main story. If you wanted to read just this and ignore the rest of the event, you’ll probably be a little lost. Still, “Age Of X-Man: NextGen” #1 manages to be one of the strongest releases of this event so far.

Final Verdict: 7.0 – “Welcome to the Age of X-Man, Glob Herman – Hope you survive the experience!”