Newcomer publisher Vault Comics have been making their mark with quality sci-fi comics this year. Now they have released “Alien Bounty Hunter” #1. And – it’s being ‘produced’ Mark Wahlberg? That’s really all I needed to know for my interest to be gauged. 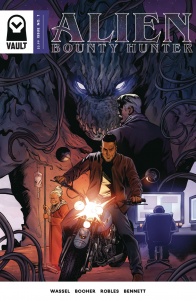 Ben Madsen is a bounty hunter from Arcadia. Yeah, he knows how that sounds, but the job has its perks. He’s got time to take care of his aunt, a community that loves him, and the transition from USMS made sense. Following a newsworthy takedown, Madsen is offered a bail he can’t ignore. It’s attached to a ridiculously dangerous-sounding fugitive, but aren’t they always? Unfortunately for Madsen, his mark is not from Arcadia, and the city he’ll be tracking him through… well, nobody knows it exists. Penned by award-winning writer Adrian Wassel (The Gifted) & David M. Booher (Powerless) with art by Nick Robles (Clockwork Angels), Vault Comics brings you an original sci-fi franchise, produced by Mark Wahlberg and created by Stephen Levinson.

Given the name, I was surprised to see that although an alien did appear, it was for roughly two pages of this whopping thirty-page debut. A lot of what Wassel and Booher present here is padding – getting to know our titular character Ben Madsen, his surrounding community, and what drives him. It’s a good way to subvert expectations, as this is a surprisingly human book. It’s just a shame that most of the issue is spent fleshing out Madsen’s backstory instead of getting on with the actual plot. A lot of the facts presented – such as the plot point that he’s trying to get his aunt into a home to retire – feel like they would have had more impact being revealed in the future.

There is a lot that’s satisfying about having this very grounded backstory, however. It’s a great way to sell people who might be turned off by the oversaturated action movie market. A lot of the characters, Madsen included, are really fleshed out already and feel believable. Madsen himself comes off as a working class man type, but is intelligent enough to feel like a unique character. I love the fact that he has an Oracle type character in Brooks, I’ve been turned onto the idea that a solo hero is simply not effective, so there’s an ‘eye in the sky’ role filled. Not only that, but Brooks is a quirky character – he’s not a stereotypical techy, he’s a disgruntled thirty-something guy that’s just good at what he does.

On the alien side of things, the context Wassel and Booher give regarding extra-terrestrial life is pretty original – sure, there’s an unthinkable amount of planets out there, but very few are actually liveable. It gives a very underground, Area 51 feel to the book, but also feels reminiscent of District 9 and the better parts of Men In Black. However, the government agency hiring Madsen to go after the aliens feels so cookie cutter. The debriefing scenes are filled with aged, dress-suit sporting white guys, summed up in the character Miles Sullivan, and it feels so generic. Wassel and Booher do have a bit of fun with how desperate they make Miles seem, a far cry from the stand-offish CIA types that populate these genres, but it doesn’t do much to add interest.

Nick Robles does a great job handling art duties in this issue. The whole issue has a bold, clean aesthetic with jazzy, vibrant colors that feel like a mix between the best horror and gangster movies of the ‘80s. You’ll see what I mean almost immediately from the get-go: the second page has Madsen chasing someone amidst a classic L.A. sunset. It’s both visually striking and serves as a great way to set context – for the rest of the story, you never question where this scene is taking place as Robles does such a good job of showing without the telling.

What I love best about Robles’ work is that all his characters are so believable. I might be repeating myself, but with a comic name like “Alien Bounty Hunter”, it would be so easy to fall into action hero stereotypes. And sure, Madsen is a pretty buff dude who vaults around a lot, but there’s a key difference – Robles makes sure that Madsen smiles and feels other emotions rather than just grimacing. When you see Madsen talking to his Aunt, he’s very at peace and calm, something that adds a lot to his overall character depth. Similarly, although we only get to see the alien Nyx for about two pages, Robles makes sure you can see this isn’t your run of the mill grey-skin. Nyx commands the page that he debuts on, with a slick, uncomplicated design that would make sci-fi filmmakers gasp. Every character visually feels important on the page, a task which Robles makes look like a breeze.

The sequential action here is very tradition action movie-esque, but by no means is that a bad thing. Following Madsen run from panel to panel often feels like watching a professional parkour tournament – characters seamlessly leap through windows and over buildings like no tomorrow. It’s a lot of fun to read, but is well-paced too – Robles gives us resting periods as Madsen might stalk his prey through a dark warehouse, or an action scene will be interrupted by the revelation of government intervention. In lesser hands, it might be jarring to the story flow, but Robles uses them more as resting points for the reader to gather their thoughts and catch up on what just flew past them.

As I said before, Robles brings a stylish vibrancy to this book. Every scene glows like it’s the warm moment just before dusk, and it’s pretty stunning. It brings a great sense of continuity to the book, as from the start the L.A. double page scene is a bright, fuzzy orange, and this motif carries throughout. Robles adjusts his palette to suit the scene at times, however, like the cold azure of the night rooftop scene featuring Nyx. The colors still pop with neon characteristics, however it’s more of a mysterious, haunting mood than the dayglo of the beginning. It’s great to see Robles already has such control of setting mood through colors, and I look forward to seeing how he continues to do so throughout the series.

“Alien Bounty Hunter” is a curveball for unsuspecting readers. The alien plot feels a little generic, and there’s not a lot off mystery or intrigue to the characters, but the story is surprisingly human, with an interesting set-up. Nick Robles steps up here however, ensuring that this looks like a slick, well-choreographed action movie that would fit right alongside anything in Hollywood cinema. Come for the story, stay for the incredible visuals.

Final Verdict: 7.3 – “Alien Bounty Hunter” #1 can be hampered by unfortunate plot decisions, but is ultimately a visually beautiful debut.