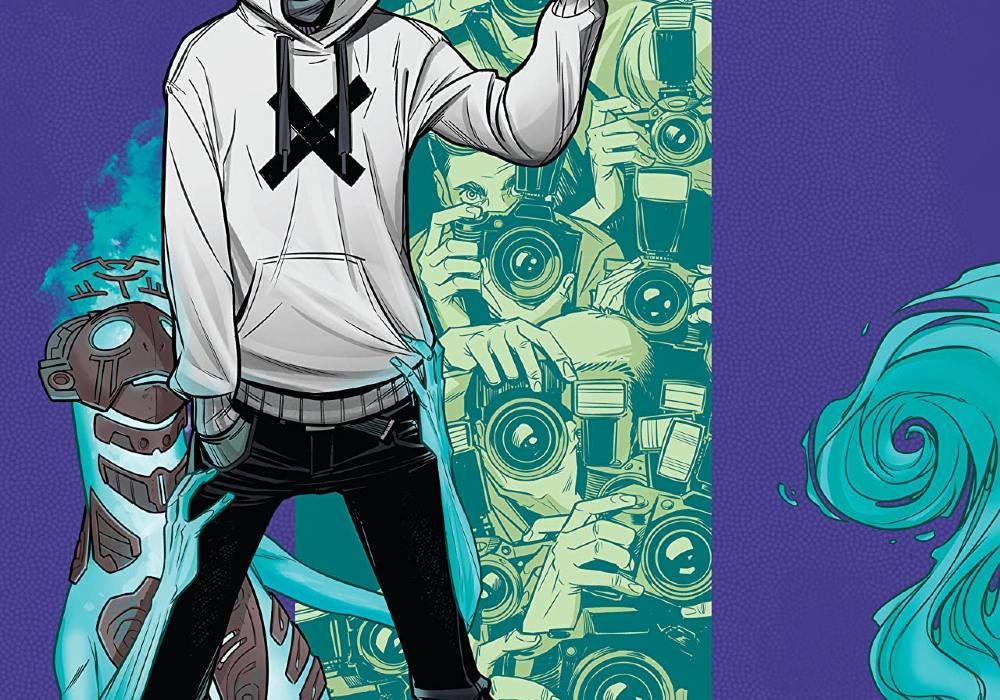 The penultimate installment of “Alienated” crackles with power. Spurrier’s writing commands the page. Wildgoose’s illustrations capture moments of pain and grace with equal strength. May’s colors set the mood–chaotic and anxious–while Campbell’s letters add character throughout. “Alienated” #5 is that rare comic in which the total story really is more than the sum of its parts, and the parts are all stellar in their own right. 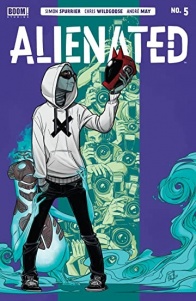 Everyone knows the consequences of absolute power – and the three Sams are no exception. As their different desires come to a head, the only thing that stands in their way is each other. And Chip’s deadly powers are in the center of it all.

In twenty some odd pages, Spurrier manages to push the story to new heights, digging in on the coming of age suburbia themes that have permeated the story from the start. What makes “Alienated” #5 so successful is that the themes of social anxiety are so finely tuned to the setting and our contemporary moment. For example, “Alienated” #5 is about more than high-school gossip and making it past the lockers in the senior hallway without getting a nuggie. “Alienated” #5 is about clout chasing, virality, cyber revenge, unhinged ego, and whatever socio-technological moment brought us the rantsona. And specifically, it’s about when a group of disaffected teens fall into an immense power that lets them cut through all that noise and be heard, for better or for worse.

One reason why “Alienated” #5 works, beyond the brilliant themes, is Spurrier’s ability to balance the story’s plot moments. On one side of the story we see Samantha and Samir, recovering from the repercussions of Samir’s actions in the issue prior. These moments are tense but tempered. The dialogue between these two characters is exceptional, as Samantha gently pries while Samir proves himself to have learned a profound lesson. The character development feels earned, and is satisfying.

On the other side of the story, Samuel reaches the apex of the white male exceptionalism that’s been building up within him since the first issue. Samuel is the opposite of chill, and the climax of “Alienated” #5 sees him hitting the perfect mixture of violence and ineptitude. It’s the stuff of tragedy. We can’t look away.

And then there’s Chip, the iridescent E.T. at the heart of the story, whose origins remain mostly unknown. What we do know: Chip bestows mind melding powers of shared memory, telepathy, insight, and when provoked, violence. The alien companion bounces between the Sams in “Alienated” #5, but it’s when Samuel twists Chip towards aggression that we get the most pathos, and the most personality.

It’s worth noting how masterfully Wildgoose characterizes and illustrates Chip. Whether coincidentally or not, Chip takes on a dybbuk like quality, unnaturally hanging over the shoulders of characters to whom he’s bestowing power. It’s eerie and jagged, but works well. Maybe the best way to describe it is that the Sams and Chip form a visually appealing yin-yang balance, shifting into one another in natural and unnatural ways that somehow, thanks to Wildhoose’s talents, don’t crowd the page. The visualization of Chip’s bond to the Sams is one of the artistic high points of “Alienated” #5. Furthermore, I’m happy to report that there are no artistic low points.

Lettering, often the unsung hero of comics, has an important role to play in “Alienated” #5. Campell’s lettering is most varied with Samuel, with fonts and letter depths shifting as his overbearing diatribes rise and fall. Chip’s dialogue, stilted given his alien childishness, finds a lot of character in Campell’s chiseled, almost pained lettering. It’s these minor details that push “Alienated” #5 from the territory of great to exceptional.

Where do we go from here? The world building and characters in “Alienated” #5 are so deep, it’s almost sad knowing that the miniseries will end with the next installment. Hopefully Spurrier and the rest of the creative team have enough time to resolve the remaining threads in the series. Of course, if they don’t, I know many of us would love to see the world of “Alienated” expand…

But we digress. As it stands, “Alienated” #5 shines. If you’re going to put one suburban, coming of age sci-fi story on your pull list this year, it should be this one. BOOM! Studios have done well for themselves.

Final Verdict: 9.4. “Alienated” #5 is exceptional. Brimming with life, terror, and swagger, nothing about this comic is forgettable.