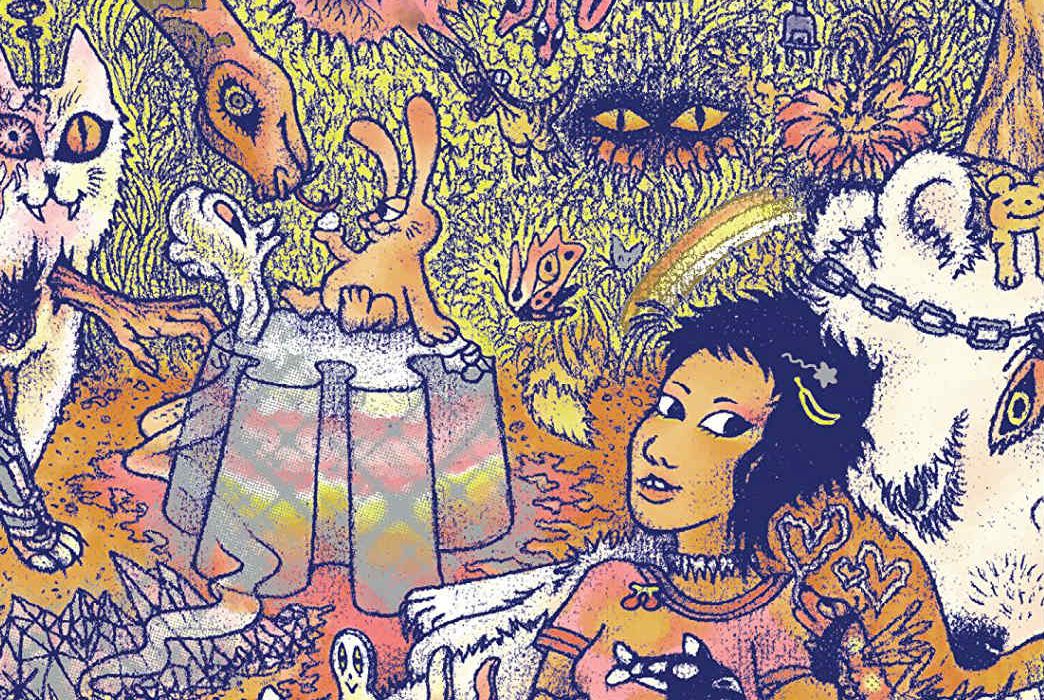 “Alienation” begins in a dystopian 2054 with a young couple watching an eclipse in Starbucks-sponsored virtual reality feed, since the smog is too thick to watch it in real life. It ends with a singularity escaping into the world. Along the way is a host of dystopian tropes, the future of always-on internet and virtual reality, a near-biblical pregnancy, and dead whales. 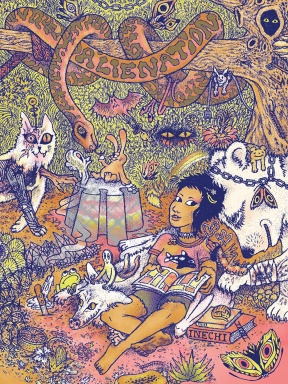 Written and Illustrated by Ines Estrada

Drawn in hazy gray pencil and printed in blue pantone ink, this book is about Elizabeth, an exotic dancer in cyberspace, and Carlos, who was just fired from the last human-staffed oil rig, attempting to keep their romance alive. When they realize that their bodies are full of artificial organs and they live almost entirely online, they begin to question what being human actually means. Do our ancestral, or even animal, instincts eventually kick in, or are we transcending the limits of our bodies? When an unplanned pregnancy is caused by an AI hack, Elizabeth must decide if the child is the next step in evolution ― or a glitch that will wipe out humanity once and for all.

Too many dystopian stories are too perfectly logical, extending the author’s one pet idea into a full story. Inés Estrada is closer to the futuristic stylings of Philip K. Dick, with an anarchist imagination that keeps the viewer off-balance. She’s not afraid of psychedelia, and doesn’t see technology as the pure enemy.

Alienation features a hodge-podge of issues typical to dystopian world-building: corporate branding, dense cities, workers learning they’re being replaced by robot via mass layoffs, movies in 4D, video game players being used as drone-controlling soldiers, food pills, Soylent food processors, and some very 80s-inspired themes like toxic waste and the end of oil. It also includes some new issues, like being forced to pay for information that other companies have on our own bodies, a topic that is woefully under explored in dystopian fiction given our current, ongoing healthcare apocalypse.

But most importantly, “Alienation” features the ability to escape from an unhappy reality into a virtual one, and the artificial intelligences that inhabit that online world. This is the dystopian feature that Inés Estrada wants to explore the most.

Eliza and her boyfriend Chinobi live in a curiously large apartment with empty rooms and less than the minimum amount of furniture. Food pops up from a container in the floor, and they spend most of their time in either augmented reality, or full virtual reality, using older model Googleglands, a bioengineered gland in their bodies that help simulate a full virtual experience. “Alienation” is full of this type of brand-name dropping. When they enter virtual reality, their barren life gives way to a dense world full of dreams and impossible creatures, and they almost never leave it. Instead of the perfectly arranged worlds in most virtual reality fiction, the VR in Alienation is almost hallucinogenic.

Inés Estrada lets her art spread into full pages for these lush tours through virtual reality. Most of the comic is in a very regular six panel grid, only breaking it for these few spreads, and a metafictional moment near the end.

“Alienation” is drawn and colored in a soft blue tones with dirty shading, like the world exists in a permanent dusk. The characters and places are all ugly, and it’s perfect. I love reading ugly comics, and I use “ugly” with more love than it’s ever been used. I love feeling that someone is pouring their heart straight onto the page, and drawing down every last reservoir of artistic talent to do so.

“Alienation” reminds of Orwell’s 1984 in one particular facet, the difference in generational viewpoints. Eliza’s Inuit grandfather saw the world fall apart, considers technology to be a colonizer, and doesn’t engage in non-stop escapism like his granddaughter. Chinobi’s mother is practically a fountain of family memory. The Luddite older generations are the only connection a friendlier past, but their kids aren’t too interested. Eliza and Chinobi were born into a world where the don’t have to feel bored or go offline for even a bare moment.

The name “Eliza” doesn’t come from the bible, it was the name of an artificial intelligence program form the 60s, one of the first. A romantic (like myself) could call it the Eve of AI. This small etymology leads to the next major theme in our dystopian comic: rape and pregnancy. The messy information floating through the comic collects itself, and impregnates Eliza against her will. Suddenly she’s a new, not-quite-Virgin Mary.

Eliza immediately starts thinking of terminating her “glitch pregnancy,” specifically with nano-abortion-bots (which sounds like an expensive overkill for an abortion procedure). When she finally verbalizes this desire in the real world, she hears the voice of God/Global AI commanding her not to, that her baby is the singularity. In a nice bit of comic book artistry, the voice appears alone in a white panel with solid text, emphasizing just how big this voice is to her. It’s not just a word balloon.

If you read back over the comic, you’ll noticed that she’s been watched and controlled this whole time. There’s an early visual theme of eyes and butterflies floating through her dreams, and storms keep conveniently keeping her from traveling.

“Alienation” is dystopian world building with technology inspired bacchanalia, and playing up all of it strong visual language and steady storytelling. Inés Estrada reminds me of all the great, high concept writers from Vertigo, who used comics as a way to download their brains and interests straight into everyone else’s heads. I loved those, and I love this.