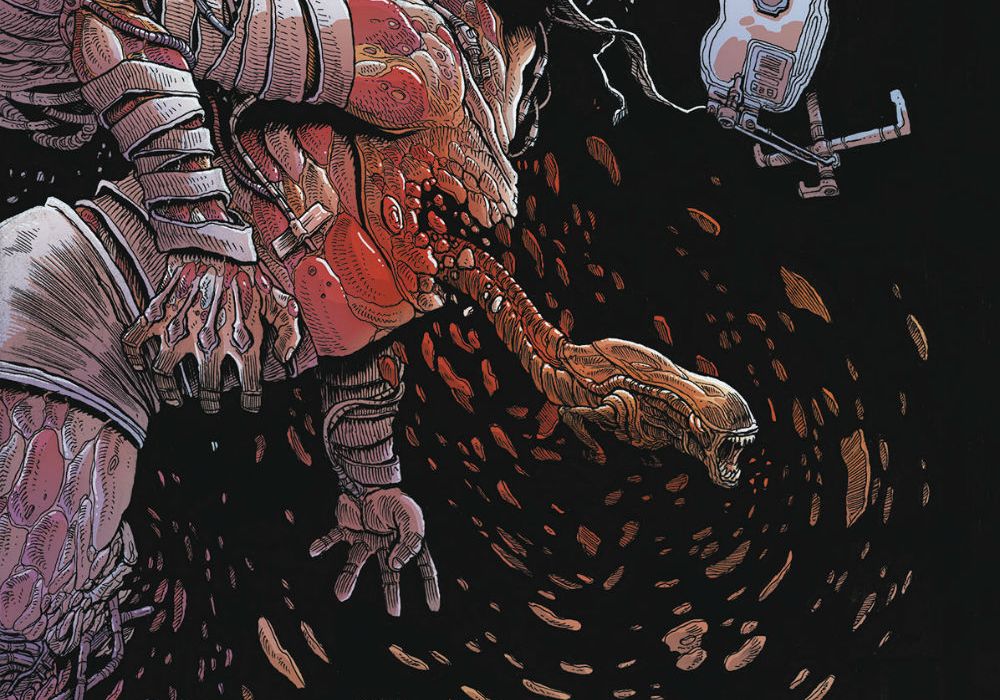 Seems like James Stokoe has got a couple things to get off his chest this week, as the second installment of his xenomorph mini-series bursts onto shelves. I hope you had a light lunch, because this one is bound to get messy. 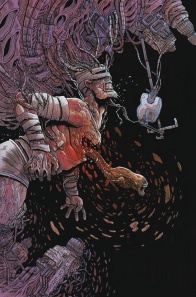 Having narrowly escaped the deadly xenomorph, Wascylewski moves around the hold of the ship, wary of his terrifying pursuer. His reflexes are tested again—but this time, by a sudden, massive breach in the hull. Will he survive?

There’s no time to even catch your breath: “Alien: Dead Orbit” #2 kicks off with a man barrelling away from the pitch blackness of his ship’s corridors. Wascylewski throws a hand out to the floor to keep from losing his balance as he careens around another corner. Stokoe captures the sprint with panicked accuracy – reddened cheeks look windburnt and air is spit out with loud, violent grunts. There’s not a moment’s respite until Wascylewski finally reaches the med bay and collapses in a heap. He’s alone – save for a lifeless body covered in a crimson-stained shroud and dripping blood to the ground in steady drops that seem to keep pace with the clock counting down on his watch.

This is the perfect atmosphere for an Aliens tale – the dread of being hunted, the fear of the dark, the inevitability of it all. Stokoe’s hyper-detailed, hyper-kinetic linework captures everything great about the franchise and drowns it in rich, bruised purples and bloody reds to enhance that unease. There might not be anything groundbreaking to this issue, but there doesn’t need to be when a comic book is this well executed. Stokoe doesn’t just hit the beats we all expect, he obliterates them with jaw-dropping intricacy. And while things might be a tad formulaic, that’s all part of the acid-dripping charm. The xenomorph is a force of extraterrestrial nature. We all know exactly what’s coming, and we all know that it really cannot be stopped.

Honestly, is there anyone who read the first issue, saw three emaciated bodies pulled from cryotubes and taken to Pylos station, and thought these three would end up as anything more than vessels for a chest-burst scene. No – hell, no. And that’s not at all a bad thing for “Aliens: Dead Orbit” #2. Not when Stokoe delivers a centerpiece that’s so drenched in frenzied, bloody grandeur that you’d be excused for putting the book down to check your own surroundings for stray bits of gory viscera that explode out of the page.

Stokoe’s toolbox seems limitless here. Sure, he holds nothing back during the two birthing sequences. His extensive hatching emphasizes how extraordinarily violent each seizure is and his minute detail-work catches one unfortunate soul grimacing hard enough to shatter teeth before the end. But he’s equally adept at reinforcing horror with the terrified faces of each crew member witnessing it all. These reaction shots are captured in tight individual panels looking down over the initial geyser of blood. Framed in this way, the separated faces seem to imply something of bloody bingo card, as it is this scene that truly sets in motion how these crew members will be stalked and picked off one by one by one, until we’re left with only Wascylewski.

And speaking of him, things just get worse and worse. Stokoe is a master at pacing an issue and this control ratchets the tension tighter and tighter. For the back half of “Aliens: Dead Orbit” #2, the peril is situational. In the grand tradition of the franchise’s retro-futurism, there’s crumbling infrastructure and dilapidated freighters. “That ship is a labyrinth of outdated systems held together with spit and tape,” a crewmate says, back when he was still alive. And Stokoe evokes every nuance of that description in dented bulkheads and debris. A space station in slight disrepair offers Wascylewski no safe harbor as it finally starts to splinter apart. A breached hull threatens him with the vacuum of space and ruptures capillaries in an eyeball that is very nearly sucked from it’s socket. It’s gripping and intense, without having to be overly bloody.

Really, that’s what’s so damned effective in “Aliens: Dead Orbit” #2: it’s the restraint Stokoe uses when it comes to the xenomorphs. Two issues in and we’ve basically only seen them twice. It seems strange to compliment Stokoe on his use of the less-is-more technique – aesthetically, he’s in the if-more-is-more-then-more-than-more-is-more school of art – but by limiting their presence, he’s able to keep that sense of dread in the ether. Since they aren’t over-exposed, there’s still the chance they’re hiding in the shadows, blending in with darkened pipes and hoses, stalking around every corner. And that is truly terrifying.

Final Verdict: 9.0 – Seriously, the chest-burst in this issue is so visceral, I half-expected some kind of 4D effect where the page would feel wet to the touch and leave a red-stain on my fingertips.