Abnett continues his run on Dark Horse’s ‘Life and Death’ series with a high octane assault as the Aliens enter the fray. 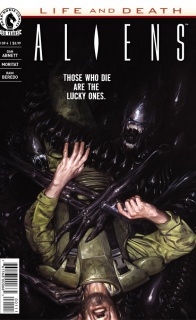 In the aftermath of the battle with the Engineers, the surviving humans on LV-223 are wounded and scattered—and easy prey for a gathering horde of Aliens!

The Colonial Marines get a taste of what it’s like to be at the bottom of the food chain!

Technically, “Aliens: Life and Death” is the first of a four part Xenomorph focussed miniseries. More accurately, it’s the ninth of the seventeen part “Life and Death” run that takes in Xenos, Predators, Engineers, and spans the gaps between all the movies that those franchises have spawned across the years. Safe to say, then, that despite the #1 billing, this isn’t necessarily a book you can just jump right into.

That being said, after a pretty exposition heavy contents page, Abnett doesn’t really make much of an effort to orientate readers as to the world they’ve arrived in. Set 40-something years after the events of the original Aliens film, this book nevertheless feels like a spiritual successor to James Cameron’s deep space Vietnam homage. Jumping straight into the melee after a botched attempt to steal an Engineer’s ship leaves the remaining rag-tag group of survivors split up and swarmed by Xenomorphs. As the book kicks off, the spaceshit has definitely hit the spacefan, and everything is pretty much space-FUBAR.

Abnett wastes no time unleashing a horde of Xenos on his cast of marines and civvies and there’s a nice balance struck between their range of reactions. This issue definitely feels like a hefty chunk of 80s hyperviolence has been channelled into the heart of it, and the resulting script is light on dialogue and heavy on grunts, groans, and screams, which translate with varying degrees of success from screen to page.

This narrative choice also means that the first issue is pretty sparse when it comes to narrative, feeling again very similar to Cameron’s slasher-movie-in-space aesthetic. Cast members are picked off and dismembered on almost every page, and the Xenomorphs really get a chance to show off a variety of killing techniques that display them in all their gory glory.

Which brings me rather neatly to Moritat’s contribution. Abnett’s dialogue light, action heavy script really leaves a lot of room for large, expressive art panels and Moritat makes full use of this. His muscular, lithe Xenomorphs are every bit as menacing as you’d want them to be, and there’s something in the simplicity of his style that harkens back both to the action packed books of the nineties and further, to the pulpy commando comics of the sixties and seventies.

The reliance on larger panels does mean that the pacing of the book feels slightly slow. There’s a sense that we’re getting a blow-by-blow account of events as they unfold. This works to an extent, but also makes the book feel as though it’s spinning it’s wheels a lot without actually getting anywhere. The constant combat (this book barely manages a page without adding to the bodycount) ends up ringing a little meaningless, and it’s in the quieter moments that you really add a sense of value to the carnage. One particularly believable exchange comes between jittery Jill and steady handed  Freebody, as the main body of marines beat a hasty retreat.

These moments are relatively few and far between however, and it would have been nice to get a bit more development alongside the dismemberment. As it is, this issue really only sets up two new plot points, and clears out a bunch of characters in true slasher style. Abnett has done a lot of EU work for multiple franchises, including lots of work on Warhammer projects and Doctor Who tie ins, and this project feels like something similar in terms of its accessibility and intended audience. There’s a sense of fan service and towing the line in the work that will definitely appeal to fans of the AVP legacy, but little new for people looking for an ‘in’ as far as the franchise goes.

Final Verdict: 6.2 – Fun and functional, this book feels nevertheless a little too formulaic to recommend to anyone beyond true fans.