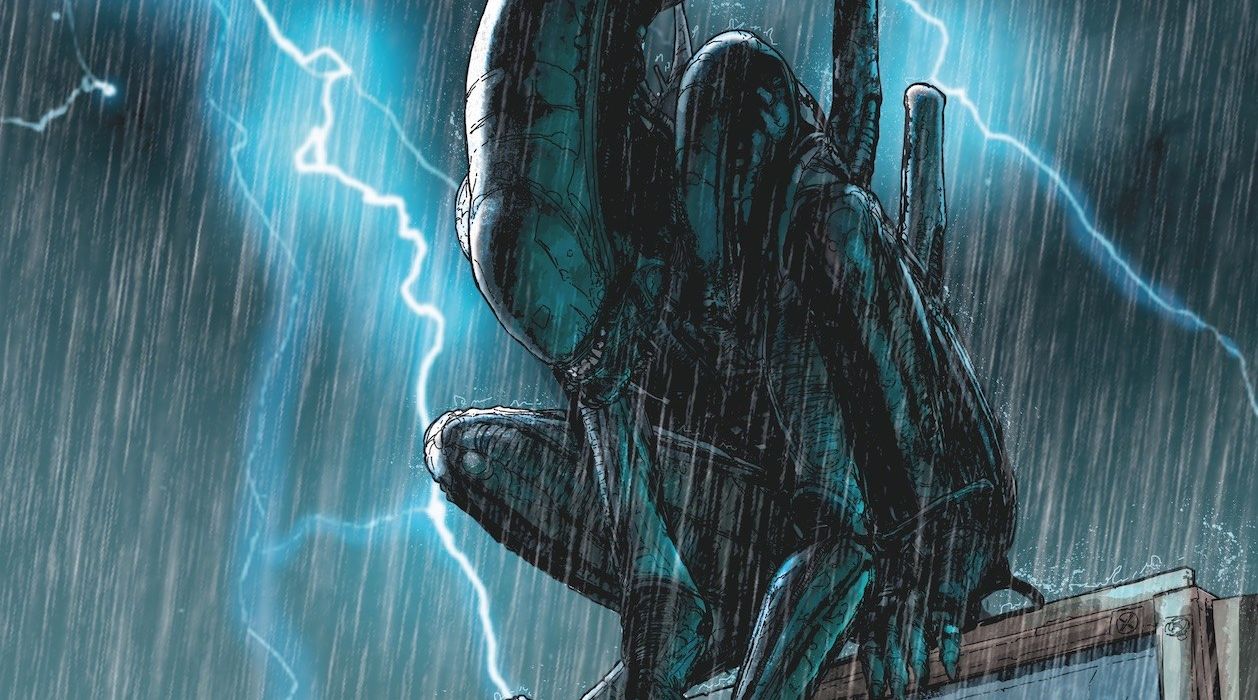 Have you been pining for a continuation of Amanda Ripley’s story from the great, but mildly frustrating cliffhanger of Alien: Isolation? Did you love “Aliens: Defiance,” but are dying to know what ultimately happened to Zula and Davis? Thankfully Brian Wood is here to give us some answers to both! 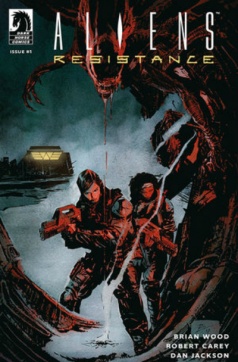 Written by Brian Wood
Illustrated by Robert Carey
Colored by Dan Jackson
Lettered by Nate Piekos of BLAMBOT
Three years after we saw both Amanda Ripley and Zula Hendricks, both women are on Earth simultaneously looking for ways to get answers about what happened to them in their separate, yet equally horrifying experiences, and move on with their lives.

Amanda is living in isolation in the great outdoors, all while trying to make her way through a bureaucratic maze to find out what happened to her mother and how it is linked to her own time being hunted by an alien on Sevastopol Station. Zula and Davis are living in the shadows, biding their time until they can properly expose Weyland-Yutani’s illegal and insane plans to weaponize the Xenomorphs.

This miniseries should be a priority for fans of Alien. As a sequel to two of the best additions to the franchise in any medium, “Aliens: Resistance” is already shaping up to be in league with its predecessors and we have only gotten one issue. Over the last 30+ years there have been quite a few “Alien” comics, some are very good, most are, at best, mediocre horror adventures. Brian Wood is one of the best things to happen to these comics. We finally have a writer who not only takes the storytelling seriously, but clearly knows the ins and outs of the property. Right from the first page, he treats this as the cinematic experience fans crave and deserve.

Wood continues to not only build up this world, but two of the best characters to ever spawn from it. Zula, his own creation, and Amanda are equally interesting and multi-layered characters who have compelling stories to tell and are people readers want to follow on the journey. Not since Ellen Ripley has this franchise had a hero that could rival her popularity and quality of a character, and now we have two. And since this series has always been one to focus on strong women, it is great to see these newbies carry the legacy, in more than just a last name or similar alien-fighting circumstances. With both characters are stronger than they know, overcoming physical hardships, near-death experiences and being made to feel less than they are; these characters are part of a new wave of fictional role models for the next generation of sci-fi and horror fans. While it is unlikely that either will make the jump to the big screen, I am hopeful the excellent quality will make newcomers reach for these comics and the Amanda-centric video games.

In terms of building better worlds, sorry couldn’t resist (So many puns!), Wood’s thoughtfully planned out, but quickly paced script throws in a lot of great little details surrounding the evil mega-corporation and their plans. In the past, the weaponizing of the aliens has always been left at that they were going to be trained(?) and turned into ground infantries. Here, we see some new war applications in effect, like acid blood-tipped bullets.

Robert Carey takes Wood’s script and rises to the challenge of balancing the words with the visual aspect. The first few pages are equal to film cuts; jumping between scenes, re-acquainting us with the main characters, leaping from past events into the current story, and jumping from setting to setting. Although the entire list of creators can be found on the inner cover, Nate Piekos sprinkles each name, as well as the “episode” title, throughout the first few pages, truly capturing the cinematic style. It is a perfect example of when a collaboration comes together in the best way possible.

There is a tendency with these comics to make everything look unfocused and choppy, adding to the action-based terror that tends to be the focus of each story. It is a style that never really comes across in any of the films, even the more frantic entries like Aliens or Alien: Resurrection. While Carey reaches that point in a few panels, he perfectly executes the stillness and crushing terror that overcomes many of the best moments in the films. Carey’s line work is gorgeous and takes on an American-manga style and the grittiness of the original Alien. His Amanda Ripley looks nothing like the established character design, but if that’s all there is to nitpick, there is nothing wrong here. His style actually changes from page to page and it works to facilitate the varied emotions and motives as the story moves forward and evolves. Dan Jackson’s colors are nothing short of outstanding. He makes this possibly the best looking “Aliens” comic ever. His lighting and layered tones push this book to the next level. As Carey’s line work changes, as does Jackson’s palette and way of making this a fully realized world. Every panel is a treat, with some being frame-worthy.

Being a sequel to two different stories, this is obviously not the intended jumping on point, however, Wood does such a great job catching readers up on what’s come before that starting here and going back to check out “Defiance” and Isolation isn’t necessarily a bad way to go about it either. This is a fantastic premiere to the story and fans should definitely be excited for what’s to come.

Final Verdict: 8.5, Exciting and fast-paced to the point of anxiety inducing, “Aliens: Resistance” #1 kicks off the miniseries in perfect fashion.