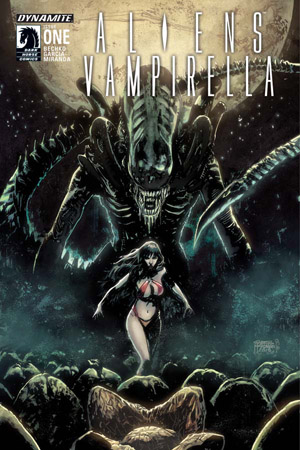 In space, no one can hear you suck. Ha! Can you believe that’s not the catchphrase for “Aliens/Vampirella”? Wait… yeah okay that’s a pretty loaded phrase. Uh, here’s a review of the first issue. Spoilers ahead! 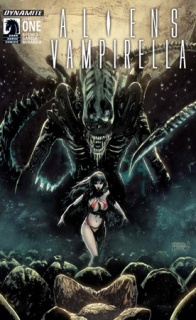 Humans have begun to colonize Mars, but something ancient and sinister got there first. Now Vampirella is faced with a mystery only she can solve, and the bloody realization that some monsters should never be awakened.
Writer Corinna Bechko says, “I’ve loved Alien since I first saw it as a kid on a crummy old TV in a well-lit room and got scared half to death anyway. Now that I have the chance to add a little corner to that universe I couldn’t be happier. And pitting such an implacable horror against Vampirella? That’s a meeting that definitely produces very fertile story-telling ground. The Alien franchise has always thrived with strong women in the lead. Smart, self-assured Vampirella is a joy to write for, even when she may have met her match.

I once had a professor who told me that you should learn something new every day. Take a detour from your day-to-day routine and really find out something you didn’t know before. That way, your brain won’t shrivel up and die before you’re 60. He taught drama, I should mention. Anyway, in researching the knowledge necessary to try and understand “Aliens/Vampirella” #1, I’d say I learned some new things. Some new things that killed my brain anyway.

“Aliens/Vampirella” #1 finds the titular vampire helping out a colony on Mars. Unfortunately, said colony has uncovered a tomb of vampires that need exterminating, which is why they called Vampirella for assistance. Already I have about forty questions. But before anyone can answer why NASA just has Vampirella’s phone number, or why there are vampires in space in the first place, H.R. Giger’s Aliens show up to kick everyone in their mouth.

There’s really something to be said for not bothering with any sort of exposition. A lot of stories suffer from hesitating to get to the point and “Aliens/Vampirella” doesn’t seem like the comic that needs a particularly lengthy preface. But there’s so much left unsaid regarding the colony’s situation that it’s a little distracting. No one so much as blinks at the fact that Vampirella’s a vampire, much less that MARS HAS A TOMB FULL OF THE BLOODSUCKERS.

Like I mentioned earlier, I did some research to try and make sense of this comic, figuring that space vampires were an assumed part of the Vampirella canon. That was half-right. Vampirella originally came from the planet DRAKULON, the vampire homeworld. Okay. But then Drakulon turned out to be a fantasy and Vampirella was actually the daughter of Lilith, the first woman who was cast out of Eden and mother of all demons. Eventually, Lilith made a mirror that made it clear that Vampirella’s origin story was just “Whatever”. So while vampires in space ARE a part of the Vampirella canon (a confused hallucinatory part conjured by a forgotten villain from the Bible) they’re still a part. Yet even then the vampires on Mars have nothing to do with Drakulon which only raises more questions about what their deal is. Gah. I just felt my nose bleed across four realities.

So, is “Aliens/Vampirella” #1 still a good comic even if thinking about it caused multiple synapses in my brain to shut down? It’s certainly not bad. Every character (including the immortal vampire somehow) are as boring as paint drying on C-SPAN. But while the human and inhuman element of the comic isn’t terribly interesting, the Aliens themselves definitely make up for it. Miranda-Garcia draws the creatures out, rather than springing them on the characters immediately. After a brutal encounter with some facehuggers, there’s even a particularly Freudian page that mashes up the Alien aesthetic quite nicely with some feral vampires. It’s not something that was really broached in this issue, but the concept of vampire necromorphs is something I would pick up the second issue to see. That, and to see how the incredibly bold cliffhanger is followed up.

“Aliens/Vampirella” #1 is a comic I really do want to like. Both characters seem like they mesh pretty well together and, as someone whose favorite comic of the year thus far was “Archie vs. Predator”, I’m the last person to bash something for being an over the top crossover. Unfortunately, a lot of the book’s details feel pretty undercooked. The beginning feels incredibly rushed and there’s practically no justification as to why anything is happening. If “Aliens/Vampirella” can take a few seconds to explain what’s going, those unanswered questions might stop distracting me from the really cool vampire/necromorph crossover that should be happening. I’m not even asking for much. Just give me a page of Vampirella saying something like “vampires have lived on Mars for hundreds of years and that’s where I came from.” I’m not looking for Dostoyevsky here.

Final Verdict: 5.3 – “Aliens/Vampirella” is a rich kid that’s really eager to get into its Christmas presents. Unfortunately, it rushed down the stairs, tripped, and landed on its new puppy, crushing it to death. It has everything it could need to provide a great story, the creators just need to focus on providing a solid reason for what’s happening.