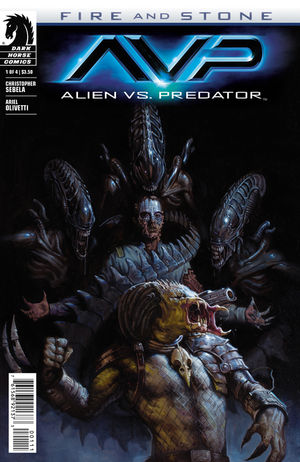 For years, Aliens and Predators have fought tooth and nail over comics, movies, and a video game I really liked in fifth grade. With the latest series of crossovers from Dark Horse, the players of the 2012 film Prometheus get in on the action. And just as it was for Prometheus, I have no idea what’s going on. But I’m digging it. Check out our review below but be wary of mild spoilers. 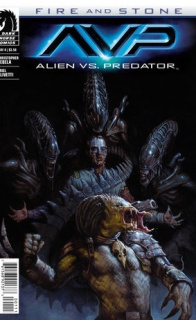 As the mercenary crew of the Perses leave the horror of LV-223 behind them, one passenger reveals a terrible new danger, and the crew soon find themselves in a deadly struggle between predator and prey!

* The Prometheus crossover event heats up!

* Art by Ariel Olivetti (Cable, Conan and the People of the Black Circle)!

I’m going to admit straight up that I dove into “Fire and Stone” blind. Apparently, Dark Horse has been running a crossover between all the “AvP” franchises which now includes Prometheus in addition to the Freudian nightmares we’ve already seen tear each other to pieces. From what one can gather from “Fire and Stone”, the Prometheus angle is frustratingly vague (like the movie) but offers some compelling new elements to the AvP universe (unlike the movie).

Back in the previous “AvP” series, according to two minutes on Google, there was an artificial life form named Eldan (who I’m assuming is something similar to Michael Fassbender’s David). Something happened in those books I should honestly take a crack at, and Eldan is now organic, his muscles exposed, carapaces poking out from his back, and diseased warts covering what skin he has. Our first introduction to Eldan is him sitting on a throne with several Aliens waiting at his beck and call which already establishes him as the most baller character in the “AvP” universe.

I’ve never been a fan of attempts to humanize the Aliens and turn them into anything besides mindless penis monsters but Eldan is definitely a terrifying enough figure to act as their voice. Having the Space Marines™ deal with the aliens while a voice, a voice they have a history with, only adds to the terror of the whole situation.

Speaking of terror, Ariel Olivetti’s softer style adds a warmth to “Fire and Stone” that is downright uncomfortable. Though the figures can feel static at times, Olivetti still does a lot with the panel layout to make for some visceral storytelling. One particular scene showing a scientist’s encounter with an Alien’s tongue is fantastic in the simplicity of its execution (pun retroactively intended). The real appeal of Olivetti’s art, however, comes from the details. Eldan is a truly horrifying figure to behold and his presence as an utter monster. Some of the other characters, like WhiteBro McProtagonist, seem a bit more cookie cutter but I can’t emphasize enough how great a villain Eldan is.

Also, the Alien rifle WhiteBro steals somehow manages to outphallus an H.R. Giger creation so props to Olivetti for that accomplishment.

Of course, there’s more to “Fire and Stone” than the Aliens and Eldan though not much. The Predators are there and that’s honestly the most I have to say about them. They show up because they’re in the title, fight some people, and then just get in the way of the humans vs. Aliens plot. That said, there’s still some nice non-linear storytelling going on to explain their place in the conflict but it does little to make the Predators seem relevant. Sure, they fight off the aliens so the useless humans don’t die but other than that they don’t bring much to the table.

Is the solution to allow Eldan to murder humans for a few issues? Yes, but at least the Predators don’t sideline the issue completely. The look into their intergalactic adventures at the beginning is a great set up for what’s to come in future issues, even if there’s not much pay off here. And still, Eldan going around and basically wrecking everyone’s lives is a scary enough story to make the book worth checking out.

Like I said earlier, I’ve been a casual fan of “Aliens vs. Predator” for a while and pretty much expected this comic to be the same old. I was delightfully proven wrong by the implementation of Prometheus concepts, as vague as they may be, but some vestigial aspects of the typical “AvP” formula are reluctantly present. I can’t say that I completely followed what was going on in this issue, but it did pique my interest enough to check out the previous Dark Horse series so I can follow along for the rest of the ride.

Final Verdict: 7.8 – “Fire and Stone” brings a new dynamic to the Necromorphs that make for a pretty scary read, even if the Predators have to show up and bro out while kicking skulls in.