The flagship title of Marvel’s All-New, All Different outpouring is certainly both new and different. But, with so many fresh team-ups littering the post Secret-Wars landscape, how does Earth’s newest collection of mightiest heroes shape up? 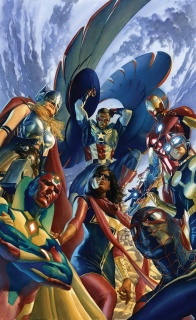 The Avengers are dead–long live the Avengers! Earth’s Mightiest Heroes–Captain America, Thor, Vision, and Iron Man–are living separate lives, not tied to any team–but when a threat from beyond the stars targets our world, fate draws them together once more, alongside Nova, Ms. Marvel, and Miles Morales a.k.a. Spider-Man!

When the initial artwork for Marvel’s All-New, All-Different line-ups started dropping, none of them filled me with more excitement than Alex Ross’ instantly iconic image of a team of Avengers that most of us could never have seen coming. Ross’ usual epic stylings rendered a team, many of whom are still fledgling heroes settling into their roles, as near demi-gods (alongside one actual demi-god. Shout out to Jane Foster). It felt, to me at least, as though this was the team that would lead Marvel into a new era, and that they’d be heading the charge with a group of fresh, diverse and contemporary new heroes with new exciting stories to tell.

As a first issue, “All-New, All-Different Avengers” certainly ticks most of the boxes necessary for success but, given the hype of Marvel’s brave new world, I can’t help but feel it falls short of the greatness promised by its fantastic front cover.

The book is split into two parts, and we get a chance to meet almost, but not all, of the line-up spread across the two stories. The primary storyline features Sam Wilson’s Captain America, an Avenger-less Tony Stark, and Miles Morales in an unexpected team-up. Tony and Sam bump into each other during some routine inner-city heroics and discuss the distinct lack of real Avengers teams during a routine fly-by past the now re-purposed Avengers Tower. They’re distracted by an explosion that heralds the appearance of a vengeful Chitauri Warlord who appears to be more than a match for both the seasoned heroes and Morales, a spider who happens to be in the right (or wrong) place at the right time.

The story, while cohesive enough, feels a little by-the-numbers, with Sam’s initial street-level traffic-pile up and consequential politically-charged civilian exchange taking up more of the narrative than feels necessary. Waid’s scripting feels natural enough, but he doesn’t offer up much more than surface level conversation between Tony and Sam, intercutting their light, breezy narrative with an almost moustache-twirling level of mysterious bad guy. This whole section reminds me of a modernised Golden Era book, with such obvious right vs. wrong characterisation that the storyline could easily boil down to ‘punch the bad guy/protect the innocent bystanders’.

Kubert’s art is what carries the first part of this book for me. His dynamic art gallops along, and his panelling is inventive enough to flit between conversations in cars and high-impact laser assaults and switch gears accordingly. He manages a balance between the detail oriented and the bombastic that gives this story a really confident sense of suspense and pace.

The second half of this book, a back-up story featuring Ms. Marvel and Nova, definitely interested me more, even though the story feels largely detached from the main narrative. Narrated by Kamala and Sam simultaneously, Waid juggles the two youthful heroes as they cross paths tackling a mega-sized beast from the Microverse. Their confident heroics are contradicted by their faltering inner monologues, each more worried about how they’re coming across to the other hero than about the monster itself (which they dispatch with relative ease). It’s a fun, relatable teenage story about how difficult it can be to read other people. Asrar’s poppy art is perfect for this story. His glossy, Kaiju-esque beast is a fantastic opening monster that gives readers a chance to see the different physicality of our two heroes. But it’s when they finally get face to face that his art really shines. The deftness of his micro-expressions makes for a truly awkward exchange between Sam and Kamala that is funny and tense in equal measure.

My only problem with this second half story is that its inclusion feels as though it’s stealing pages from the ‘main’ narrative. It is a cute interaction that could easily have slotted into either character’s solo books as the beginning to a team-up, but it hardly lays the foundations for a team that will be one of the defining pieces to this All New universe.

For me, much of what makes this book good is also what stops it from being amazing. Waid’s storylining in the first half is professional, but hardly ground-breaking. The characters are recognisable, but nothing about them feels different enough for me to need to re-engage with them in new ways. The decision to split the book does mean that we get to see more of our Avenger teams in their natural habitats, but it does leave the first (and most important, despite the fact that I preferred the second one) story feeling a little light on substance.

Even the ending, a fight that leaves our two most experienced All-New, All-Different Avengers down but not out, feels a little well-worn. When this week also sees the release of inventive and experimental titles like “Illuminati’ and ‘Ultimates’ that play with the reader’s expectations and mix up groups of heroes and villains in truly new, nuanced ways, I can’t help but feel this book still has a way to go before it can be counted amongst the best new books Marvel are putting out.

Final Verdict: 6.9 – Confidently constructed, but a little too safe to earn the title “All-New, All Different”.