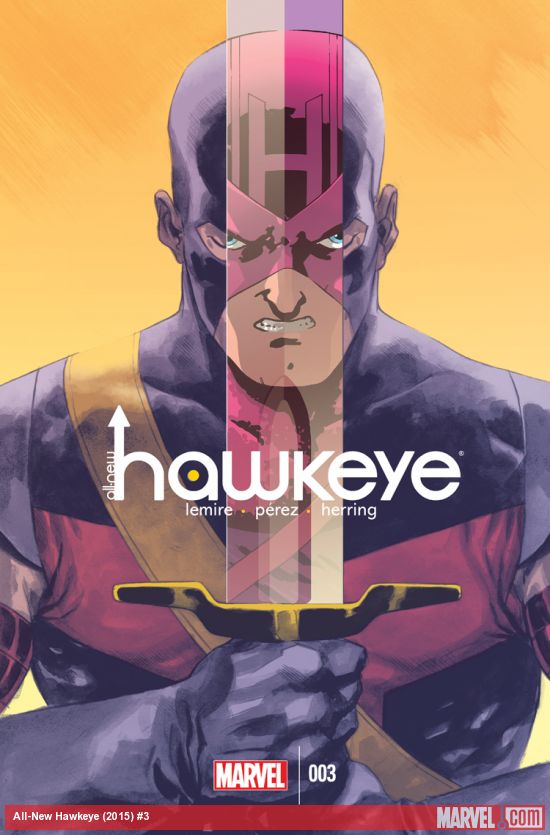 The Hawkeyes escape from the 1248th secret Hyrda base with the confiscated weapons of Project Communion, aka three little kids, into the safe confines of a S.H.E.I.L.D. helicarrier, but it doesn’t look like the purple duo will have much of a break before having to ditch their government babysitters. 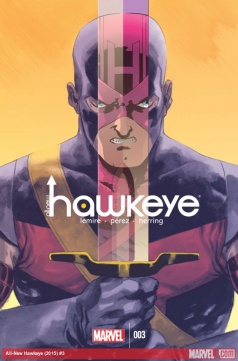 • What makes a hero and what breaks a hero? Hawkeye and Hawkeye experience both. In ONE GLORIOUSLY BEAUTIFUL ISSUE!
• Jeff Lemire and Ramon Perez bring you the hotly anticipated series of the season.

After spending some time apart recently, it’s great to see Kate Bishop and Clint Barton together again. The archers have come back to team up and take on a secret Hyrda base, and only to find that they have once again been misled by S.H.E.I.L.D. and their handles. Given their lack of superpowers, Clint and Kate have always had a unique perspective on the Marvel Universe, and the similarly unique minds of Jeff Lemire and Ramón Pérez seem to know just what to do with these characters.

The first two issues of this series featured plenty of great Clint and Katie banter, but here Lemire starts to dig below the surface and explore what exactly it is that sets the Hawkeyes apart. In Lemire’s hands, Katie is an optimistic do-gooder, always ready to do the right thing. Clint, on the other hand, is the world-weary veteran superhero who has fought more than his share of battles and has the scars to prove it. He will still do the right thing, he’ll just be a little more stiff and gruff while he does it. These descriptions are broad strokes, of course, and Lemire is much more subtle when highlighting these differences. All it takes is for Clint to pause and mumble something about “$#%* sidekicks” to know that he sees the world from a very different perspective than the younger archer.

Given that this story features evil scientists, mutated children, mysterious childhood memories and treacherous good guys, the tone never gets too dreary or heavy handed. Lemire isn’t afraid to introduce real stakes that pack an emotional wallop, like evil experimentation on children, but he doesn’t rely on this to create a foreboding atmosphere. The issue feels like a fast-paced adventure, without making the supporting characters and their story feel inconsequential. In this series, things can still matter even when the characters make a wisecrack about them.

Lemire’s dialogue driven character development walks hand in hand with the expressive art of Ramón Pérez. The emotions that play out on the faces of Kate and Clint tell the reader almost as much as the dialogue. Kate just has to send one steely-eyed glance Clint’s way for him to understand exactly what she’s planning. Likewise, his hesitation to launch a rescue of the kids, which could be seen as incredibly cold and uncaring, is visually shown to originate from a place of sadness and quiet desperation. Clint knows that doing the right thing doesn’t always work out, and this weariness shows on his face.

One of the key components of the previous “Hawkeye” was the critically acclaimed artwork of David Aja. It was different than anything else found in a currant Marvel book, and created the singular tone of the series. Pérez has maintained a similar visual style for this series, one that features fewer, bolder lines at the expense of hyperrealism. Pérez is careful not to simply copy Aja, and he adapts the look to one that emphasizes his skills. He’s not trying to mimic the previous artist, but rather continue the series reputation for presenting a clear alternative to the familiar appearance of other superhero comics.

Pérez is able to juggle the mix of lighthearted moments, integration scenes, and fights with impressive ease and the scenes never feel disjointed. As result, it doesn’t feel weird to see Kate smash an assailants head into a wall, leaving a streak of blood, followed a couple pages later by the eagerly wagging tail of Lucky the dog as the team arrives home.

The versatility of Pérez’s art really becomes apparent with the continuous flashback to Clint’s childhood that runs across the bottom of every page in the issue. Here, Pérez trades in his pencils for a paintbrush and creates gentle and lush water-coloured images that mimic the haze of decades old memories. It’s really impressive to see the detailed figures during the big fight scene compared to the foggy outlines that appear just below. During the first two issues, the flashbacks were closely linked to the moments that were occurring in the present of the story. That link becomes a little less exact in this issue, but the images that Pérez creates are still quite captivating, and function perfectly well as their own storyline.

Tasked with following up a critical acclaimed run that revitalized its titular characters, Jeff Lemire and Ramón Pérez have moved quickly to apply their unique sensibility to the world of Clint and Kate. Lemire’s story is fast-paced, emotional and entertaining while he explores both the similarities and differences between the two Hawkeyes. Pérez continues the recent artistic tone and tradition of the series, being sure to add his own style along the way. The creative team is only halfway through their first story-arc, but they have ready demonstrated a very strong grasp on Clint, Kate and the unique way that they view the superhero world.

Final Verdict: 8.5 – A great issues from what’s shaping up to be a great run. Jump on-board while it’s still early.