As ‘Rebirth’ continues its roll-out, we come to what is generally considered the most anticipated book of the relaunch, Scott Snyder returning to Batman alongside a plethora of artistic talent to showcase Batman and some of his most iconic villains. How does the first issue fair? Let’s take a look! 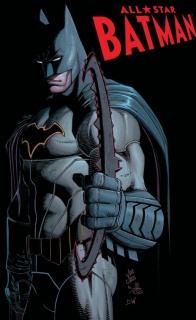 “My Own Worst Enemy” part one! Superstar writer Scott Snyder explodes into an all-new Batman series alongside legendary artist John Romita Jr., reimagining some of the Dark Knight’s greatest villains. First up: Two-Face! Batman must take Two-Face to a destination out of Gotham City, but the duplicitous villain has a two of spades up his sleeve. Every assassin, bounty hunter and ordinary citizen with something to hide is on their tails with one goal: kill Batman! Handcuffed together on the road to hell, this is Batman and Two-Face as you’ve never seen them before!

You think after fifty plus issues Scott Snyder would be done with ol’ Batsy. Well, you are wrong. As Snyder joins with John Romita Jr., Danny Miki, Dean White to depict perhaps the most unconventional Batman story that we’ve seen in main continuity in quite a while (yes I’m including the Ro-Bat thing!). Most of the stories have taken place predominantly in Gotham. Now it’s just Batman, Two-Face, an eighteen wheeler, 500 miles of American Heartland and a load of people who want to stop them from reaching their destination. And I got to say: It really really works! With the occasional hiccup that I’ll get into.

Now, I have said in the past that, while I respect the hell out of Snyder’s run and consider “Zero Year” one of my favorite Batman stories, I always had a kind of dissonance with how he writes Bruce. It’s just a matter of different interpretations (something I’ll get into when I talk about the backup) that always made Bruce seem a bit off. That being said: One of my favorite things about this opening is something that it shares with its sister series “Detective Comics”. It’s that Bruce is showing empathy for his enemies. He wants to try and rehabilitate and redeem them. In the case of this book, the journey that he and Harvey Dent are going on isn’t about moving Dent to a more secure location, but for a hope to get rid of “Two-Face” for good.

But that wasn’t the only aspect about Bruce I was liking. Snyder is showing now a lot better handle with tone balance, allowing for some great levity at times. We have a Batman that winks in this issue. I would not expect to see that in “Court of Owls” Batman. Snyder may also be showing some self-awareness as well, shown when he is throwing down with Killer Moth and Firefly, giving Killer Moth some “fun facts” about moths which, once upon a time, would be a much larger historical information dump. It’s a lot more nimble and quippy here, and all the better for it. These moments of lightness does help sell some real grim things, especially in the backup.

Speaking of grim, what Snyder really flourishes with is the villains. In this case, Snyder is bringing that examination to Two-Face. This isn’t a Two-Face that is using “two” gimmicks but it is a Two-Face that takes a larger look at the idea of the faces we put on. The face we show to society and the face we hide. It is Big Bad Harv’s belief that, underneath the veneer, we are all rotten that mirrors so wonderfully with the aforementioned Bruce fully believing he can save Harvey. There’s a lot of looks at social media and the inter-connectivity and globalization of society in discussion here (which, if you think on it harder, could also be a commentary of the Big 2, these caretakers of beloved icons, still giving work to known harassers) as Two-Face’s true escape plan is revealed here and provides with quite an interesting cliffhanger.

John Romita Jr. is a legendary talent; part of several celebrated runs throughout the last several decades. Here’s the thing: I was never really a big fan. I was severely put off from Geoff Johns “Superman” run a year or so ago because the artwork wasn’t working for me. That being said: Wow! I have to say I’m much more impressed with the artwork this time around and I think I know why. They found an inker and colorist that can really bring out better quality to the pencils. Where I found the art in “Superman” malformed, Romita, Miki and White provide a sharper, way more dynamic page. The details don’t feel like the blur together and the colors! The countryside looks so good and tranquil just before the chaos ensues.

This brings me to the full design of Two-Face himself. Now, at first, his suit kind of disappointed me. What can I say? Was always a sucker for the black-and-white suit. It wasn’t until I thought about how the color scheme works here. It’s a red suit with black shirt. All the underlay is black. It ties into how this interpretation of Two-Face is less about two sides of the same person, but one encompassing the other. And the attention to the detail work of the tendons and scarring of Dent’s face is so creepy, it actually looks like it’s made of meat.

That said, the one downside is the designs of some of the lesser villains out to get Bats and Two-Face. Firefly and Killer Moth’s designs are kind of forgettable. I know some had problems with Moth’s design in the Lemire/Sorrentino “Green Arrow,” but it was a bit more unique than this.

But that’s just the main story. The backup story, “The Cursed Wheel Part 1”, is where Declan Shalvey and Jordie Bellaire take over art duties and focus shifts to Duke Thomas, a character introduced in “Zero Year” and becoming more and more embroiled with the heroes of Gotham. And I got to say, I like Duke a lot in this, mostly because this feels like the most he has done in quite a while. He’s been in King/Finch’s “Batman” but felt like he had little presence. Now, we get to see him right in the thick of it and I have to say, I like that this wasn’t an action-heavy story. It allows us to see how Duke thinks, his doubts at times and how he operates.

Having said that, I had an annoyance with Bruce in this backup and it kind of pertains to my differing interpretation from Snyder. The line in here is Bruce saying to Duke: “Batman doesn’t need a Robin”. There are two things that bug me about this. First is the continuing insistence that Batman is a loner…which let’s face it, is crap and has been since “Detective Comics #27” so long ago. My second problem with it is that he’s saying this to Duke, who, as much as I like him, when you break it down, is kind of filling that same Robin role in this book (he’s dressed in yellow, for goodness sake!). Combine this with a bit in the main story where Bats says to Gordon about how he’s “trying something new” in regards to Duke where it doesn’t really seem like anything that new. Again, I don’t have knowledge of the long-term goal, but this comes off as being really lacking in self-awareness, especially considering some of the cheeky winks I talked about.

Declan Shalvey and Jordie Bellaire are an inseparable artistic duo and they continue to dominate here. Taking place in a fabric warehouse just allows Bellaire to show off a wide variety of tone to juxtapose with the real grim scene of a crime that will be the centerpiece of these backups as well as the use of negative space throughout. And that last panel: Wooh. Despite the fact that it really isn’t that gory but it is a disturbing scene, almost to a “How is this book a Teen+ book?” level.

Final Verdict: 8.4- A well good book. If you don’t get it in singles, then I highly recommend checking it in trade.