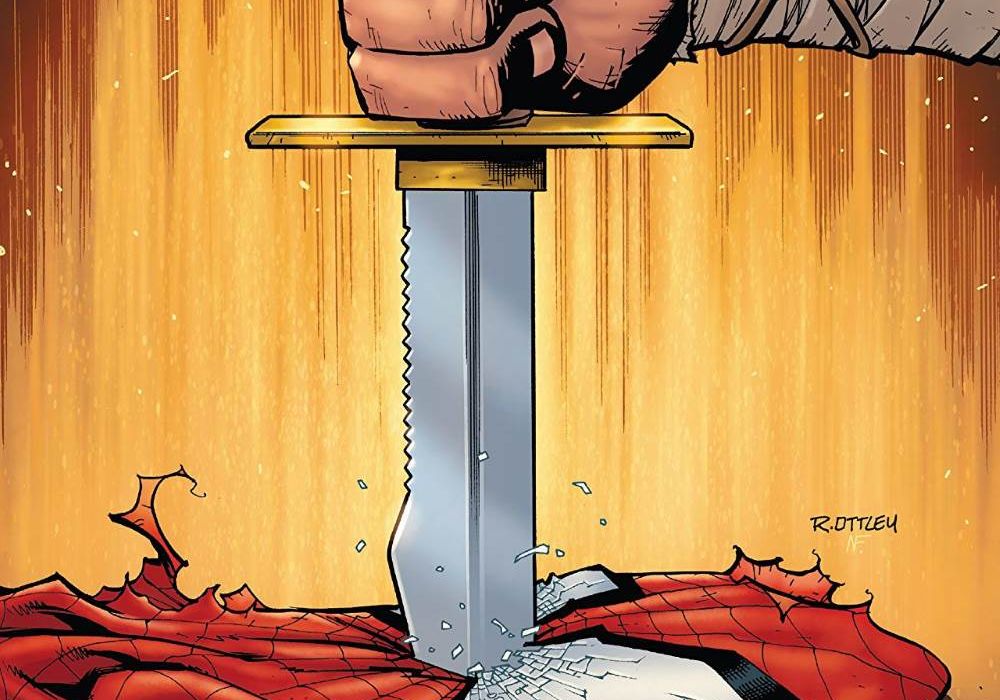 A lot of people forget this fact because of ‘Secret Empire’ but… Nick Spencer writes good comics. His characters, plotting, pacing, he does it all like a pro. That doesn’t mean he always knocks it out of the park, but there’s an admirable focus in his creative intentions. That’s very apparent in “Amazing Spider-Man” #23, the conclusion the the ‘Hunted’ storyline. It’s impossible to talk about this issue without spoiling the rest of the story, so consider this a spoiler warning for ‘Hunted.’ But suffice to say- issue #23 is a microcosm of the whole series, both good and bad. 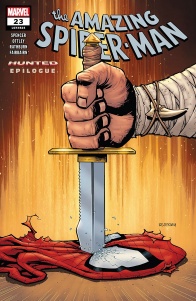 The fallout from “HUNTED” is felt and much of Peter’s life is called into question. What is left of Spider-Man after living through the harrowing hunt?!

It was pretty obvious when we were introduced to the young powerful clone of Kraven that he would take up the mantle of the Hunter by the end of the storyline. And behold, that’s exactly what happened. In a fun and surprising callback to ‘Kraven’s Last Hunt,’ the old hunter put on the black Spidey suit and goaded his clone son in to killing him. It was a shock, and this issue opens with a haunting four page cold open. And those four pages are just masterfully done.

Now, you can give most of the credit to Ryan Ottley, who is just so perfectly suited for this book it’s kind of crazy. Ottley’s style is almost as cartoony as “Spider-Man” mainstay Humberto Ramos, but unlike Ramos’ Saturday morning style, Ottley brings an element of sensuality to his artwork. In this case, the sense of despair. At the funeral, you can practically smell the rain and grave dirt. When young Kraven clenches his muscles and starts to cry, that physical sensation of tension leaps off the page in gets into your very muscles. It’s good cartooning is what I’m saying.

But I also want to take a moment to compliment Spencer. I’ve always maintained that it takes a certain wisdom to get out of your own way as a comic book scripter, and this sequence shows remarkable trust and restraint. The rest of the issue lets us get back into Peter Parker’s inner monologue and eventually, a letter from the deceased Kraven the Hunter, but these four pages are just so perfectly executed, they remind you why Spencer keeps getting work, and how good most of that work is.

The rest of the issue is an epilogue that bounces from story to story. Some of it makes the world of Spider-Man feel really big, and connects it to the wider Marvel universe. Some of it reminds you how much ‘Hunted’ dragged in some places. The scene of the Avengers rounding up the bad guys is another great opportunity for Ottley to show his stuff. (I freaking love how he draws Thor and She-Hulk, more of that please). We also get teases for future storylines, including a Vulture-led evil team, the Savage Six (made up of Vulture, Rhino, Scorpion, Tarantula, King Cobra, and freaking Stegron!).

The beats for the smaller characters are among the issue’s highlights and low points. One of the most pleasant surprises in this series has been the twisted friendship between Taskmaster and Black Ant, and that continues to be wonderful here. I can’t wait to see that duo show up to menace heroes in all sorts of books. But the Black Cat and especially the Lizard stuff was the weakest element of ‘Hunted,’ and when those guys were on the page, the book just dragged to a halt. Too little story stretched over too many issues with those two. Nothing they did here was any different from anything they ever do. I’m much more interested in Vermin, and that dude was only in two or three panels in this whole issue.

This issue also teases the centipede/demon themed villain who has been lurking around the edges of this series since Spencer and Ottley took over in issue #1. And I am good and teased. Fans of Spencer’s older work in series like “Morning Glories” know that he can weave a mystery, and everything about this figure has me desperate to pick up the next issue. Is it going to be a familiar foe? A brand new villain? A deceased character clawing their way out of hell? A completely new element to the Spider-Man mythos? It’s a great hook, classic “Spider-Man,” and it works wonders here.

The final sequence returns us to the younger Kraven and sure enough, he inherits his father’s mantle, assuring that we return to the most basic of status quo. Kraven the Hunter is a villain again, he’s young and mean and not burdened by a half dozen resurrections and curses. But in knowing that superhero comics return to that middle point, it’s important to own that fact to make the journey fun. And ‘Hunted’ mostly succeeded, especially for its central figures, Spider-Man and the Kravens. Vulture, Black Cat, the Lizard, and Billy Connors all dragged the story down, but surprise favorites like Taskmaster, Black Ant, and Arcade acted as a good balance. I don’t know if ‘Hunted’ will be as classic as Kraven stories of the past, but Spencer and Ottley assuredly are quality comics craftsmen.

Final Verdict: 7.8 – not every character is equally interesting but some good pacing from Spencer and some masterful cartooning from Ottley make this a fun read!