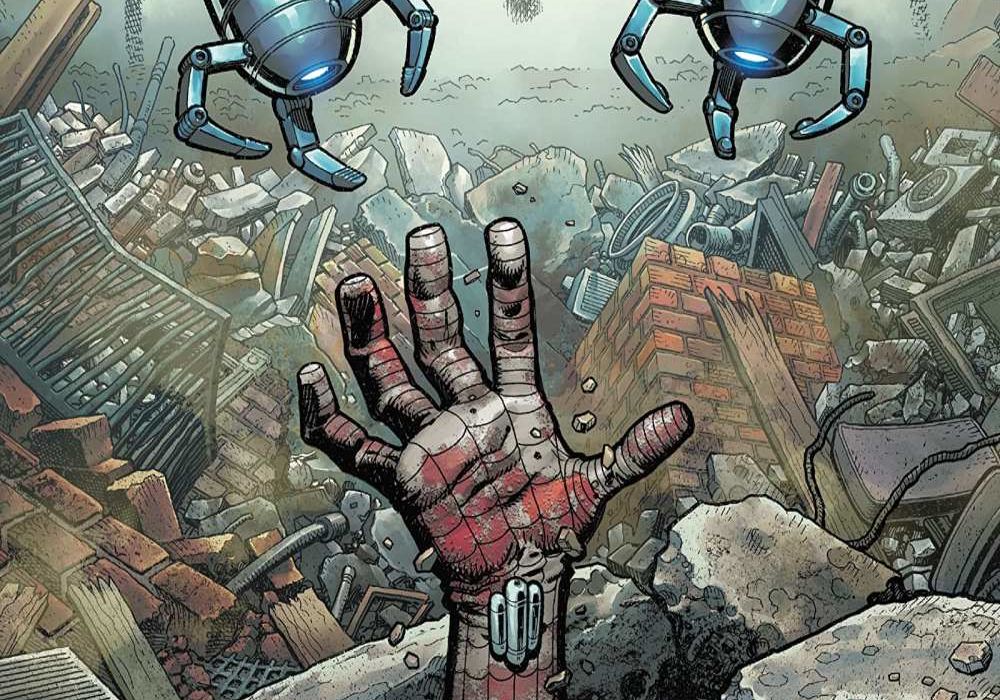 If you told me, a lifelong Webhead, that we were going to put Peter Parker in a coma and focus on Ben Reilly, I would have called you crazy. I lived through the ‘Clone Saga’ years, and I am happy to leave Ben in the past as a piece of weird trivia. I never would have thought that could be one of my favorite Marvel books. I also would have told you that switching writer’s every couple of issues is a terrible idea. I would have been wrong there too. The ‘Beyond’ era of “Amazing Spider-Man” is a blast, and issue #85 keeps the story moving at breakneck speeds. Oof, or maybe it’s still too soon to use that word. 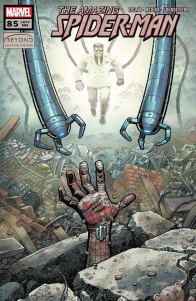 DOCTOR OCTOPUS VS. SPIDER-MAN AT BEYOND HQ! It’s going to take everything Ben Reilly and the company that backs him has to stop Otto Octavius. But, in the Merry Marvel fashion and as with all respectable Spider-Stories, even if Spider-Man wins, he is going to lose. And he is going to lose BIG.

Ben Reilly is Spider-Man, an employee of the Beyond Corporation, who first appeared in “Nextwave” and later menaced the heroes of Al Ewings “Ultimates.” They are shady mad scientists with a love for the surreal. And they are the new Spider-Man’s support system, constantly telling him to skip saving civilians in favor of protecting corporate secrets. And it turns out, they are perfect for a Ben Reilly story.

At his core, Reilly is always going to be a clone, a substitute, a metaphorical Pinocchio who always wants to be a real (spider) boy. Thematically, Beyond is a great foil to tease those ideas out. Most stories where Marvel has tried to make superheroes go corporate, there’s a lot of consideration of logistics, but rarely has a series been so incisively critical. Past attempts at the idea, like in Grant Morrison’s “New X-Men,” the final run of Peter David’s “X-Factor,” the recent series “X-Corp,” and even “Spider-Man: Worldwide” all show how the resources of a corporation could bolster the fight against evil. And even though there are a couple of likable Beyond employees, and even if they are ostensibly on the side of the hero, the story never loses track of how shady working for a corporation feels.

That’s why the central metaphor of this series lands so well. Ben’s biology and even his memories are borrowed from a real person. He’s searching for a unique identity, something that will let him feel like more than a shadow of another person. And Beyond is a terrible place to do that! They’ve proven to be utterly dehumanizing. They monitor Ben, invade his privacy, and surround him with fake friends on the company payroll. It would give anyone an identity crisis, and it’s that much worse when it’s someone as vulnerable as Ben.

The use of Doc Ock is another master stroke. Otto after all, has had something of his own identity crisis when he tried to become the Superior Spider-Man. The issue doesn’t forget about that, and draws a lot of parallels between the two men who both are trying to prove that they are better than the original article. Ock is superficially the villain of this story, but the writing never forgets that actually, he’s probably a better ally to Ben than his actual allies at Beyond.

It also helps tremendously that the artwork- penciled by Paco Medina- is always clean and clear. There’s a lot of dynamic action in a Spidey book. A lot of cool poses, smoke, explosions, crowds. Even in the chaos, Medina preserves the focus. One of the hardest things to do in comic art is consistently draw lots of different characters, distinctly, so they are easy to follow. In a story with clones and duplicates, that’s extra important. Ben looks a lot like Peter, but you never forget this is a different guy. You might worry that a book with six credited inkers would feel artistically inconsistent, but if I had skipped reading the credits, I never would have guessed.

The art sells Doc Ock as a bruiser and a menace. He’s BIG, imposing, craggy. But something about the stiff way he stands, and how he uses his arms when he speaks, that’s downright erudite. The story in this issue is heavily rooted in characterization, and that comes across just as much in the art as it does in the writing. That’s something that should happen all the time in comics, but doesn’t. It’s good basic storytelling. And “Amazing Spider-Man” should feel like the Big Mac of superhero books- tasty, reliable, unsurprising.

But it is surprising. It’s a shock that a comic executes this premise so well, and it’s a shock that having so many cooks in the kitchen produced something this good. The ‘Beyond’ era isn’t set to last all that long, but I can already tell I will be recommending it to comics-curious friends for years to come. As comic books go, it’s not the most original story I’ve ever read, but it’s well executed, and never any less than a great time. By finding strong thematic connections between a Spidey clone, a classic villain and a surreal corporation, “Spider-Man Beyond” is a superhero story that will stick with you.

Final Verdict: 8.4 – What could have been a run of the mill replacement superhero story finds some compelling themes to consider amidst all the clones and chaos.