Bryan Hill went from a name on the fringe of comics to someone who, seemingly, is overflowing with projects. The comics world is better for it, as Hill has been doing really interesting stuff across his various books. “American Carnage” is one of the new Vertigo series launching this fall, and it is overtly the most political thing Hill has written. Does his embrace of the current political moment work, or make the book feel overwrought? Keep reading for our spoiler-free review of the first issue, due out in November. 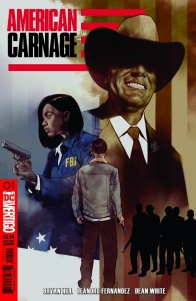 In this thrilling crime saga, disgraced FBI agent Richard Wright, who is biracial but can pass for white, goes undercover in a white supremacist group believed to be responsible for the death of a fellow agent.

“American Carnage” is about making sense of pain. The story begins with the death of an FBI Agent, and how that spirals out into the various attempts to get to the bottom of his death. There are easy answers that get rejected and difficult answers that aren’t deemed worth following. The story, above all else, is about trying to find meaning in what can seem meaningless.

What makes the story different is that the person searching for meaning, Agent Curry, isn’t able to do the digging. Her hands are tied, and so she has to outsource her pain to Richard Wright (not the late Pink Floyd keyboards player), a former agent who is now reduced to being a low rent private detective. Wright is coming at this from a non-emotional standpoint, which releases some of the tension, but also allows the story to do unexpected things.

At the center of the investigation is Wynn Allen Morgan, an author/public speaker we don’t know all that much about, except for the fact that he seems to attract a very conservative, very white audience. He’s a character that, even with the extremely broad strokes we see here, is instantly recognizable as a creature of 2018. Ten years ago, he would’ve seemed like a cartoonish exaggeration; the conflation of conservatives and white supremacists used to be the fodder of lazy comedians and your crackpot uncle. But now, with actual white supremacists working in the highest level of government, Morgan seems actually pretty tame.

But that doesn’t absolve him of danger, and we can pretty instantly see just how dangerous he can be. He’s charming, he has a well organized operation that, on the surface, seems to be on the up and up. This is where Leandro Fernandez shines the most throughout what is a truly beautiful issue. His Morgan is, depending on the lighting and angle, either stately and handsome, or slimy and grotesque. That’s a tough trick to pull off, because the character needs to be recognizable in either state, and Fernandez manages to pull that off.

Fernandez bathes this issue in shadow, which Dean White complements with his bold, beautiful colors. Each scene has a distinctive color palette that isn’t over the top, but gives an episodic touch to the issue. The characters are intense, and Fernandez has no trouble conveying that intensity through his artwork. Even Wright, who for much of the issue is adopting a posture of being down on his luck, still simmers under Fernandez’s pencil.

Fernandez and White portray a Californian setting that isn’t what you typically see in media representation. There’s no sunny beaches or posh restaurants. “American Carnage” is set in diners and low rent apartments, with characters speaking Spanish naturally and no one trying to come off as something they aren’t. And yet, the book feels profoundly Californian at its core; this story wouldn’t really work as well elsewhere.

First issues can be tough to review because, despite having a clean jumping on point, it can be a little tough to tell exactly what the story is. While we know the broad strokes, the issue ends at the very beginning of what will likely be the thrust of the series: Wright infiltrating Morgan’s world. All we know of these characters, really, are what they are projecting to the world: Morgan is a success, Wright is a fuck up, Curry is grieving and looking for justice. All of these characters wear interesting masks; it will be telling just how interesting they are when the masks come off.

“American Carnage” #1 walks a fine line between being all setup and establishing a tone that the series will use for the entirety of its run. While the tone it sets is an intriguing one, full of real world issues that are incredibly important, it could have gotten to its conclusion a little earlier. A lot of the set up here would’ve worked just as well parceled out over time through flashbacks or dialogue – especially the reason for Wright’s dismissal from the Bureau – and instead packs the issue a little too full of backstory. The issue does intrigue, and does invite the reader to come back for more. Isn’t that what first issues are supposed to do?

Final Verdict: 7.2 – A strong start to a series that looks to help re-establish Vertigo as a line of substance and depth.