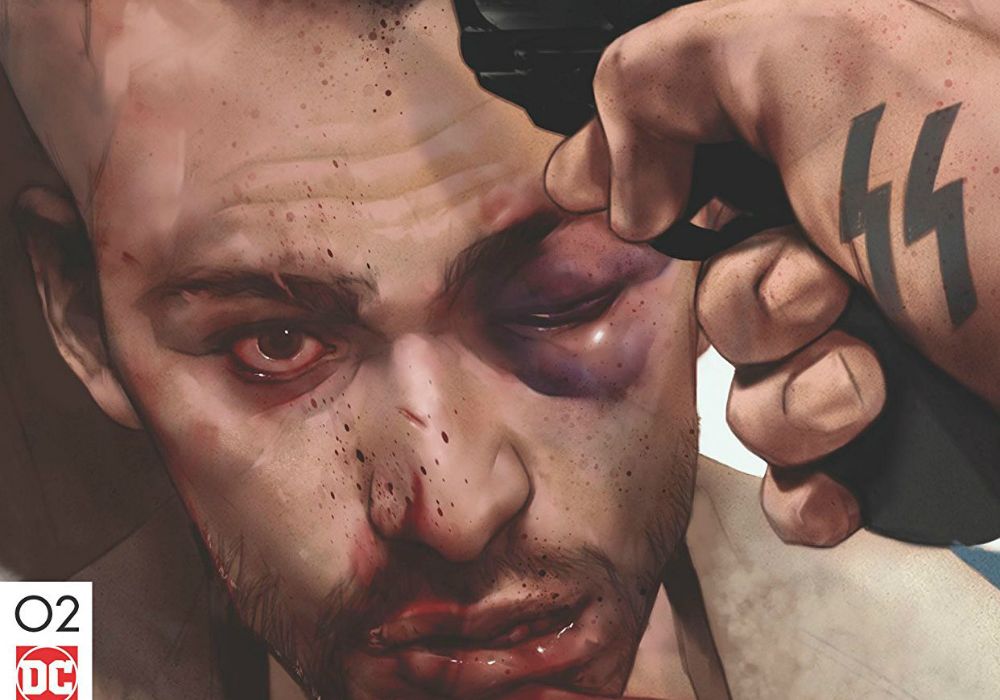 With its second issue, “American Carnage” continues to impress. Bryan Edward Hill and Leandro Fernandez create an exciting, tense issue, following former FBI agent Richard Wright as he infiltrates a white supremacist compound. Read on for our review, but be warned, there will be some minor spoilers. 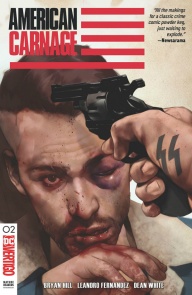 Written by Bryan Edward Hill
Illustrated by Leandro Fernandez
Colored by Dean White
Lettered by Pat Brosseau
Richard Wright is a white-passing African-American FBI agent operating in a white-nationalist gang, and his mission to solve the murder of a fellow agent is already going off the rails. While Richard’s target, the industrialist Wynn Morgan, discovers some potentially deadly dissension in the ranks, Richard is challenged by Morgan’s rebellious thugs to prove his loyalty to the movement in the most dangerous way possible.

Picking up right where the previous issue left off, “American Carnage” #2 begins with Richard being thrown headfirst into white supremacist gathering he stumbled into during the previous issue. During this sequence, we are able to learn a little bit more about Richard, and in turn learn quite a bit more about Wynn Allen Morgan, the leader of the white supremacist group Richard is trying to become a part of.

Leandro Fernandez does a great job of portraying the sequence in which Morgan is questioned by one of his subordinates, creating tension and showing how calculating Morgan is. The man questioning him is old, white, with a haggard, wrinkled face. But we never see Morgan. Fernandez keeps Morgan’s face in shadow in every panel of this issue, with only the white hair on his temples standing out in the darkness. This choice works in a number of ways, first giving Morgan a distinctive profile, setting him up as the villain going forward. Second, it creates a sense of mystery and menace for Morgan. Richard still doesn’t know much about the white supremacist leader, and as readers, neither do we. In fact, we still don’t even know what he looks like.

Of course, this air of mystery and menace would be nothing without Morgan having the words to back it up, and in this regard, Bryan Edward Hill does more than provide. His script gives Morgan a sense of sophistication, a self-assuredness that, in and of itself, is threatening. In the conversation between Morgan and Richard, Hill lets readers see how Morgan talks to the people he thinks are his lessors. There is a condescension when he speaks to Richard, who is undercover as a down on his luck white trash. It’s an interesting wrinkle that Hill gives the character, one of many pieces of characterization in this issue that help bring the characters to life.

The coloring, by Dean White, brings a huge amount of character to the setting as well. White’s colors work well with Fernandez’s shadows, and his style. When Richards meets his FBI contact in a diner, there is a sun drench, washed out quality to the light seeping in through the blinds. At Morgan’s house the night before, with a cross burning in the background, there is a harsher, quality to the light. One that follows Richard into Morgan’s home, when he has his meeting with the leader in front of his fire-place.

Pat Brosseau also does a very good job of lettering the book. Hill’s script is a bit wordy in places, though it doesn’t feel that way when reading it. Much of this comes down to the way Fernandez and Brosseau work to make space for the text balloons, and the way that Brosseau controls the flow of each panel. The way that Brosseau and Fernandez work together to use negative space in this issue is really well done. It makes the comic flow beautifully, though never draws attention to itself unless the reader is looking for it.

With “American Carnage” #2, Hill and Fernandez prove that they still have an eye and a talent for final pages. I wont spoil the cliffhanger for this issue here, but I will say that it packs even more of a punch than the ending of issue 1, which ended with Richard stumbling into a white supremist gathering. While the art isn’t perfect in this issue, Fernandez has a way of structuring a page that makes shocks, especially ones like the final page of this issue, hit the gut with a very solid punch.

“American Carnage” #2 is an improvement on the first issue. While the first issue spent much of its time focused on the backstory of characters and exposition, this issue is much more content to let the story ride with its characters. With so much of the back story out-of-the-way after issue one, this issue is free to get to the hearts of its main players, and really see what makes them tick. This issue does a great job of feeling like a complete chapter to this story, while also leaving the reader wanting more. While there are a lot of comics out there that read far better in trades, “American Carnage” feels like one that is worth picking up monthly.

Over all, “American Carnage” #2 is a really exciting book. Improving on what was already a pretty strong debut issue, this book has just kept getting better. I cannot wait to see where the story goes, and what kind of twist it will take as it goes forwards. This is a tense, character focused book. It is a book about issues facing America today, and a book that is definitely worth reading.