Seemingly written for fans of the source material rather than new arrivals, “American Gods: Shadows” #2 continues to be a welcome story for both groups, whether to see the words transformed into artwork or to see the inter-deity intrigue unfold for the first time. 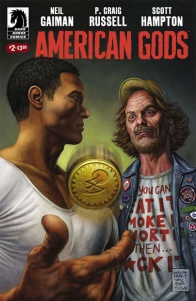 Fresh out of jail, Shadow Moon finds himself recruited as a bodyguard for the enigmatic Mr. Wednesday, only to be interrupted and kidnapped by the dangerous Technical Boy, who wants answers as to Wednesday’s plans.

For readers of the source material, “American Gods: Shadows” #2 is best read as a near word-for-word retelling of the same plot, down to the chapter breaks. This style allows it to be an exceptionally faithful adaptation of the original work, to a degree that is rarely seen in other adaptations. In fact, such a format leads the solicitations (such as the one above) as something of a spoiler as to what happens in each issue, making the read all the more interesting for how it all measures up on the visual front.

P. Craig Russell and Scott Hampton work together very well in recreating both the story and the artwork. Due to the fact that their work together is so integrally meshed, it seems appropriate to address each individual’s contributions, over splitting between writing and artwork in and of themselves.

P. Craig Russell manages to put his own flair into Neil Gaiman’s quotations. Beat panels, moments of silence, even the unspoken reactions of characters from the source are expanded on by the spacing of dialogue and scenes. “American Gods: Shadows” #2 is a living document where changes can be made to enhance the story as it was known. In this new medium, Shadow’s stoicism in the face of a world of the magical he is only just entering is even more pronounced, giving a depth to his character that seems to even improve upon the original prose. Mr. Wednesday’s amorality receives  similar treatment, as does the absurd balance between the ridiculous and the dangerous that is represented by the Technical Boy. The only true problem to be found is the fact that the issue ends on an awkward note, a bit too late for the end of the issue to have as much impact. Then again, this awkwardness may have been the point, enabling the reader to get further into Shadow’s shoes while also continuing the near word-for-word reproduction of the source.

In addition to the script, Russell provides the layouts for “American Gods: Shadows” #2. Character placement and visual perspective both play a major part in adapting the source, with focuses on the foreground and background equally important to the middle ground. Depending on the scene, it allows Shadow to be in the middle of the audience’s attention, or shift into the back of their minds, much like he himself does throughout the story.

Scott Hampton’s illustrations are vibrantly emotive where they need to be, thereby enhancing the responses — or more often lack of response — Shadow seems to exhibit throughout the story. Instances of magic are shown, but not overly emphasized, letting them seem to meld into the rest of the story in a natural way that is often missing from other supernatural plots. At times, he doesn’t even draw a background at all, letting the empty white space speak for the importance of the people inside it, rather than take away from them. Where Shadow is not playing a part himself in the story, but rather watching it happen, Hampton’s artwork takes a wide view, focusing in on the situation rather than any one person.

Outside of the illustration, Hampton is also responsible for the coloring in “American Gods: Shadows” #2. The colors seem to emphasize differing amounts of light, they seem muted when around the Old Gods, and far brighter around the Technical Boy, one of the new guard. The gas pit stop where Shadow and Wednesday meet Mad Sweeney is dark, with a lot of emphasis on the shadows of the place and an overall color scheme of brown and grey, giving it an overall feel of a run-down place. The only real exceptions are in violent moments, as if to show that violence is what make the Old Gods feel alive. On the other hand, the Technical Boy’s limousine is filled with LED lights in sky blues and pinks, and is almost intrusively bright, not to mention just a bit silly in how he seems to need so much of a figurative spotlight. This dichotomy helps the reader to empathize more with the old ways, but also feel sorry for the fact that they only feel right when in the midst of bloodshed or pain.

Rick Parker’s lettering also helps to give increased meaning to the story. When people are yelling, the lettering does not simply bold their words, but rather write over them several times, making the overall effect seem cruder, but more natural at the same time.

Both as a comic adaptation and as a story on its own, “American Gods: Shadows” #2 continues to impress with its seamless integration of the mundane and the fantastic, creating a fascinating world not through overly dramatic scenery, but through a very intriguing slow burn.

Final Verdict: 7.5 – A well-drawn and well-written adaptation of a portion of the eponymous novel that captures the growing intrigue of the Old God/New God war well.