BOOM! Studios are back with a sister title to complement the excellent “Buffy” ongoing series. The title is written by rising star Bryan Edward Hill who has been the mastermind behind acclaimed DC Comics like “American Carnage” and “Detective Comics.” Hill’s recent projects should delight readers looking for a writer who has a fresh voice to take on the “Angel” property. Artist Gleb Melnikov is joining Hill as a newer creator. BOOM! Studios have seemingly assembled the right creative team for the job, so why does “Angel” #1 lack the clarity and vision of the television series and sister title from the publisher? 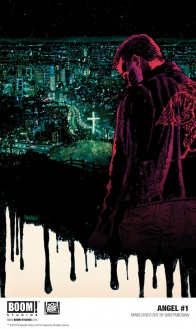 Meet Angelus, leader of an army of brutal vampire warriors terrorizing the land, hungry for power and thirsty for blood as he invades villages and takes innocent people past the point of no return. Several centuries later, Angel spends his time protecting humanity from the monsters that lurk in the dark in an attempt to redeem himself for the crimes committed by the monster he was when he was first turned. It may be that he’s too late to save his humanity and his soul but he’s lost too many people in his ongoing fight against the forces of evil, and he’s finally ready to find a solution to his tortured existence as a vampire with a conscience. When his path leads him to an old friend in Sunnydale, sparks will fly and demons will clash as Angel’s search takes him ever closer to the person who could end his quest before it’s even begun—the Chosen One, Buffy Summers.

The “Angel” property carries a lot of baggage inherent in the premise of the title. Despite the good he’s done for so many years, “Angel” carries the burden of fighting against his own nature to protect others and right his past wrongs. Author Bryan Edward Hill has a good foundation of the premise but doesn’t advance the comic past some of the more broad ideas of the property. In the debut issue of the new “Angel” series loosely based on the television show, Hill goes over some introductory ideas before folding a new supernatural demon for the protagonist to go up against. Artist Gleb Melnikov’s pencils do a solid job exploring the foundation of “Angel” but feel too brisk and light for the dark world of “Angel.”

My biggest problem with Hill’s “Angel” debut is the first sequence. The first half of the comic shows the nature of “Angel” in the context of his past. This sequence is problematic because it doesn’t relay much new or interesting information to the reader. While it is important for Hill to show people starting with this comic for the first time that Angel is making up for the sins of his past, allowing half the debut chapter to be broken up into a boring flashback sequence is a disappointing way to structure the opening. By the end of the debut issue, Hill barely has a solid supporting cast of characters and premise established to go off of.

Melnikov’s pencils carry strong energy and convey the present day sequences surprisingly well. Melnikov’s work makes him appear out of his element in the first half of the title. Melnikov’s art is not suited to the ultra-dark tone and period setting of the first half especially. It is interesting to see this sequence captured with his exuberant and kinetic line, but the drama the sequence was trying to evoke was cut short for me based off of Melnikov’s more simplistic figures. The latter pages of the issue are lacking some important details and only show the essential elements of the comic book page. While his page compositions can also be minimalistic, Melnikov’s framing and panels capture the most interesting parts of the scene.

“Angel” #1 carries a pretty straightforward message, committing to the idea that social media is bad and our phones take away some of the empathy we feel for others. While the idea definitely carries truth, “Angel” #1 doesn’t have anything interesting to say past the more vapid plot beats and supernatural threats established in the book. For individuals familiar with the premise who have seen the television series this debut script is particularly weak. The worst episodes of “Angel” never developed their ideas into an entertaining plot. The cliffhanger for the title closes the issue on a sour note that may not merit readers coming back for a second issue.

Hill’s script for “Angel” #1 is incredibly dark, touching on some really harrowing violent and sexual themes that may not be for all readers. Upon examining the issue in further detail, I can’t help but feel that these elements are played up just to add more conflict to the issue. The mature subject matter does not add nuance or motivation to the story. Hill does a good job adding in the supporting cast members who have distinctive voices from each other. I’m also looking forward to more characters from the television series and Buffy herself to make an appearance in the issue.

Despite good intentions and a solid creative team, “Angel” #1 was a huge disappointment on nearly every front creatively. The issue was a more isolated experience that doesn’t carry the beloved ensemble cast or warmth from the series. Hill’s script for the issue is needlessly dark and Melnikov’s pencils do not feel entirely suited to the work Hill is trying to capture. With so many elements of the original series lacking from the debut, the title could definitely have the potential to right some of the wrongs from this frustrating and uneven debut for the series in future installments.

Final Verdict: 4.4 – The dull script and artwork for “Angel” #1 lack the charm of the beloved television series and sister title.