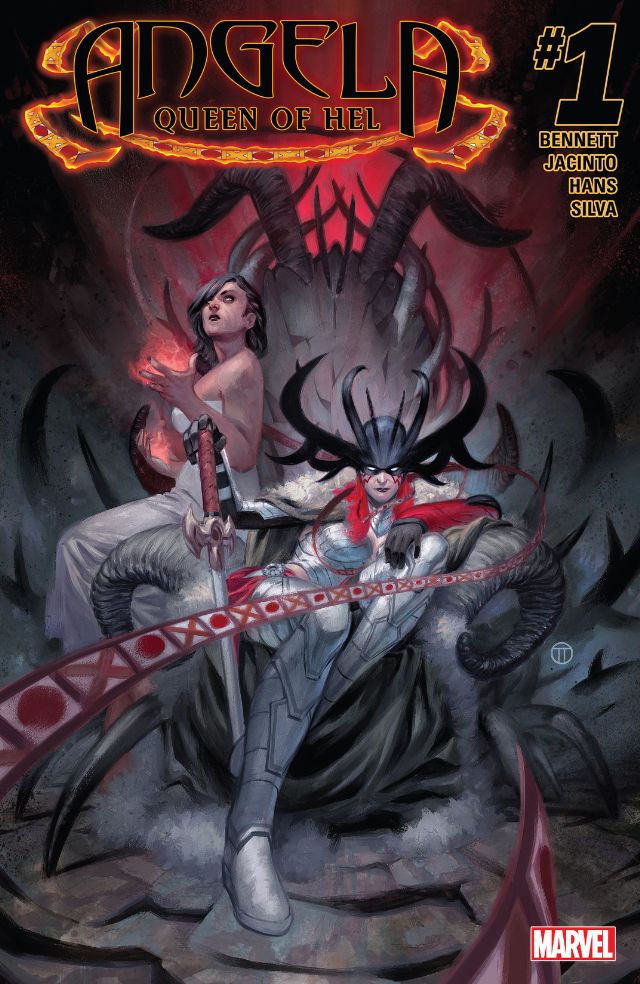 Angela takes to Hel to save her beloved Sera. “Angela” Queen of Hel” #1 continues the adventures of “Asgard’s Assassin” and establishes a new status quo. Read on for our review of this first issue but be warned, there are some spoilers. 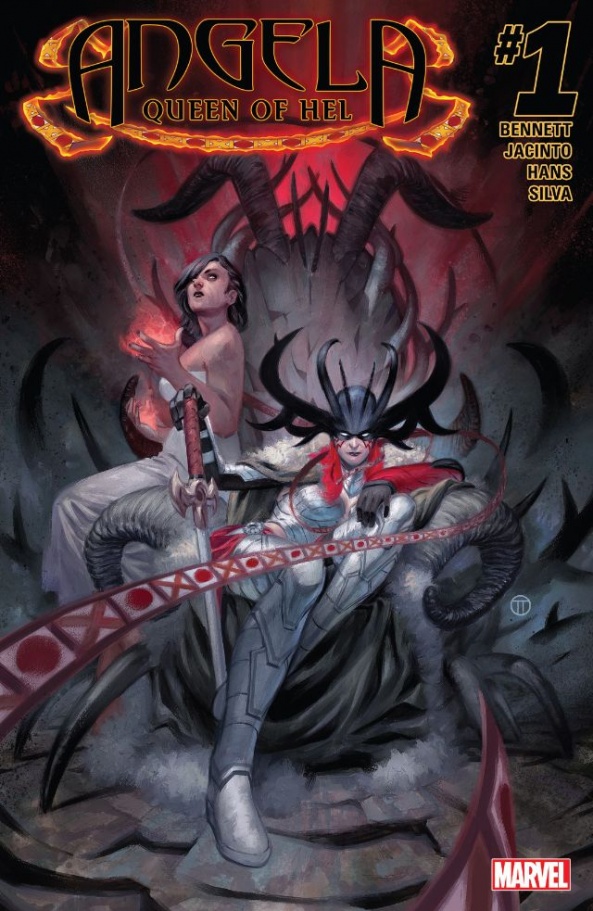 Written by Marguerite Bennett
Illustrated Kim Jacinto and Stephanie Hans
HEL HATH A NEW FURY. Stolen from ASGARD, exiled from HEVEN, and robbed of SERA, her greatest companion – ANGELA plunges into the depths of blackest HEL to save her friend…and once there, the lost princess of Asgard will carve out a realm of her very own. All hail ANGELA, THE NEW QUEEN OF HEL

“Angela: Asgard’s Assassin” was the start of a brand new incarnation of “Spawn” character Angela. She’s been revealed to be half Asgardian and in her first series, she fell in love and had that love taken away just as fast. Angela and Sera’s deep friendship and romance has been the core of this series and in “Angela: Queen of Hel” that all comes back but also puts the two characters in a setting that will test them. It’s a solid way to return after “Secret Wars” but does struggle a bit to connect on an artistic level, at least in the main story.

“Angela: Queen of Hel” #1 begins with a narration by Sera that very much tells us where things are with this story. Angela is the Queen of Hel and Sera is her royal consort/red right hand. After Sera was taken to Hel, Angela went to get her, but of course Angela isn’t satisfied with simply saving her. Once in Hel, Angela finds that Angels that have passed on serve as slaves to Queen Hela and this becomes another mission for her to carry out. In the substory, Sera and Angela go on a journey that reunites them and challenges Angela in a deeper sense.

As far as a jumping on point, you could do a lot worse than this. Through the first couple of pages you are presented with a full catch-up of what’s happened up to this point. Under usual circumstances I would complain about this but I do think writer Marguerite Bennett does the book a favor by having this told from the perspective of Sera. That perspective is the best part of “Angela: Queen of Hel” #1. Angela’s name is on the book but Sera is very much the star of this issue thanks to her narration, her much more optimistic nature and her powers. Sera was never truly in the corner acting as just a girlfriend but in this issue she feels far more the star than Angela and it’s not really a bad thing. Angela purposely isn’t too complex, she’s like her brother in many ways, so surrounding her with a cast of supporting characters who can give readers what she can’t (like a genuine laugh) is important.

For all the valid critique Marvel has faced over the last few months about the representation issues, “Angela: Queen of Hel” has a real LGBT relationships that wasn’t hastily thrown together. The relationship between Sera and Angela has been building since before issue one took place so I do like that this has never felt hastily tossed together. It’s the only Marvel series that I can think of where romance is at the forefront but doesn’t weigh down any of the characters. Bennett lets us feel that romantic high but also keeps us firmly in an action fantasy setting.

Where “Angela: Queen of Hel” #1 hurts itself is in the art. The main story was drawn by Kim Jacinto with colors by Israel Silva. Immediately I felt like I was looking at something done during the ’90s. The character expressions are very stilted and a couple of points Angela has this pained expression that doesn’t suit her. Her new look doesn’t look like armor. There’s nothing metallic feeling about what she’s wearing and there’s such a lack of grace in her movements. She’s an Angel and an Asgardian and with that comes the rage of a warrior but also the grace of a dancer. It’s something that Stephanie Hans does fabulously in all her work but in the main story of this issue, it’s almost all off. Sera is given a very glam makeover but it’s almost too much. She’s much skinnier in both her body and face and that’s the aspect that doesn’t work. The strength of her magic and the flowing white dress work as kind of a mirror to the darkness of this section of Hel. It also reflects her inherent goodness.

In contrast, Hans is able to capture everything about these two characters and continues to work her own kind of magic. Her painted pages are just wonderful to look at and study. The character designs are perfect with the armor of both characters looking fully realized and protective. There is that blend of grace and rage in Angela’s movements but most importantly, the big kiss scene between the two of them swells with romance. The scope of it and the way it’s angled is very old Hollywood and Hans is able to capture true passion and lust in the kiss without getting gross.

“Angela: Queen of Hel” #1 is a very good debut but some art problems hurt it. It’s accessible but continues the established storyline from “Asgard’s Assassin” so for fans of this character, it’s not something you’ll want to skip.

Final Verdict: 7.0 – A solid debut that fans of these characters won’t want to miss. Hopefully the art issues can be fixed as the series goes on.