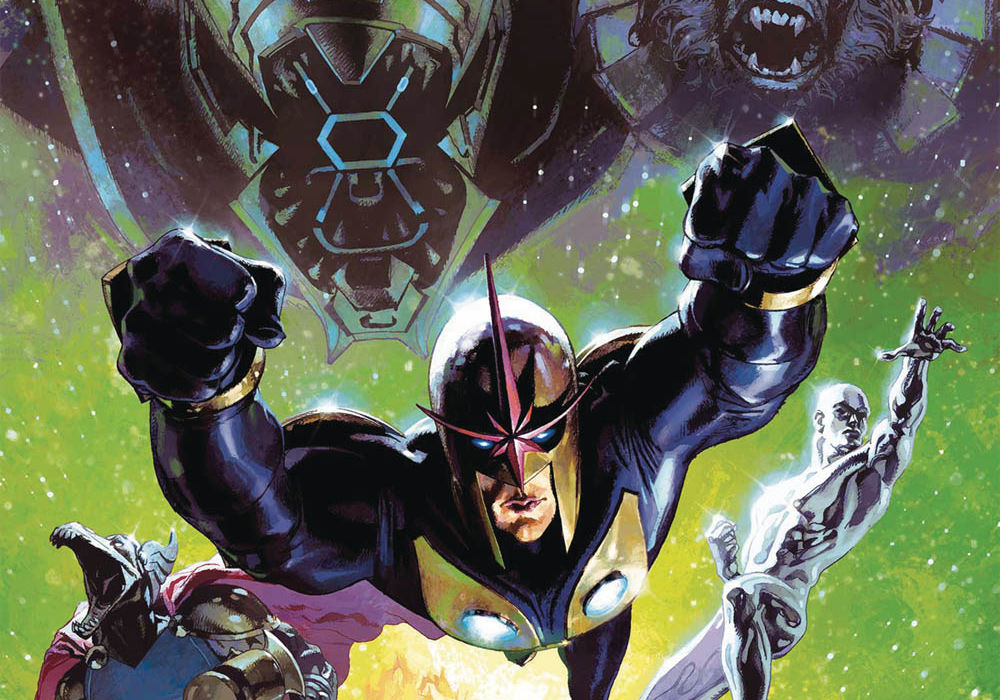 A hero is only as good as the villain they face, which is probably why comic books have given us some of the greatest villains ever written.

The funny thing is, within the pantheon of great comic book villains, there exists a surprisingly specific yet incredibly prevalent villain type: the immortal and always hungry hive mind that seeks to spread and take over the world.
“Annihilation: Scourge Alpha” #1 introduces another hivemind type super villain into the Marvel pantheon. Let’s see if and how they make it different. 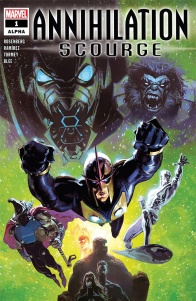 As stated above, the story of “Annihilation: Scourge Alpha” #1 has a hive mind villain that seeks to take over all life and spread across the stars, it’s only motivation is that it seems to earnestly believe that what it is doing is a good thing. This time, the omnipresent Hive Mind has set its sights on the Negative Zone and is determined to spread itself through this universe and beyond. However, it’s not without opponents as this entity finds itself facing off against long time Fantastic Four villains Annihilus and Blastaar. It’s a slow, desperate battle for survival and eventually forces Annihilus to travel to the main Marvel Universe for help.

This set up is a pretty familiar one for long time comic book readers, and as a result it’s kind of easy to figure out what will happen and how the story will play out. The idea of massive groups of flesh hungry creatures who were once human is a popular one that we’ve seen in stories like ‘Marvel Zombies’, ‘The Walking Dead’, and ‘DCeased’ while entities that control a collection of heroes like a hive mind has been done in stories like ‘Blackest Night’. With the sole exception of the last page of the comic, ”Annihilation: Scourge Alpha” #1 doesn’t really do a whole lot to make itself different from any of the dozens of villains and story lines that revolve around using mass mind control to take over the universe.

However, what “Annihilation: Scourge Alpha” #1 might lack in originality, it more than makes up for it with character work. Writer Matthew Rosenberg does a great job of taking two unsavory characters like Annihilus and Blastaar and making them relatable and sympathetic. In the beginning, these two characters hate each other with a passion that could destroy planets and they think that this current crisis is the other character’s fault. However, over the course of the issue they begin to develop a begrudging respect for each other, even if it’s the kind of respect that can only exist when they are on the brink of losing everything. It’s a fantastic bit of character development for a pair of relatively obscure super villains.

Besides having well written characters, it’s also an incredibly dense and well-structured comic. Even though it’s a larger than average comic clocking in at twenty-nine pages, it feels like a much larger book. There’s a very definite sense of time added to the frantic desperation of the characters. The comic takes place over two weeks and on several planets and the single issue makes the reader feel like these are the longest two weeks of their life. Even though “Annihilation: Scourge Alpha” #1 is setting itself up to only be a six issue miniseries, it feels like it’s a much longer story.
While the writing uses its density to create a comic that is tremendous value for money, that same density does have a slightly negative impact on the artwork. To be clear, artists Juanan Ramirez and Cian Tormey, along with colorist Fedrico Blee, have created a comic that looks great. The characters are well drawn, the cartoon style lends itself very well towards some great dynamic posing and action, and the colors are amazing at portraying bright explosions and bursts of energy. Ramirez and Tormey understand how to use panel layouts to enhance the story and the art is at its absolute best when it uses splash pages to lend a huge amount of weight to a truly epic story.

Sadly, while the combination of the art style and colors is great for action and explosions, it can get a bit overwhelming when the comic needs to quiet down and share important story information with the reader. Since there’s so much going on in the story the artists have to create quite a few pages with high panel counts and lots of extreme close ups of characters talking. This makes it kind of difficult to get a sense of the geography of the scene and people who aren’t used to reading comic books might find it all a bit hard to follow.

“Annihilation: Scourge Alpha” #1 is a fantastic, if only slightly over crowded, superhero comic in the purest sense of the word. The stakes are the highest they can be, the combat is tense, and the violence and stress goes on to create some fantastic character development. Definitely worth checking out.

Final Verdict: 8.5- A great super hero story that is well planned, well written, and well drawn. The only reason the score isn’t higher is because it can be a little difficult to follow at times.